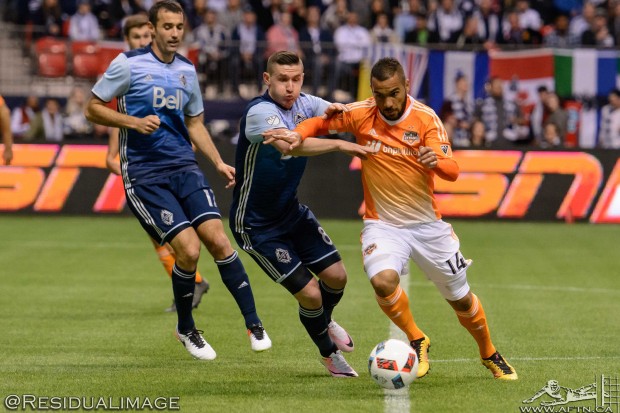 A win, is a win, is a win in professional sports. Doesn’t matter how you win the game. If you win by a penalty kick that you didn’t deserve, an own goal by the opposite team or a set piece you earned with hustle. That is the beauty of football and the fact that it’s not computer technology that makes decisions during the game. Sure it is nice when you come out on the top of these calls, but enjoy it while you can because before the year is over the football gods will have made calls that don’t help the Whitecaps.

After a dominant opening 25 minutes that saw the Whitecaps dominate all aspects of the game, they were able to grab that crucial first goal and hang on for their first home win of the season. In doing so, they improved their record to .500 after the first four games played.

So with all that being said let’s take a look at The Good, The Average and The Bad from Vancouver’s 1-0 win over Houston on Saturday night.

Fraser Aird’s Ability To Get Up The Wing

After struggling the first half versus Montreal Impact, Aird has settled down nicely into his right back role. He had a very solid second half against Sporting KC and two great starts against Sounders and this game against Dynamo.

His ability to get down the wing this game created some great chances for his teammates and really pushed back the Dynamo midfield players tracking back. He had some less than quality defensive plays late in the second half but was able to track back before Dynamo could do some real damage.

Look for Aird to get the start next week against the LA Galaxy and Jordan Smith to be sat on the bench for the foreseeable future.

Another game and more chances missed for Rivero. We have seen this story before. With the recent quality play of Blas Perez and Masato Kudo, is it time for Rivero to be sent to the bench for a game or two? Maybe a kick in the ass would be the wake up call needed for Rivero to find his scoring touch for this team.

Having a Designated Player salary in the MLS means that you have to get results. You can’t take up that much salary and not do what the manager brought you into the team for.

This is a MLS salary cap world and all the players have to live in it.

Since June 27th 2015, in Manneh’s last 21 MLS starts, he has 4 goals (July 4th vs Rapids, August 15th vs Sporting KC, where he scored two goals, and October 25th vs Dynamo) in 1,530 minutes. Over those 21 games he has missed numerous easy scoring opportunities and by keeping his head down has missed easy passes to open teammates who would have better and often easier chances on goal.

This head down at all times problem is the most frustrating of all his mistakes. He has the speed to get down the wing or into the middle of the pitch any time he wants. But time and time again he has his head down looking at the ball and the defender just steps up so Manneh dribbles the ball right into his feet. If he would keep his head up he would see that defender step up and be able to lay off a pass to his streaking teammates or be able to make a move to get past the defender.

He needs to start making more of his offensive chances before he finds himself on the bench behind all the players that Carl Robinson has brought in for competition at all positions.