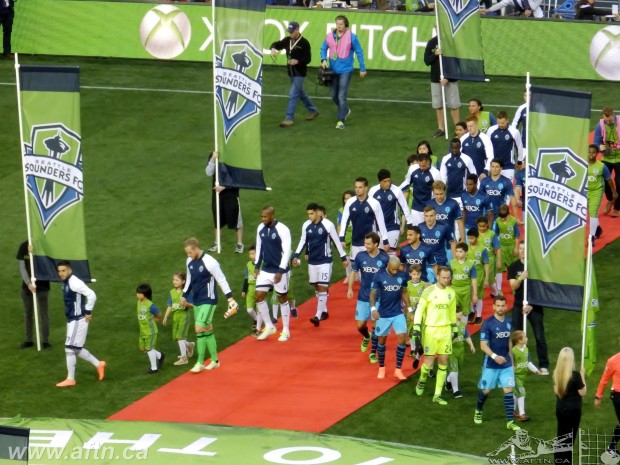 Welcome to Cascadian football at its finest.

This game had everything that is great about this game of football. We had controversial penalties, rough physical play and a former Whitecaps bad guy, Blas Pérez, playing the role of hero.

Nowadays, derby games are too PG for my liking. Too many supporters being friendly with the other teams supporters. Missing is the tenacity and hatred for one another that makes these derby games beautiful all over the world.

Supporters should live and die with their team, no matter who is on the team and wearing your team’s home kit colours. Even if the new players were enemies before, you stand and sing their name when they are on your team. This is a game of passion, loyalty and undying support. It’s a game where villains of the past are heroes of the future.

With that being said, let’s take a look at “The Good, The Average and The Bad: Three Point Theft At C-Link Edition”.

Say hello to the bad guy

Blas Pérez came up spades for the Whitecaps down the I-5 in Seattle. He is never a player to shy away from physical play and creating controversy and this game was no different. The first two weeks saw Pérez come in as a second half substitute and bring a spark into both games. Carl Robinson was banking on the same outcome when starting Pérez next to Octavio Rivero for this game and it worked out for the young manager.

From the start of the game, Pérez was able to draw defenders to him and get the pressure off Rivero, meaning the Uruguayan wasn’t stuck alone on an island for once.

Pérez was able to set up the opener with a beauty of a through ball to Christian Bolaños for the ‘Caps first penalty kick of the game. Foul or no foul, the referee called it and Pedro Morales stepped up and gave the Whitecaps the lead. With the game tied at 1-1, Pérez made a veteran move and initiated contact with Chad Marshall to get the penalty call and give the Whitecaps the win and three points to declare at the border crossing.

Robinson brought Pérez in to make a difference for this team and three weeks into his Whitecaps career he has started to live up to the coaches expectations.

All the talk last season, when Rivero was in his scoring slump, was that he still did well at the other parts of the game to justify being a starter, with his work rate and hold up play.

Why should we settle for average this season?

With bringing in Pérez and Masato Kudo, their job is too push Rivero for starter minutes this season. How many almost goal chances are the coaching staff going to give Rivero before they light a fire under his ass and place him on the bench for a few weeks?

Sooner or later Rivero has to step up and earn his Designated Player salary for this team. It wouldn’t matter in most leagues and he would be on the bench, but with the MLS being a salary league, the team’s hands were tied late last season.

If you believe in using excuses, you can say that Manneh is still struggling with his ankle niggle from late last season and this preseason. This is professional soccer and these players get paid to play a game that millions worldwide play for free. Plain and simple, Manneh was not good enough this game.

He was invisible most of the match and never made an impact on offence or defence. If it wasn’t for Cristian Techera coming into training camp unfit and not up to speed, there is no way Manneh would have started this game. Techera is still not up to full fitness and Robinson let him know that is not acceptable by moving him to the bench.

Manneh is a great young player and needs to play week in and week out like it’s his last game. He needs to realise he cant put it on cruise control and float through a game. The supporters of this team will notice, like they did with the newly departed Darren Mattocks, and he might not be able to win the support back if he can start making a difference for this team moving forward.