Good old Vancouver Whitecaps. Canada’s sweethearts and the only Canadian side in MLS this weekend to not only score, but to get any points.

They did that with one Canadian player starting, Fraser Aird, who played for the full 90 minutes. Will Johnson was the only Canadian player to start for Toronto, also playing the whole match, with both Mo Babouli and Jay Chapman seeing their first minutes of the year as late subs. Montreal had no Canadian starters, but Anthony Jackson-Hamel came on for the final nine minutes of their loss in Dallas, forcing a save from the keeper.

Eight Canadian players saw minutes this weekend, a drop of two from last week, with Cyle Larin being the only other starter for Orlando, grabbing his third straight goal before having to leave the game early due to illness.

The full stats for Canadian players this week reads as follows:

When it came to goals, as we mentioned, Larin made it three in three for Orlando with this strike to seal the points against New York City in a 1-0 win.

While Tesho Akindele came on as a late sub again and grabbed this assist on Maxi Urruti’s second goal for Dallas in the 2-0 win over Montreal.

There’s a quietish week coming up with the international games, but after Week 3 of the 2016 MLS season, here’s how your 27 Canadian players are faring so far: 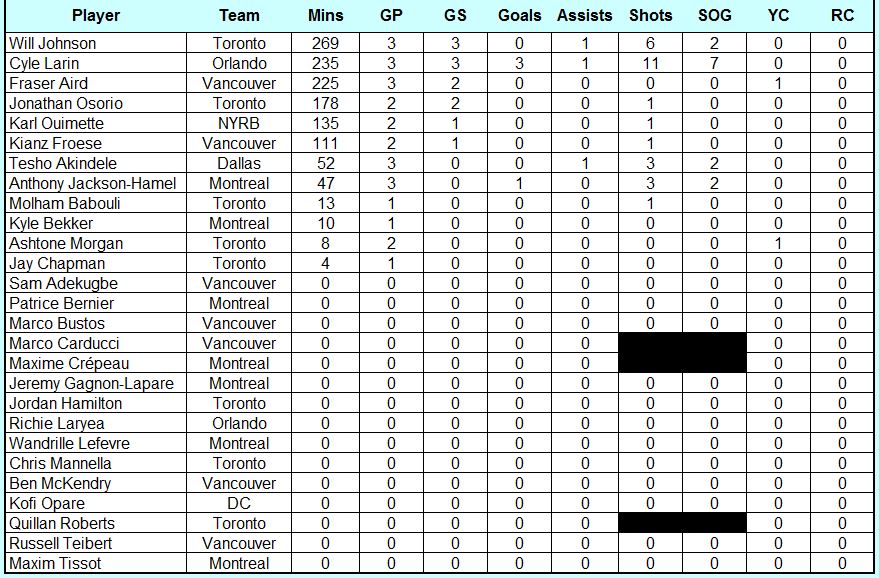 As we mentioned last week. we’re still working out the best way to present this info to you and have been adding some tweaks based on some suggestions, so if you’d like things laid out in a different way or if we’re missing some stats you’d like to see, let us know in the comments or shoot us a DM on Twitter and we’ll see what we can come up with.