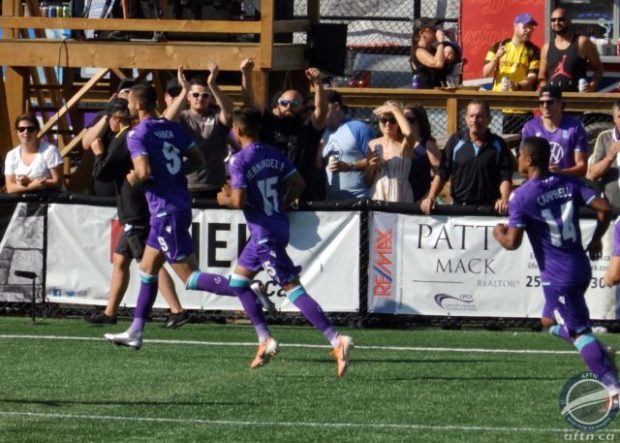 Valour FC head coach Rob Gale had no doubt at all what cost him the three points at Pacific FC on Saturday afternoon – “the referees”.

Gale was left livid after watching Pacific battle back from being a goal down to claim all three points in a match that marked the “grand re-opening” of Westhills Stadium in front of 4,391 fans, following the completion of the first phase of the building work at the ground.

But it was the other battles on the pitch that left Gale seething, compounding his frustration as his side dominated the game and threw away a lead, as the tackles flew in, tensions rose, and the match ended with two coaches and Pacific’s Matthew Baldisimo sent off.

“Two good football teams but I thought we were the better football team today,” Gale told reporters after the match. “We really controlled the tempo of the game and the possession. I thought they went a bit negative with trying to break up play and the consistent fouling today. Then when we went ahead I thought there was only one result to be honest with you.

“We hit the post, we the bar, had a breakaway. I think they didn’t have a shot on target at home the first game with all the pomp and circumstance. We limited them to shots from distance, then the big man came on obviously and we know it’s going to be difficult. We didn’t defend that, and then right after the goal, but I feel like we’ve had it taken away from us today, I’ve got to say.”

The big man in question was Pacific striker Marcus Haber, who is still easing himself back into the fold after recovering from a right knee injury that saw him miss seven weeks. Haber made his presence felt immediately, heading home a 61st minute equaliser with his first touch of the game, seconds after coming on, to negate Michael Petrasso’s opener for the visitors a mere two minutes earlier. 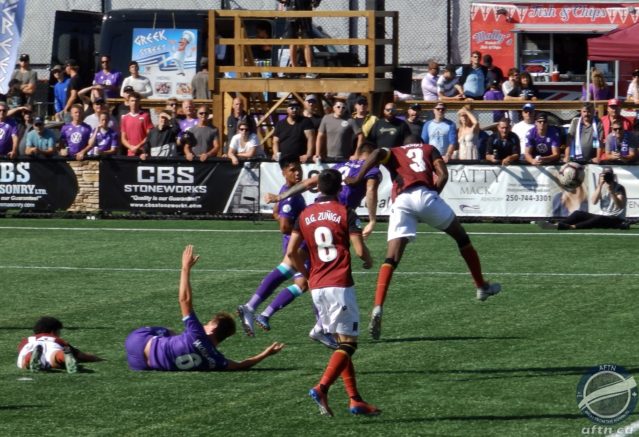 How Valour let themselves be on level terms by this point will haunt them this weekend after the visitors dominated a home side that seemed struggling to get going.

The main talking point from a relatively quiet first half was the non-penalty call on Valour’s Michele Paolucci in the Pacific box. Replays seemed to show keeper Mark Village bringing down the striker, but the referee was having none of it, also waving away a Pacific penalty appeal soon after when Zach Verhoven was bundled over in the box.

“You’ve seen it,” Gale said disbelievingly. “Everyone that’s spoke to me, the opposition coach, he’s just said the exact same thing to me. He’s apologised for the referee and he’s apologised because he knows it’s a penalty. It might be a call for them later on if he gives the first one. He’s probably going to give the second one.

“Then the goal and the penalty himself. I mean if he walks down the street that’s assault. What do you say? I have to take one on the chin. It’s killed my momentum of the team, with a very good away performance. To dominate, as we have done, with the ball and the chances and everything else. I’m furious really. We’ve literally had that game taken from us today.”

Valour’s aggravation at proceedings clearly fired them up for the second half and they took the game to Pacific, almost taking the lead when Marco Bustos long range strike cannoned off the left post.

They got the reward their play deserved though a minute before the hour mark. Bustos broke forward and played the ball out to Raphael Garcia, who sent in a dangerous ball in front of goal for Petrasso to fire home his fourth goal in four matches. 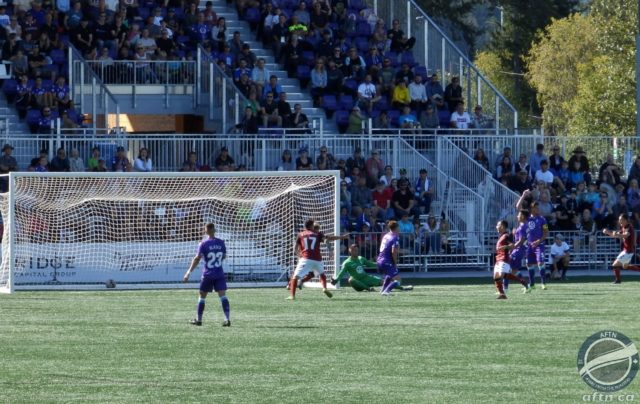 Haber soon levelled things up again, heading home a Victor Blasco free kick, and when Petrasso’s shot crashed off the bar and Paolucci’s rebound was brilliantly tipped over by Village, Valour must have felt their and then that this wasn’t going to be their day.

And that was confirmed with 10 minutes remaining when Haber was brought down just inside the box, earning Pacific a penalty.

Valour were incensed that a free kick wasn’t called in the build up to the goal as Haber challenged for the ball, possibly with the aid of an elbow, leaving Adam Mitter in a heap on the ground.

After a lengthy delay for treatment and to calm rising tensions between the teams, Haber stepped up to fire home his second of the game and what proved to be the match winning goal. 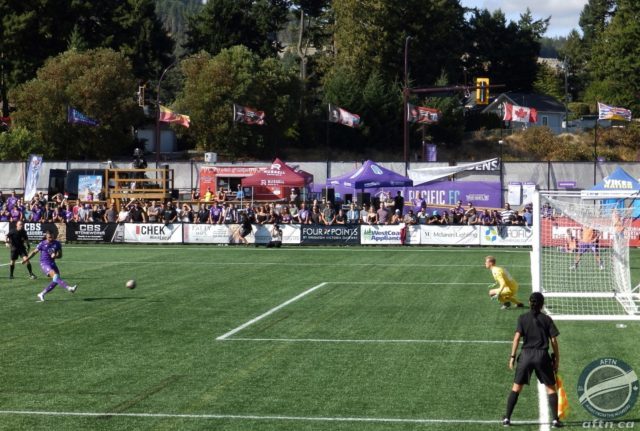 It was a fightback, and a victory that delighted Pacific head coach Michael Silberbauer, as his side finally start to show what they have the makings of this season now that their crippling injury issues seem to have finally subsided.

“Even though they scored first, we showed high morale,” Silberbauer said postgame. “That’s what I’m focusing on. I’m focusing on what we can do to win games and the players showed up with an attitude and were ready for the fight and ready to put in a good performance.”

But the action was to be far from over with Haber’s winner as tackles continued to fly in, in a match that saw 27 fouls conceded, 18 by Pacific and 9 by Valour.

Something had to give and in the end it was Pacific midfielder Matthew Baldisimo who was booked for a challenge on Louis Beland-Goyette in the final minute, only to be sent off seconds later for his reaction as he yelled at the Valour player on the ground. A bizarre sending off considering some of what had gone before from both sides, and it raised the ire of Pacific assistant James Merriman who was dismissed from the sideline for his complaints.

For Gale, that was just the icing on a frustrating cake.

“They broke up the play and tried to get about us,” Gale said. “The foul count was unreal and they’re very lucky to have men on the field. Players leaving their feet on tackles. The 48 just tries to foul people, the Gonzalez boy. That’s his game and he stayed on the field and Baldisimo, one of the nicest lads you’ll ever meet, he gets sent off. And two coaches get sent off. I mean what do you do, what do you do?”

What Gale has to do now is regroup quickly as his team head home to face HFX Wanderers on Wednesday evening.

The victory saw Pacific FC leapfrog Valour into 4th place in the standings after a resurgence that has seen them record three wins and a draw in their last four matches. That form will certainly be tested midweek when they travel west to take on Cavalry FC at Spruce Meadows. Another feisty one seems likely.