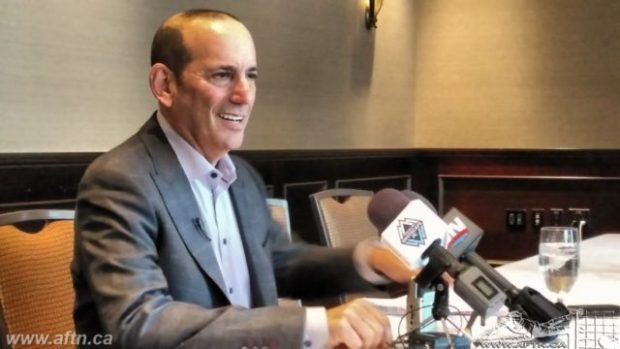 Refereeing. A topic sure to raise the ire of even the most mild mannered fan around the world.

The man in the middle (AKA the bastard in the black/blue/red/green, whatever colour really) is a thankless job. Just why anyone actually wants to be a referee continues to baffle me. It’s like parking meter attendants. You’ll never get any thanks, can seemingly do no right, and just leave yourself wide open to non-stop abuse.

They’re not meant to be the centre of attention (someone really should tell Mark Clattenburg that), yet often are, especially it feels in Major League Soccer.

Are MLS referees worse than any other referees you’ll find in the world? I’m sure we could all reel off numerous examples that make that case, but then so will fans in England, Italy, South Africa, Argentina, etc etc.

Rightly or wrongly, refereeing and PRO (the Professional Referees Organisation) just feels like a whole different animal in MLS. One that is clearly struggling and would perhaps be served best by taking out the back and being put out of its, and our, misery.

There’s the inconsistencies from referee to referee and match to match. The whole ‘what will DisCo do’ vibe hanging over every contentious decision. And worst of all to my eyes, it feels like there is a very concerted effort to remove tackling from the game.

Football is a physical sport. Tackling is an important part of the game and there’s a danger that things are going to change beyond all recognition of the crunching challenges I watched and loved as a lad.

Watching CONCACAF Champions League games has been a refreshing change. The game flows and referees let things go. The same was true of the matches on the ‘Caps preseason trip to Wales with the Welsh FA refs.

So are MLS refs and PRO interpreting the laws of the game differently from elsewhere, or are these other refs the ones doing that? Is there in fact an edict from the MLS bigwigs to sanitise the league? Because it certainly feels like they’re trying to do that.

“No, it’s not the league,” MLS commissioner Don Garber told AFTN when we put that question to him at a media roundtable chat on Monday. “PRO, which you’re probably familiar with, is an entity that is jointly managed by the CSA and the US Soccer Federation.

“It’s based in the MLS league office and has the same kind of structure that the PGMOL has with the Premier League, but at no time has a MLS executive ever sat down with Peter Walton and said ‘this is how we want you to officiate a game’. They are an independent body. We provide the vast majority of the funding, so that we can have more full time professional referees and make sure that they’re getting properly trained, they’re getting properly assessed, that they have the right technology.

“But there is no, and I don’t think there is in any league, some edict that comes down from the league to tell them how they should be refereeing the games, so the answer to that is no.”

So PRO and their referees are responsible for their own awfulness then. Good to know?

But with all the hue and cry from fans, pundits, and even players, around MLS refereeing these past couple of season, surely Garber and the league can’t be happy with the current state of officiating here? Nothing could be further from the truth.

“I think it’s a lot better than most people give us credit for,” Garber said of refereeing in MLS. “When I look at Premier League games, and I watch them like you guys do, I see the same level of challenges with the game as exist in our league or exist in Liga MX. It’s the nature of the sport. I think we’re unfairly criticised for the standard of refereeing in our league and I’m not quite sure why that is.

“When we look at how our referees are assessed and the level of what we call key match indicators, the decisions that they’ve been making over the last couple of years have been better and better and yet our fans think that refereeing has got worse and worse. But then I’ll travel over to England and I’ll travel over to Spain and I’ll hear the same thing.”

Which is true. Fans in every country in the world think that the standard of refereeing in their league is dreadful and some of the worst around. They may not have watched some MLS matches however!

“I think it’s the nature of the sport,” Garber continued. “Globally, it’s why FIFA and IFAB and many of the top leagues have gotten behind video assisting and the whole VAR program. We’re going to provide technology and hopefully give the referee the tools to hopefully take away some of the decisions that they do make that are incorrect, because that happens in all leagues.

“I get frustrated with the level of criticism, but hopefully VAR will address some of that. I’m not sure that it will.”

The big announcement this week was that former top flight English referee Howard Webb is going to be the man to oversee the implementation of VAR in MLS for PRO. 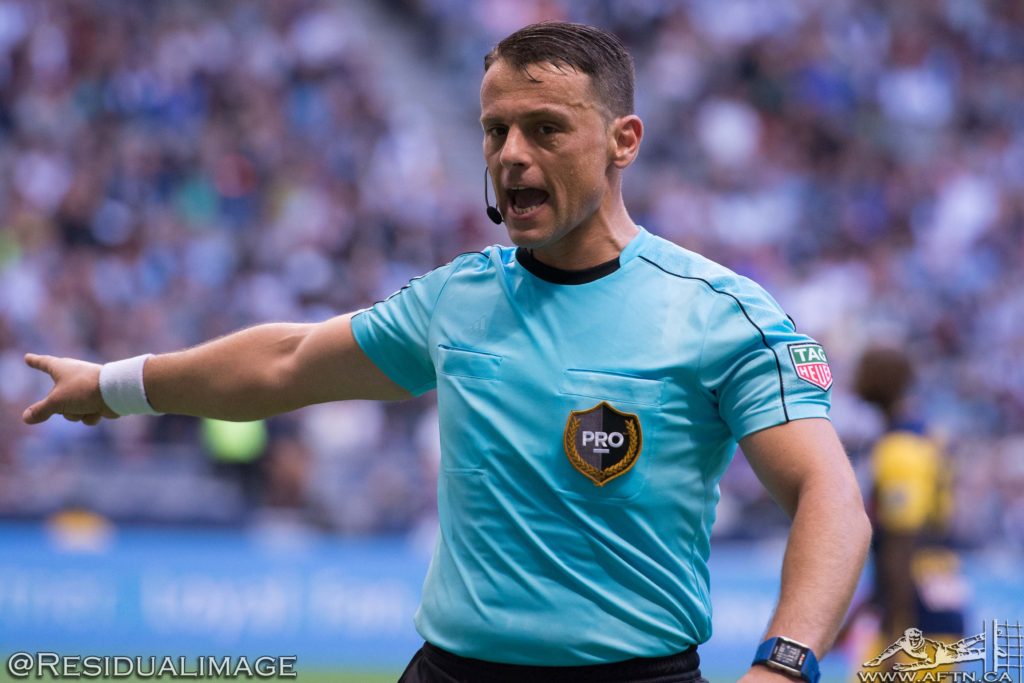 It’s being tested out this week in the preseason tournament in Portland as many of you will know, and Thursday night saw the first use of it when referee Soren Stoica (pictured above) used it to send off Portland’s Diego Chara for an elbow on RSL’s Yura Movsisyan.

But the whole decision took far too long from start to finish. It was two minutes and 49 seconds from the incident taking place to Stoica, known to Whitecaps fans as the man who sent off Carl Robinson last season, showing the red card to Chara.

Hopefully teething problems that will be streamlined, but most importantly, it was the correct decision in the end and one that had been previously missed.

As a purist, traditionalist, luddite (call it what you will), I was always against such tinkering in the game, but in recent years I’ve mellowed, a lot, after seeing the implementation of video refereeing in other sports and some dreadful real refereeing decisions. Delays of the game will hopefully be minimal, as with goalline technology and VAR is certainly there to assist the referee, not undermine him.

The same can’t exactly be said of the infamous MLS Disciplinary Committee. Oh how all us punks hate DisCo.

Referees have to feel undermined that a panel meets the following week to pick fault in how they’ve officiated a match, not to mention Simon Borg handing out postgame red cards like candy, as he finds missed calls left, right, and centre.

Then there’s the consistency aspect of DisCo and the perception from some that certain teams, certain players, get hit more than others *cough* Whitecaps *cough*, while bigger name players often miss out on suspensions.

“That could not be further from the truth,” Garber categorically stated. “As the man who ultimately has to weigh in on the appeals that take place, the number of appeals by players have gone down dramatically. I think that’s an example that the process is working.

“In the early days of the disciplinary committee process, I had an appeal almost every week. I think I had three last year and one or two of them I think we overturned the decision of the discipline committee.”

It should be noted that clubs are limited in how many appeals they can make in a year now and will be worried they waste an appeal on something that isn’t overturned and then run out of appeals when it comes to a glaringly obvious one that should be.

So what about that consistency?

“We would lose all credibility if the Disciplinary Committee was making decisions that were either protecting or unduly putting scrutiny on any particular player,” Garber continued. “It would be interesting to put them all up on a screen and take a look at them, because I think if they were you would see that they are very consistent in their view.

“Remember, that’s got players on it, it’s got a union representative on it, it’s got a number of league technical people on it, and they have to rule unanimously in order to enact any discipline, so five guys have to all come together and see the play the same way, which might be different from what the official saw.”

The committee works closely with the Players’ Union in setting guidelines as to what should and shouldn’t be deemed acceptable each season. Just how much of that trickles down to their membership is debatable after some of the outrage at the start of last season over certain decisions.

So no matter our thoughts on DisCo and the overkill and undermining of it, it’s not going away any time soon. In fact, other leagues around the world are actually monitoring the success, or otherwise, of it.

“Believe it or not, other leagues have actually looked at our discipline committee and have thought about putting that process in place,” Garber revealed. “It think it is a way to protect your players.”

Of course, the fact that these leagues have looked and so far no implemented raises other questions.

There’s also the whole mysteriousness of the committee. No-one actually knows who is on it, so it appears shady, but that’s not going to change any time soon.

“The reason is to protect them,” Garber said. “For all the reasons that you can imagine. I think it is really positive that there is a lot of social energy around this stuff, far more so than ever before. There is more interest in transparency, there’s more hot stove stuff going on, both with the media and the fans. That moves the league in a certain direction.

“But as it relates to ensuring that those five people can do their job and do it without having any undue pressure, I think that’s important. They are, and I don’t think again they get enough credit for it, they review every single game, they review every single play and they’ve got to go through that to ensure that they’re getting it right in an unanimous way. It’s a lot of work. Nobody’s paid for it.”

With the new MLS season just weeks away, we can all hope that we’ll be talking about great goals, shock results, and standout performances, rather than the quality of refereeing ruining matches yet again. We won’t be holding our breath.