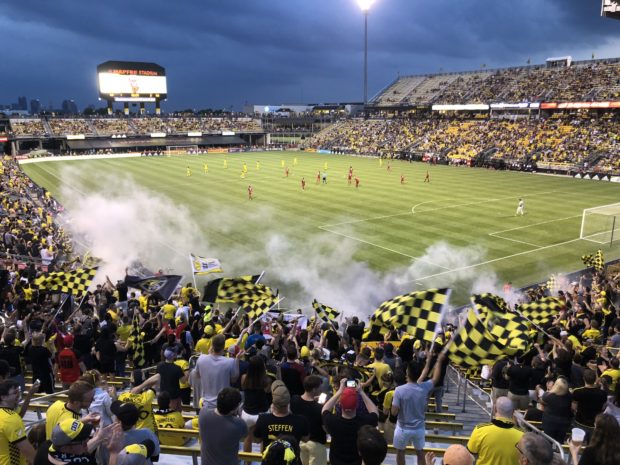 MAPFRE Stadium lies to the north of downtown Columbus, in the middle of a parking lot that doubles as the Ohio State Fairground. To get there from downtown you drive through uptown, through the artistic neighbourhood of the Short North, and then through the projects and working class neighbourhood of Weinland Park. Before hitting the river of traffic on I-75, you drive into the fairgrounds, a sprawling empty space of parking stalls and RV camping spots, with MAPFRE stadium rising at one end.

To get there you join the snaky line of cars along North Fourth, driving past bars and small brick row houses. There were once plans for a streetcar line up this way to serve the north end, reviving the system that existed here in the early 20th century. No Flying Scotsman, it would nevertheless have knitted together the University district and the stadium, perhaps bringing in the fans that the Crew always wanted: the college students whose high voltage support powers the love of Ohio State athletics.

But much about the Crew seems to be a missed opportunity. My friend Scott, the first guy I ever knew that loved MLS back when I met him more than a decade ago, even said the Crew’s colours, designed to attract fans from as far away as Pittsburgh, never really caught on broadly in a town that is red and grey. He laments the ability of the Crew to really market the club locally beyond the core supporters and fans who have always loved the team.

The stadium, which was the first soccer specific ground in MLS, stands as a gentle giant in the annals of American soccer history. It is considered a home ground for the US National Team, who have secured three dos a cero victories over their Mexico in this ground since 2003. Banners on the ground floor level below the stands celebrate these victories as well as the 2008 MLS Cup Championship and the Supporters Shield wins.

Notably the only chance that Columbus had to win a major trophy in this ground was the 2015 MLS Cup, which was lost to Portland in heartbreaking fashion on a goalkeeping error and a shocking lineman’s decision. This city knows what it feels like to have it’s heart stomped to a pulp. Sentiment matters. MAPFRE might be a dinosaur, but it’s no Barney.

The seating is mostly bleachers that surround what might be the most beautiful looking pitch in North America. For years, they have never even approached being full. This is a sore point with Columbus fans who feel that the team has been deliberately undersold in a bid to devalue it so that it can be moved. The current owner, Anthony Precourt, is treated as a super villain amongst supporters. Anger visibly pulses through the supporters section when his name is mentioned. In wanting to move the team to Austin, Precourt has dealt a blow that has landed squarely on the chin of the supporters groups. They are reeling, but not out. 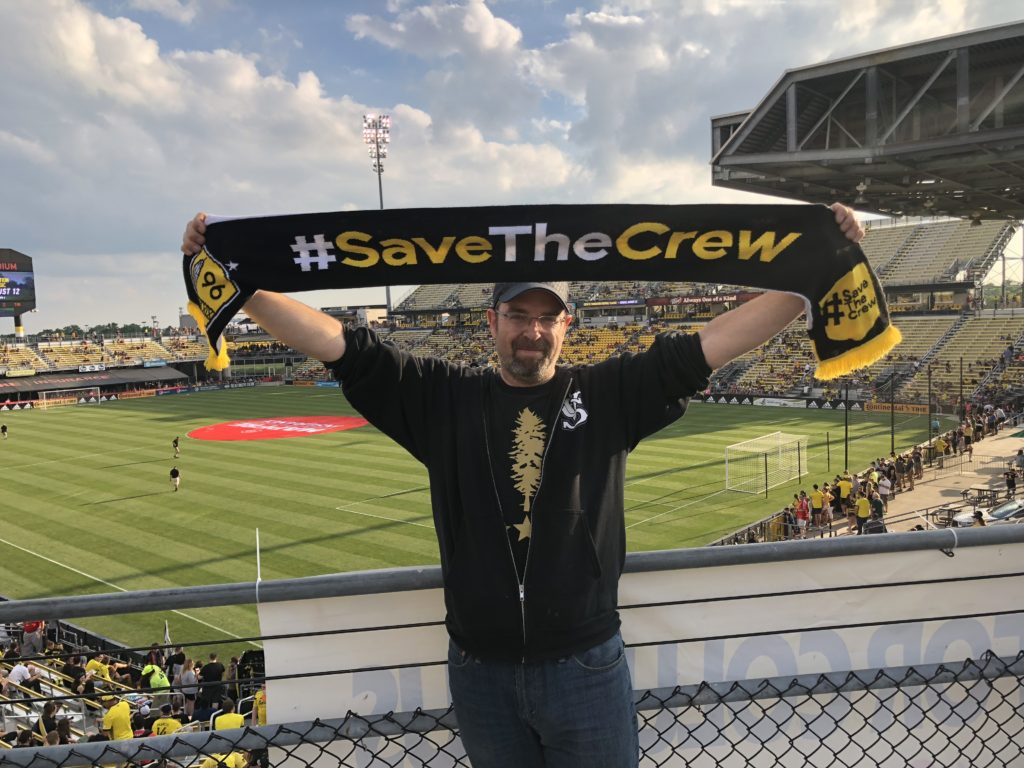 Scott and I drifted around the wide open concourse to the Nordecke, where the supporters gather around two big drums and two big capo stands. All season, they have been singing and chanting in front of banners that directly target Precourt and his company for the decision to move the team south.

The front office lies contained within a one way glass bunker sinisterly sitting kitty corner across the field. The dark wizards of soccer franchise capitalism stare out at the Nordecke for the whole match, contrasting their coldly rational approach with the reality that they are ripping the heart out of a city that has emotionally and financially supported the team for 28 years.

The Nordecke are impressive in their energy. A few hundred are full 90 supporters, running constantly through a small repertoire of English and Spanish language chants. In-section capos hold up large signs with the chant titles on them to coordinate folks behind them. With no roof on the stadium, the projection isn’t what it can be, but it’s still palpable and constant. There is joy and hope and support for the players offered in the chants, and white-hot rage directed across the pitch for the occasional organic songs targeted at Precourt.

Tonight’s opponents were the snakebitten Toronto FC, and the match was the second and final leg of the Trillium Cup, an MLS manufactured rivalry that has almost no relevance to the supporters of both clubs who are sometimes hard pressed to find the other city on a map. During TFC’s first year in the league, there was fan trouble in the stands between the visiting TFC supporters and locals, but this spite has waned over the years, especially since Montreal entered the league.

On this night however, it would later be revealed that some visiting TFC bully boys descended on the Crew family section with flares and abuse, leaving some Crew supporters with burns and injuries. None of this was visible from the Nordecke, but I daresay tempting Crew supporters to give outlet to their emotions these days is not a wise thing to do, especially if you are travelling in a country that doesn’t care about your health insurance plan.

Columbus won the first match of the derby, defeating Toronto 2-0 at BMO Field in March, and so a win or a draw would secure the trophy for the home side. It would take a full 180 minutes over both matches to determine the Trillium Cup winner on this night.

It’s hard times in American soccer at the moment. The dismal failure of the USA to qualify for the World Cup has been laid solely at the feet of the one time mighty Michael Bradley. With every touch of the ball, the spiritual home of US soccer booed their one time captain with derision and passion. It was clearly getting to him as well, for even as the visitors took a 3-0 lead in the match, Bradley had a torrid game. He was the worst player on the pitch, and Columbus kept going right through him to draw fouls and create chances from set pieces.

When Federico Higuain stepped to the spot in the 90th minute to take a penalty which would draw the Crew level, the stadium fell into complete silence. When the iceman hit the back of the net the stands exploded with roars, flags, and smoke grenades. A few minutes later, the match was over and the Crew lifted what may be their last piece of silverware in front of the Nordecke. 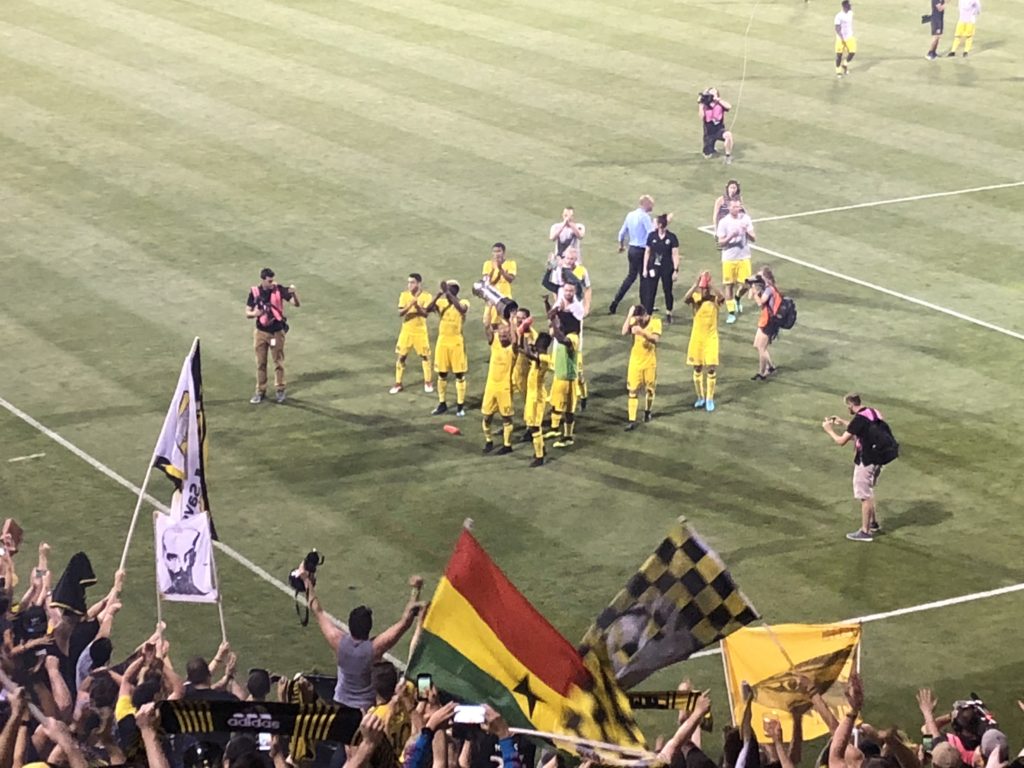 Everything about the Crew this season is bitter sweet underscored by a fierce determination to not let the Precourt and his sidekick Garber lift the team out of Ohio.

With Cincinnati finally coming into the league the chance for a true derby with a hated rival Ohio city would be a massive boost to soccer in the city. If the #SaveTheCrew folks can win their two front war – finding a local buyer while meddling in local politics in Austin – they may yet see a Buckeye Derby contested. That would be a huge boost to soccer in Columbus. It is a city that loves its team with an intensity that is deep, even though right now, the cynicism and neglect of the team’s current owners have narrowed the appeal.

The chance to save the Crew may be small but at the end of the day, it will come to doubling down with their last shot to secure the outcome they want. Hope is in short supply, but passion is everywhere. If the team does eventually leave the state, so much will be lost and one of the grand teams and most important grounds of American soccer will be lost.

Everything will be torn down, perhaps with only a plaque to honour the famous USMNT results and the league trophies that were once lifted in a stadium of heartbreak.

I hope #SaveTheCrew comes to something, for by the end of this year the direction in US soccer will be cast and there will be no return from the choice. 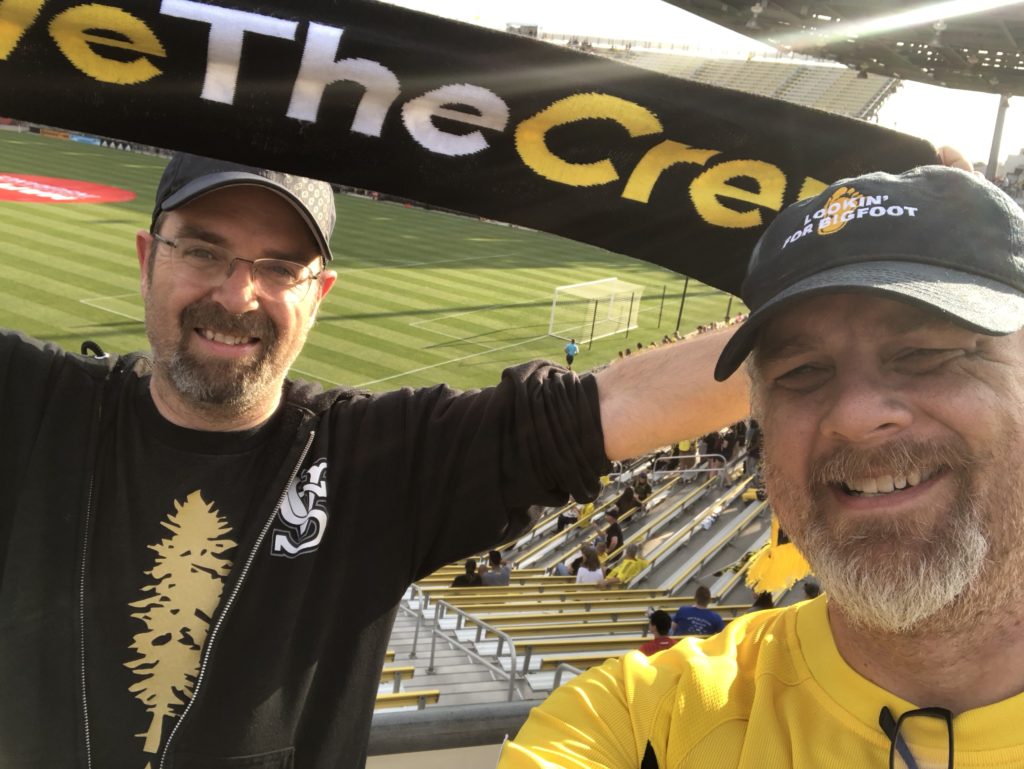