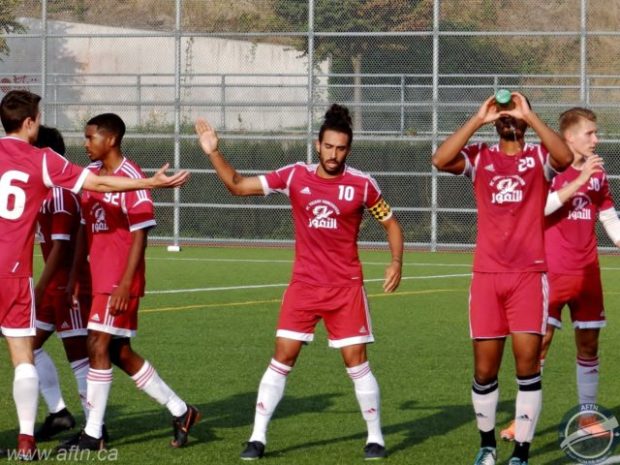 With one weekend of Vancouver Metro Soccer League (VMSL) fixtures remaining until the Christmas break, the top four continue to have very little to choose between them in the race for the 2019/20 Premier Division title.

Croatia, Rino’s, and West Van were the big winners in Week 14, while BCT Rovers Hurricanes were the one team to slip up this past weekend, dropping what could prove to be two very important points in the championship race.

It was also a week for a number of big individual efforts, with a couple of hat-tricks and doubles in there.

Leaders, and defending champions, Croatia SC faced what should have been a tough trip to Surrey to take on Provincial and National champions CCB LFC United on Friday night. In the end it was a far more comfortable night than expected, as CCB suffered two player injuries in warm ups and had to play the entire game with ten men due to their other injuries already making for a short bench.

Croatia ran out 4-0 winners thanks to braces from Emile Saimovici and Mark Malamura, but CCB more than held their own in the first half before tiring.

Saimovici struck the opener in the 18th minute, doubling Croatia’s lead six minutes into the second half. Malamura then hit a double of his own in the 67th and 83rd minutes to round off the four goal victory and keep their place at the top of the table.

Starting line up in a 4-0 loss to Croatia this evening. Tough game but the fellas that played put in a great effort. #vmsl #unitedwestand #welcometothedarkside #darkness #goodfellas #winning #soldyoursoul #BB5 #youngking #dedicatedtoBrandon #westillpostwhenwelose

Rino’s Tigers continue to breathe right down their necks in second spot and were in seventh heaven at Burnaby Lake on Sunday evening as they trounced Burnaby Selects White Eagles 7-0.

VMSL Golden Boot leader Farivar Torabi took his tally for the season to 18 with another fantastic performance for the Tigers, bagging a first half hat-trick and rattling the woodwork twice on top of that. Torabi struck in the 23rd, 26th, and 41st minutes to send Rino’s into the half with a 3-0 lead.

A three goal, three minute burst put the game beyond doubt around the hour mark. Kristopher Luke made it four in the 59th minute and Connor MacMillan saw the Tigers go nap a minute later. Mehrab Rahmati added some six appeal in the 62nd, before Daniel Johnson had Rino’s drinking 7-up, to round off the scoring with 20 minutes remaining.

Rino’s win keeps then in second place, two points behind leaders Croatia and one ahead of West Van, who were the other big winners last weekend.

The Amblesiders saw off bottom side ICSF Columbus 6-1 at Burnaby Lake on Friday night, with all but one of the goals coming in the first half.

West Van came out all guns blazing, hitting five unanswered goals. Eoin McCormack started the rout off nine minutes in, before Paul Kelly doubled West Van’s lead on the 20 minute mark. Keith Jackson made it three on the half hour mark, then Kelly made it four two minutes later with his second of the night. Jackson got his brace in the 35th minute, but West Van were then reduced to ten men five minutes before half time, when Michael Winter was sent off for the denial of a goalscoring opportunity.

Columbus capitalized immediately from the resulting penalty, with Adriano Negri burying the spot kick, but there was to be no dramatic comeback and Jackson completed his hat-trick ten minutes into the second half for the 6-1 final.

BCT Rovers Hurricanes were the only one of the top four teams to drop points last weekend after a battle in a 2-2 draw with Club Inter EDC Burnaby at Burnaby Lake on Friday night.

Nick Soolsma had the Hurricanes in front midway through the first half and that was how it stayed until the 54th minute when Colin Streckmann fired Inter back level from the spot.

Jehmrode Kahlon put the Hurricanes back ahead just past the hour mark, but Inter tied things up once more through Graham Smith with ten minutes remaining.

Those two points dropped sees the Hurricanes fall to fourth, four points back of leaders Croatia.

At the other end of the table Guildford FC FASA continue to make it interesting, picking up another point in a 1-1 draw at NVFC Norvan on Saturday afternoon.

Ramsey Alfantazi put FASA ahead nine minutes in, but they were reduced down to ten men just past the half hour mark when Martin Ruscade was sent off for the denying of a goalscoring opportunity.

FASA couldn’t hold out for all three in the second, succumbing to Bjorn Borren’s 65th minute equalizer, but they did secure a point in the end, moving them to within two points of CCB in the relegation battle.

The other match last weekend saw Coquitlam Metro Ford Wolves close the gap on SFC Pegasus in the Provincial Cup positioning battle with a 3-1 win on Friday night. A Carlo Basso brace and one from Kyle Jones got the job done for Metro Ford, with Chetan Jhooty on target for the Horsemen.

Unfortunately we don’t have any video action to bring you this week, but all of those results leave the VMSL Premier Division standings looking as follows after Week 14. 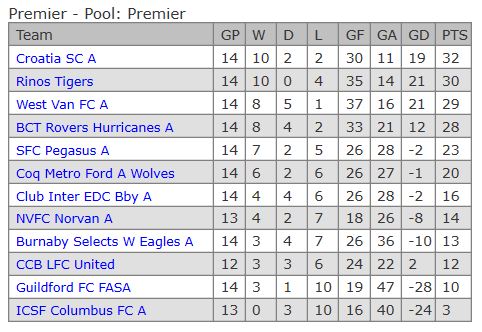 You can find all the fixtures, results, and standings across all the VMSL divisions at VMSLsoccer.com, and don’t forget to head over to the TakeThePiss forums for all your football banter. It’s your last chance to get out to see some VMSL action this decade!