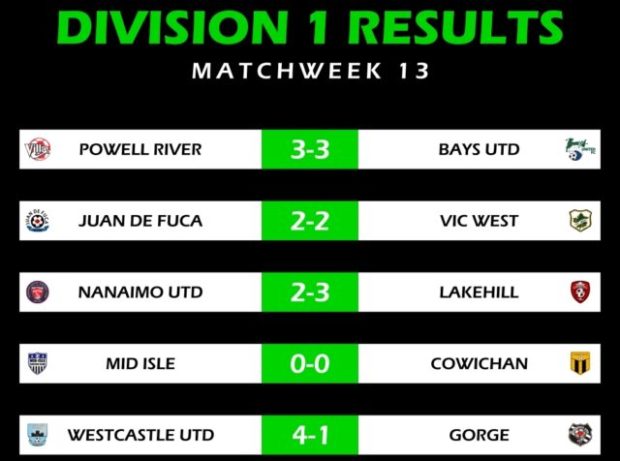 Week 13 of Vancouver Island Soccer League (VISL) Division 1 action was all compacted into one day, and Saturday was certainly a busy one in the top flight of the league.

It had a little bit of everything – more draws, an “upset” from a draw, a couple of games where the unexpected happened, and almost huge upsets took place. Needless to say, it was an exciting weekend.

Here is the quick snapshot of results in Week 13.

The opener was in Powell River – one of the toughest places to play just because of the distance and all the challenges of going up the night before and trying to keep teams in control.

The game sounded like a beauty for the most part as home town Villa and Bays tied 3-3. Villa went 3-0 up, before Bays responded by scoring three in the last 17 minutes. Jake Kenmuir grabbed a brace and Kye Taylor got the other for the home side, with Bays’ goals coming from Patrick Nelson and a double by Chris Peereboom.

The second game of the day had Juan De Fuca All Flows and Vic West playing out a 2-2 draw. John Hurrell and Ori Fisher were on target for JDF, with Stuart Heath getting both of Vic West’s goals.

Nanaimo hosted leaders Lakehill and had their hearts pumping as it turned into a 3-2 win for the table toppers. The game was tied at 2-2 late into the second half, before Lakehill added the game winner at 76th minute Andres Algarin and Colin Jacques were on target for Nanaimo, with Bjorn Malahoff, Evan Wills, and Nicholas Pineda-Graham securing the three points for Lakehill.

The next game up in Ladysmith provided a surprise as Mid Isle and defending champs Cowichan FC played to a scoreless 0-0 draw. This gets Mid Isle their first point of the year. In the Mid Isle goal, earning the shutout was Evan Carr, with Darian Achurch doing the same for Cowichan.

The final game of the night was the Game Of The Week and it was between two undefeated teams.

Westcastle did not disappoint, keeping their unbeaten record intact as they defeated Gorge FC 4-1. 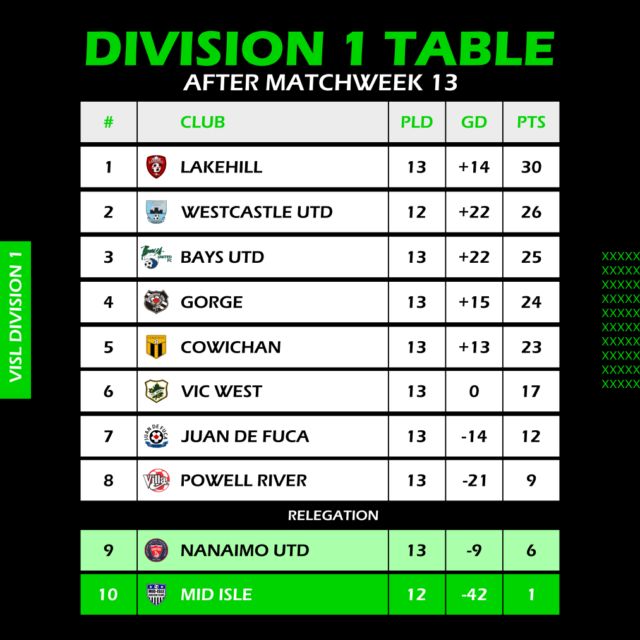 Lakehill stay atop the division after 13 weeks, a familiar spot from last year around this time. Westcastle are in the background close-by in second spot and looking to pounce – and are still undefeated.

Bays, Gorge, and Cowichan are all next up, and all suffered from their results on the weekend.

The bottom five remain the same with Nanaimo and Mid Isle in the relegation zone.

There were plenty of goals over the weekend, leaving Westcastle’s Keenen Colley the new man up top in the race for the Golden Boot, replacing Cowichan’s Blaze Roberts. 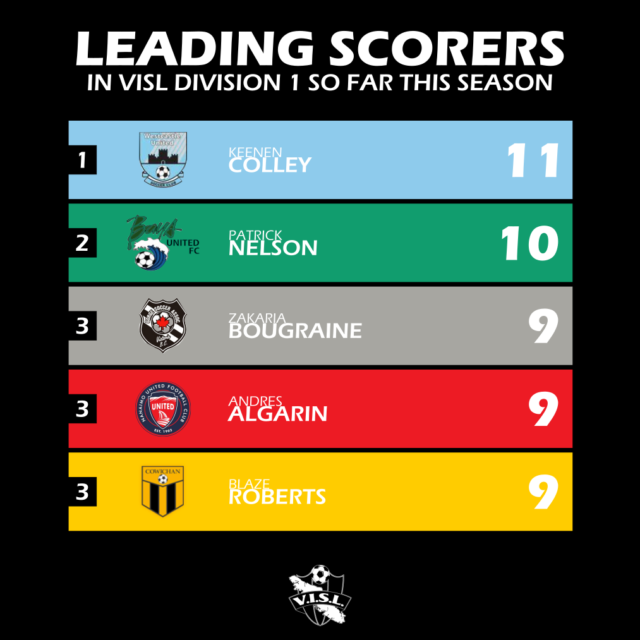 Not to be outdone, there were a couple of goalkeeper shutouts over the weekend, leaving Cowichan’s Darian Achurch co-leading the Clean Sheets leaderboard alongside Westcastle’s Sachdev Grewal. 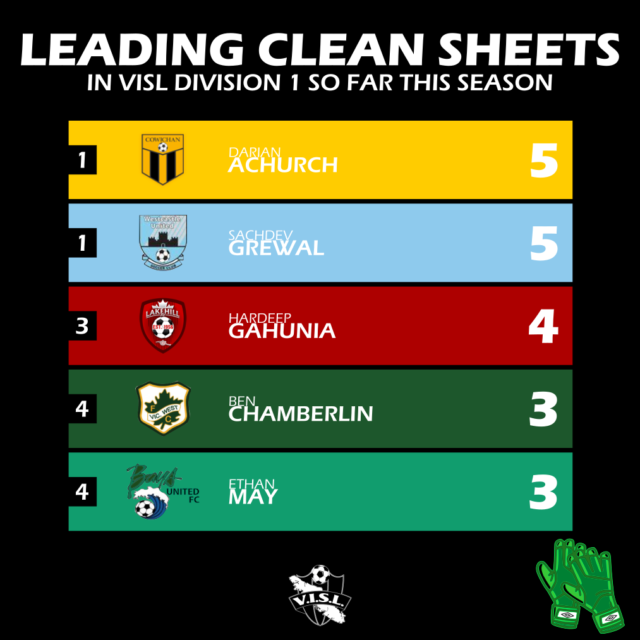 So after another exciting weekend that was not so standard and provided plenty of storylines, I’m sure the coming week will bring more to the table. These will be the VISL’s last matches before the Christmas break, and the last ones of the decade!

Wrapping up 2019 should be exciting as it sets the table with what teams need to do as 2020 gets underway.

The upcoming weekend will confirm some of the questions that have been asked – and where teams can or cannot finish. Magic numbers will become more of a reality with less probability of expecting help from other teams.

Hampton Park will be where the second game of the night takes place as Gorge host Juan de Fuca. Both teams are coming off lackluster weekends, and will want to finish 2019 with a bang. Gorge, just ending their undefeated streak, will need to earn the three points to stay in the top four, while JDF need the points to separate themselves from the relegation zone discussion.

The final game of Friday night will be on UVic Turf field #3 as Bays Utd hosts Westcastle. Bays are coming off a strange game in Powell River, while Westcastle seem to be firing nicely after a big win over previously undefeated Gorge. Both teams will want the three points if they want to be able to catch Lakehill, with the hopes of claiming the Garrison Cup.

Saturday afternoon will be a big test for travelling team Powell River as they face division leaders Lakehill at Braefoot Park. No doubt Powell River remember the thrashing that took place the last time these two teams met. This is a must win for Lakehill to stay on course for their first ever Division 1 Championship.

Saturday, and the year, wraps up with the battle of the two teams in the relegation zone in Ladysmith. This will be a much better game than one might expect as both teams seem to finally be putting some better games together as of late and will be looking for all three points to say the least.

Here’s how the final slate of matches for 2019 line up. 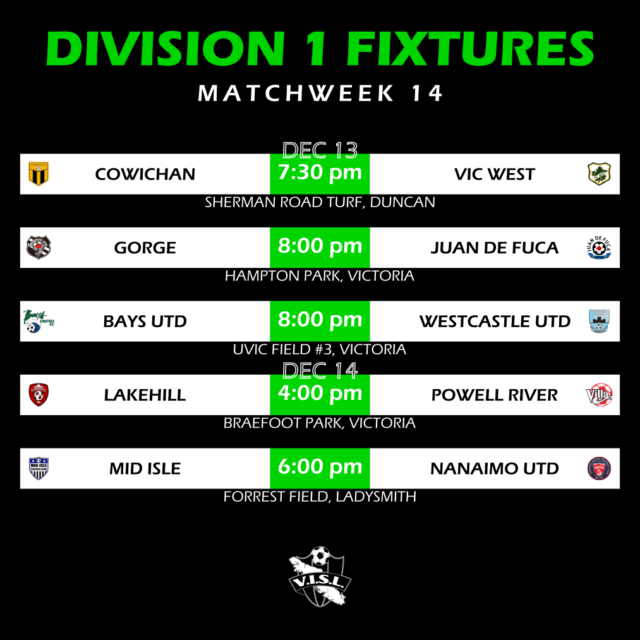 While all weekends are very important here on out, no doubt this will be on the top of everybody’s mind and will play a factor into a pleasant or not so pleasant Christmas holiday. The naughty and nice list will definitely have some definition after the weekend is complete.

Hope to see you at the pitch, supporting community players and grass roots soccer.