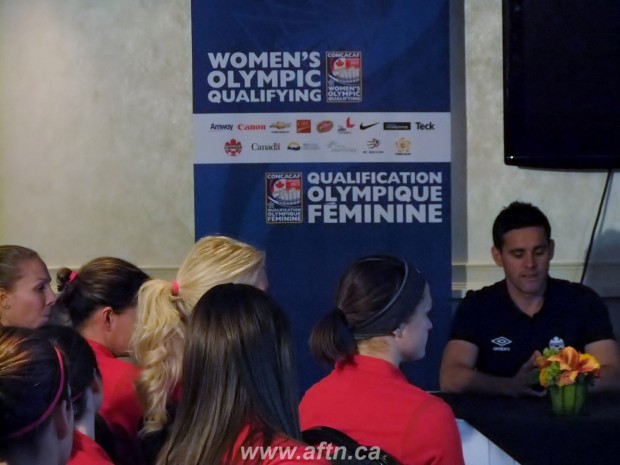 Canada’s Women’s National Team rang the changes in last night’s 2-0 win against Cuba, as expected. There were eight changes to the starting line-up from Thursday’s evening’s group game, and all twenty girls in the squad have now seen action in the tournament.

For Head Coach John Herdman, this is all part of a careful calculation to ensure preserving the quality of his players to reach the ultimate goal of Olympic qualification:

”There’s no way we can finish top, kill the players and then move into game four. It’s just unrealistic.

So I think they’re on track, and I think that’s the exciting thing. We ended up getting some major rest.

We’ve calculated all the minutes of players, so there’s a set amount of time that people should be having on the pitch to keep them optimal for that game, and that’s just based around generic science and recovery principles. It’s a basic thing we’re following that makes sense.”

With the games coming thick and fast, these comments at yesterday’s post-match press conference may give a little indication of the starting eleven for Monday evening’s first place group decider against Costa Rica, and how much gametime certain players will get if the result is going the right way.

Looking at the minutes clocked up by the players so far is interesting.

Centre-half Shannon Woeller is the only one to have played the full ninety minutes in both of the games so far. As a Vancouverite, and former Whitecap, it’s been a great experience for her to play in front of her home-town crowd. She is continuing where she left off at the Pan-Am games last year, where she started all five games as Canada won gold, but she must be the prime candidate for rest on Monday.

Striker Melissa Tancredi is next in the minutes chart. She has started both games, and played the full match against Cuba, to come in at 152 minutes played.

I find it surprising that Christine Sinclair comes in next with 135 minutes and a full match and a half of action. As the key to the whole team, it’s finding the right balance between getting her sharpness right and not risking a devastating injury or tiring her and leaving her flat for the crunch game. It’s hard to imagine she’ll see time in the final group game unless Canada are needing something special from their captain off the bench.

Three other girls come in at over a match worth’s of action so far: Midfielders Sophie Schmidt (98 minutes) Kelly Parker (119 mins) and the Whitecaps’ own fan favourite Kaylyn Kyle (127 mins).

Half the squad have seen a full match as starter, and sit on ninety minutes. It will be interesting to see if Monday’s scoreline allows Herdman to split playing time amongst this group and how much time the lower ranked players like Whitecaps’ Melanie Booth (58 minutes) and Chelsea Stewart (77 minutes) will get. The latter has played in both matches so far as a second-half sub.

It’s always a nice headache for a coach to have, if a rarity, to have many quality choices to pick from. He already has the headache of injuries to Christina Julien (who is rated day to day) and Lauren Sesselmann (who still has swelling on her knee), both of whom would probably have started the semi. Of course, they still both might.

Every player is wanting to play their part in the semi-final and although Herdman will have a clear indication as to who he wants to play, the Costa Rica match is a chance for some of the girls to stand out and stake a claim to a starting spot.

It’s an unenviable job for a coach to try and manage playing time for the maximum productivity and benefit to the team, but Herdman seems to have it all in hand, and is another example of how professional Canada now appear under the new regime.

The proof of just how well this has worked out will come on Friday.

They have three days of rest between the final group game and the semi-final, a day more than their opponents. That isn’t always beneficial, and sometimes allows the odd tweak and strain to appear.

What would really help is a bruising and energy sapping encounter between the US and Mexico in Tuesday’s final Group B encounter.

Whatever that game produces, we at least know that our girls will be physically ready for their opponents in the match that will decide their Olympic fate.