It’s just two weeks until the new Canadian Premier League season kicks off, so no better time to complete our look at the HFX Wanderers squad for the season ahead with a look at their forwards. 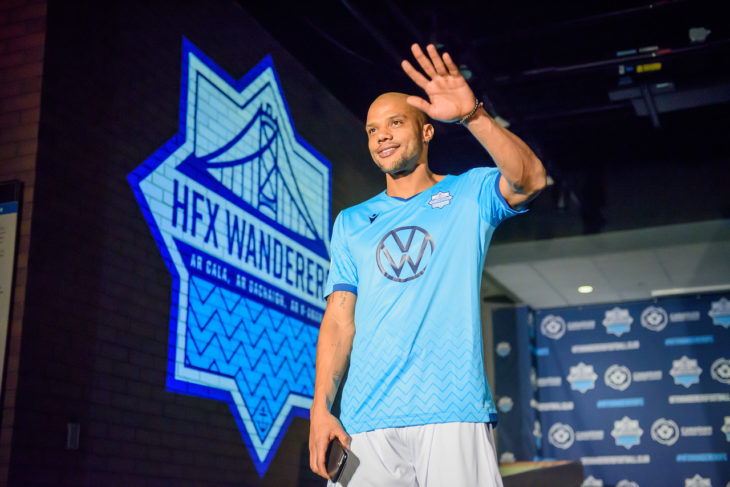 Luis Alberto Perea’s career path so far has all the ingredients of a really good Canadian Premier League specific Jeopardy question. At 32-years-old, the Colombian striker finds himself in his ninth country and at his twentieth club. Quite the feat for a player who only started playing professionally in 2006.

While that might seem like a lot, there are some mitigating factors at play here. Primarily, the structure of South American football, where many of the leagues favour a split season, lends itself to players moving between sides mid-season.

There’s also the fact that during the early years of his career Perea was loaned out an awful lot. Four of his first seven clubs were loan moves. Nothing unusual in South American football.

Despite these eye-opening numbers, Wanderers fans will be less concerned with the journey and more interested in the destination. Perea arrives in Halifax one of the early favourites for the Golden Boot (or whatever name the league decides to give it. The Ontario and Surrounding Provinces Volkswagen Shooter Award is my best guest).

There’s a robustness to him on the pitch. In the 18-yard box he uses his strength to hold off defenders, allowing himself to gain the most crucial of commodities for top-level strikers: an extra inch of space. There’s a pleasing variation in the types of goals he scores, too. He’s excellent in the air, decent with one-on-ones, and has the six-yard box wiliness to earn himself a handful of tap-ins per-season.

His most productive spells came in 2010 and 2018. In 2010, for Club Social Deportivo León de Huánuco of Peru, Perea scored 23 times in 42 games. Halifax having a striker that has scored 20+ goals in a top-tier South American league should lead some to pinch themselves. Particularly those early trailblazers for a team in the city.

His 2018 record may be a more pertinent example of his ability in front of goal, given its recency. For C.D FAS, a top-tier Salvadorian side, Perea scored 14 goals in 18 games, leading his side to the play-offs and winning the Clausura top-scorer award in the process. You can see his goals during that campaign below.

Due to Perea’s playing style, he suits just about any system Wanderers will look to play in the coming season. As a lone striker, he is capable of carrying out two different interpretations of the role: strong enough to be a target man who holds the ball up well and looks to involve pacier wingers, but also box-savvy enough to be more of a poacher whose main job is to get on the end of crosses and little else.

If Stephen Hart decides to go with a two-man strike-partnership, Perea is once again an ideal candidate. The much-loved ‘little and large’ duos of twenty-years ago could be faithfully recreated by Perea and Akeem Garcia or Vincent Lamy. Even, at a push, with Juan Diego Gutierrez or Kodai Iida.

It’s this flexibility that makes Perea an indispensable part of this Wanderers team. At 32, and with a travel schedule that would make a wandering albatross blush, Perea won’t be risked for every game this season. It wouldn’t be a surprise to see him sit out some of the longer away trips as spring turns to summer, simply to keep him as fit as possible as the season reaches the autumn and its league championship game.

A game that HFX Wanderers will be hoping Luis Alberto Perea can fire them to.

It’s utterly baffling that Vincent Lamy didn’t earn a professional contract with Montreal Impact this season. If an academy striker scores 25 goals in 24 games but is still overlooked when it comes to being offered a pro-contract, it begs a question for the football existentialists: what exactly are academies for?

Lamy, 19-years-old and adorned with facial hair so precisely manicured it seems to have been lifted from a PlayStation game’s interpretation of what a bearded man looks like, will join Wanderers with a point to prove.

Lamy grew up in Sherbrooke, Quebec. After spending his early years playing for youth teams in the area, he joined Étoiles de l’est of Laval. It was here that he caught the eye of the national team set-up and was subsequently called up to represent Canada U15 in Costa Rica.

The Quebecois was turning heads in Europe during this time, too. His performances for his club side during a friendly match in Italy led to him signing a contract with Alessandria Calcio 1912, a club in the third-tier of Italian football. What followed was a steep learning curve, and within a year Lamy was back home with Montreal Impact’s academy.

Lamy has an exciting skillset. He likes to play on the shoulder of the opposition defence, which allows him to make intelligent runs into the space between the full-back and centre-back. As is evident in his goal-a-game record last season, his finishing is excellent. There’s a no-nonsense coldness in the way he sticks it away: Get the ball. Score a goal. Scene.

While there are doubts that his physical profile would allow him to play as a lone striker, he looks suited to playing in a front two; the perfect foil for a more robust centre-forward in the mould of Luis Perea or Tomasz Skublak. There’s also every possibility that he could be used as a wide attacker in a front three.

Whether or not Stephen Hart sees Lamy as a first-season starter is unclear. The boss has described him previously as a player who could be around in Halifax for a long time. One for the future. It makes sense given the jewel in Wanderers’ attacking crown, Luis Perea, turns 33 this year.

A season under the Colombian’s stewardship will serve Lamy well. Should he couple these lessons with the raw talent he’s shown since his early teens, he’ll have a long career ahead of him.

In the aftermath of last week’s kit launch, a few keen-eyed fans noticed something interesting on the CPL website. When selecting a name and number to adorn their HFX Wanderers kit, there was an unfamiliar surname listed as an option: Tomasz Skublak.

Skublak, a 21-year-old Canadian striker, joins HFX Wanderers FC after a stellar college career with University of Gelph and University of South Florida. During this time, he earned a place on the NCAA Coaches Division One Third Team and shithoused his way to a rather impressive 16 yellow cards and 1 red.
The Ontario-native’s goalscoring record in college was consistent, if never quite prolific. Over 45 games he scored 22 goals and picked up 12 assists. It’s not quite the goal-a-game madness that Messi and Ronaldo (and Lamy!) have tricked us all into thinking is normal but it’s a solid return rate for the Wanderers new boy.

When you watch Skublak in action two things immediately stand out: first, the finesse with which he finishes one-on-ones. He’s a big, strong lad who becomes almost balletic as he bears down on goal. Nine times out of ten he’ll wait for the ‘keeper to commit himself before dinking an elegant chip over their flailing body. It’s a flick-of-the-paint-brush finish, one that can only be performed by a player who is completely at ease with his talents.

This calmness is at direct odds with Skublak’s other side. The side that caused him to be involved in ‘almost every altercation for USF’ last season. The side that has also seen him pick up an unusually high number of cards for a striker over the past three-years. It might be a case of temperament (‘I hate losing more than I like winning’) or simply bad luck, but as he inches into his 20’s and signs his first professional contract, he’ll be expected to channel his competitiveness into a more positive force in the coming season.

Alongside his college career, Skublak also turned out three times for HFX Wanderers’ Canadian Championship opponents FC Vaughan, scoring 2 goals in 3 games for the Ontario side.

Tomasz Skublak brings good depth to this young Wanderers side. He’s a rough-around-the-edges talent with a point to prove, and in Stephen Hart and Luis Perea, he has the perfect people to learn from.

It was tempting to include Akeem Garcia in our rundown of the midfielders instead of the attackers. His flexibility is such that he could very well play in three, maybe four, positions across the midfield and attack. For balance, he’s been included here.

The first thing I thought while watching a video of Akeem Garcia in action was ‘Romario’. Such a comparison must be placed in its appropriate context, but there’s a passing resemblance, nonetheless.

It’s the way he manipulates his body and the stocky force he seems to generate by having a low center of gravity. Should he contribute even a fraction of Romario’s (self-purported, widely discredited) 1000 career goals, then Wanderer’s would have got themselves a bargain.

Garcia has enjoyed a career that up until now has threatened to take off without ever reaching full speed. After a buzz-worthy youth career which included standout performances for the Trinidad & Tobago U17 and U20 sides, Garcia’s progress was stalled by a knee injury. The severity of this injury isn’t clear, neither is the effect it had on him physically, but it’s undoubtedly one that disrupted his progress.

The smart money is on Garcia being used primarily as a wide attacker this season. On the right on a front-three, if I had to guess. It’s the position he played most frequently for Derek King’s FC Santa Rosa last season and the one he physically looks best suited to. While it’s unclear at this point exactly what kind of league this will be from an on-field perspective, you can probably assume that a 5’5 attacker will be better off out wide, as opposed to centrally.

Despite this, throughout the last session of March’s open training he played as a deep-lying striker. I was surprised by how good he was at receiving the ball with his back to goal during that scrimmage. His first-touch was good, even when under pressure from some rather burly centre-backs. He also scored a really well taken goal; meeting a through ball and bending his finish just inside the ‘keepers left post.

I spoke to Lasana Liburd, a Trinidadian sports journalist, a few months ago about Wanderers’ Trinidadian quartet. On Garcia he said that if he was to find his feet in the CPL “he’ll be the one to sell the most jerseys”. Should this happen, a career that has been threatening to kick-off for the past six-years will be finally ready to do so.

So that’s the Halifax forwards for the season. For details of the goalkeepers, defenders, and midfielders, check out the links below: