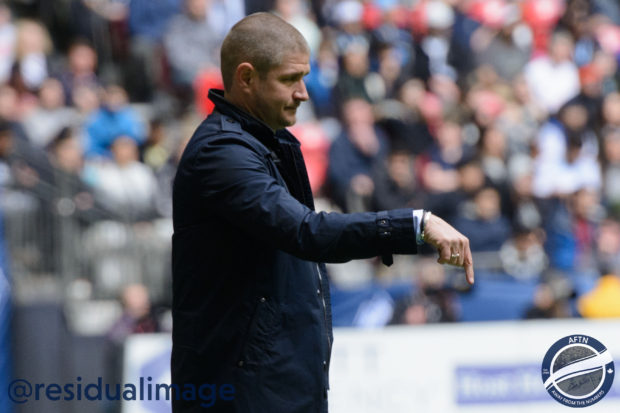 The footballing year is still a toddler, but the Whitecaps season is already akin to that infant that eats handfuls of sand and is having trouble with potty training way past an acceptable age when it is still cute.

The stats make ugly reading: one point from three games, and seven unanswered goals in the last few matches across all competitions. We are in grave trouble in the Champions League semi-finals. We have as many goals as red cards in MLS play. Giles Barnes looks like the one that got away. The list of depressing features go on and on.

It’s actually difficult to pin down the root of the problem, even if you can bring yourself to sit down and think about this team for more than five minutes. Is it the personnel? The formation? The manager? The general direction of the club?

I don’t think our squad is particularly terrible compared to some others. One of the few good things about the parity of MLS is that teams can bounce back quickly, see New England when they made it to the final, and Colorado Rapids last season, etc.

On the flip side, there are some teams that cannot lift off season after season, like Chicago, Chivas (tarps, Rest in Peace), etc. Player-wise, we have a squad with MLS experience, and lots of flair on paper. If you match position for position with a team like Seattle, I don’t think we’re miles behind them, you could even argue that we are better off in the positions of goalkeeper and centre midfield. We do not have an exciting striker (Morris) or a consistent playmaker (Lodeiro), and that’s why they have an MLS Cup and we don’t.

Is it the tactical formation? The 4-2-3-1 is slowly on the decline in popularity, perhaps the philosophy is stagnating in the dressing room. We do play on the counter attack, which can be hit and miss, especially if the team isn’t regularly succeeding in creating those counter attacks.

Take a moment to think of the amount of times a long ball has not only not hit the striker, but not even landed in the same side of the field as the lone target man. It’s also hard to get excited when that man is Erik Hurtado. That’s not an attack on Erik, his work rate is admirable, and not many on the team work as hard as he does. Personally, I would change the formation into a 4-4-2.

Ok, so is the problem Robbo? Let me put a stop to that right now. Getting rid of Carl Robinson is not the answer. I am not preaching stability for stability’s sake, but because he is a quality manager who is still learning the game. I ask you, when we were listening to his first press conference, did the team have an identity? Did the organization seem to have a plan? Did we even know if half the roster would be back next season? No.

Robbo has brought not only these things, but has acquired and gained the trust of a high calibre of player. Now he just needs to get them to perform. The one critique I would put forward is about the mentality he puts his players in before a game. Getting the likes of Kendall Waston and Brek Shea hyped up too much is not a good way to keep 11 players on the field. The ‘Caps red card issue is something he can directly influence.

The “club”, by which most people mean the front office, seems to get a lot of heat. They are an easy target, because the only person we hear from is Bobby Lenarduzzi, and when we find out he is talking about the latest Whitecaps Spring Break Youth Camp instead of announcing that we have acquired Lionel Messi’s Discovery Player Rights, we tend get annoyed. It is a bit more complex than that though.

In general I have no great beef with the front office, or the owners for that matter; they are people who know how to run a business, and deserve the respect for being successful. To those who slam them for lack of spending on players, I would like to point out that there are so many examples of clubs being successful without chucking unreasonable amounts of cash around.

I always like to point to Athletic Bilbao, the Basque team that plays in La Liga. When I say the Basque team, I mean THE Basque team. Athletic have a policy that the club has followed since it’s inception in 1898 that they can not play non-Basque players. Imagine being a fan of a team that gets most of its players from its own academy. Athletic Bilbao have never been relegated in their entire history, one of only three Spanish teams to boast this feat, the other two being the last two winners of the UEFA Champions League.

I believe two things need to happen for this season to get kickstarted: firstly, Robbo needs to make a tactical change. I don’t think flexibility and creativity is a feature that Robbo has demonstrated categorically, but now is a time for the tactician to earn his stripes. Try a 4-4-2 or a 3-5-2. Try something. Go back to basics. Simplify. And for God’s sake get those set pieces fixed.

Secondly, the players need to be held accountable. Red cards are given for lack of discipline, and you can blame these crappy refs all you like, but the best way not to get sent off is to not give the men in yellow an opportunity for reach for the back pocket. I really hope there is a club fine for players who are ill disciplined, because frankly the card count has been appalling in the last year. Get your heads down, and play football.

The ‘Caps have been a poor looking side for coming on two years now. It’s a horrible recent history, and there needs to be changes because things are clearly not working and haven’t for a while. The problems don’t appear to be too deep-rooted, and a formation change and better discipline should go a long way to remedying the Whitecaps woes.

If those don’t work, and soon, or no changes are implemented at all, then we perhaps do need to go digging a little deeper for solutions.