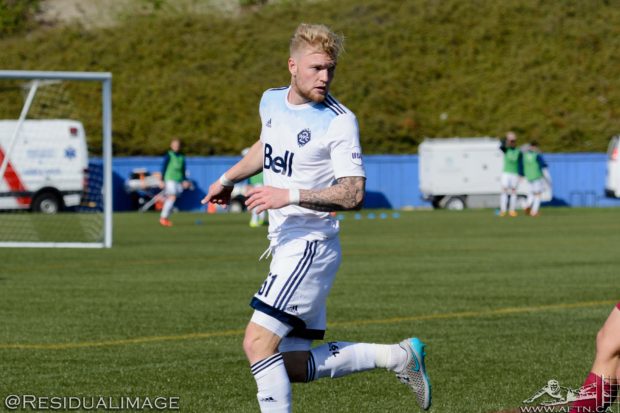 Sem de Wit’s first season in Vancouver was a success.

Named the Whitecaps FC 2 Player of the Year on the back of a team-leading 27 regular season starts and 2416 minutes, the Dutch centre back played every playoff minute of WFC2’s run to the USL Western Conference final.

It was no surprise then when de Wit was one of the first USL players re-signed for the new season, which gets underway this Saturday with a trip to LA Galaxy II.

It’s an important season for de Wit. After training stints and call-ups to the first team in his debut season here, it could be one which could lead to a MLS contract. A good start to his career in Vancouver, but for the Dutchman, he feels he still needs to be better and show more to make the grade.

“Considering I hadn’t played for eight months, I think it was a pretty good year for me,” de Wit told AFTN at WFC2 training this week. “I can do better, I know that. I can do way better. It’s an honour for me that I was Player of the Year.

“I played every game and was vice-captain and I had a good year. I’m happy for that, but now that’s in the past and I have to focus on what’s coming and it starts with Saturday. I just need to do better this year.”

De Wit is still only 21-years-old (his birthday’s a week today) but he’s one of the most experienced players on the Whitecaps roster for the upcoming USL season, with time spent at a number of Dutch Eredivisie and Eerste Divisie clubs before making the move to North America last year feeling he was ”ready for an adventure”.

De Wit’s leadership qualities will be crucial this year for a very young WFC2 side. The last two seasons have seen the ‘Caps bring in a more veteran presence to help the first time pros find their feet. Former TFC player, and five year USL veteran, Tyler Rosenlund was the captain in the ‘Caps debut season. Kyle Greig filled that role in last year’s successful side before earning his MLS contract.

This season, at 25-years-old, Will Seymore and goalkeeper Mark Village are the oldest players on a team that contains six teenagers, but the feeling around the camp is that the experience already gained by this young group over the past two USL seasons will stand them in good stead.

“Well that’s going to help us,” de Wit feels. “We’ve got me, Will, Thomas. Deklan is coming back, Serban, Sean in goal, so we’ve got more than 25 to 30 games under our belt in the USL. We’ll have players from the first team coming down, and Kyle Greig might come down for a few games with us, so that’ll help us with the games that they’re coming down. So that’s an extra for us.”

De Wit’s knowledge of the USL was minimal before heading to Vancouver, but with a full season under his belt he’s now fully aware of what to expect, in every aspect, and has been impressed by the level of play he saw in the league last year.

“It’s better than I thought, to be honest,” de Wit admitted. “Last year I didn’t know what to expect. I had no idea. It’s a good competition. There’s challenges everywhere. The fact that you play against big strikers, fast, teams that like working hard, grinding out whatever they can. It’s a really good league and I’m looking forward to playing in it again.” 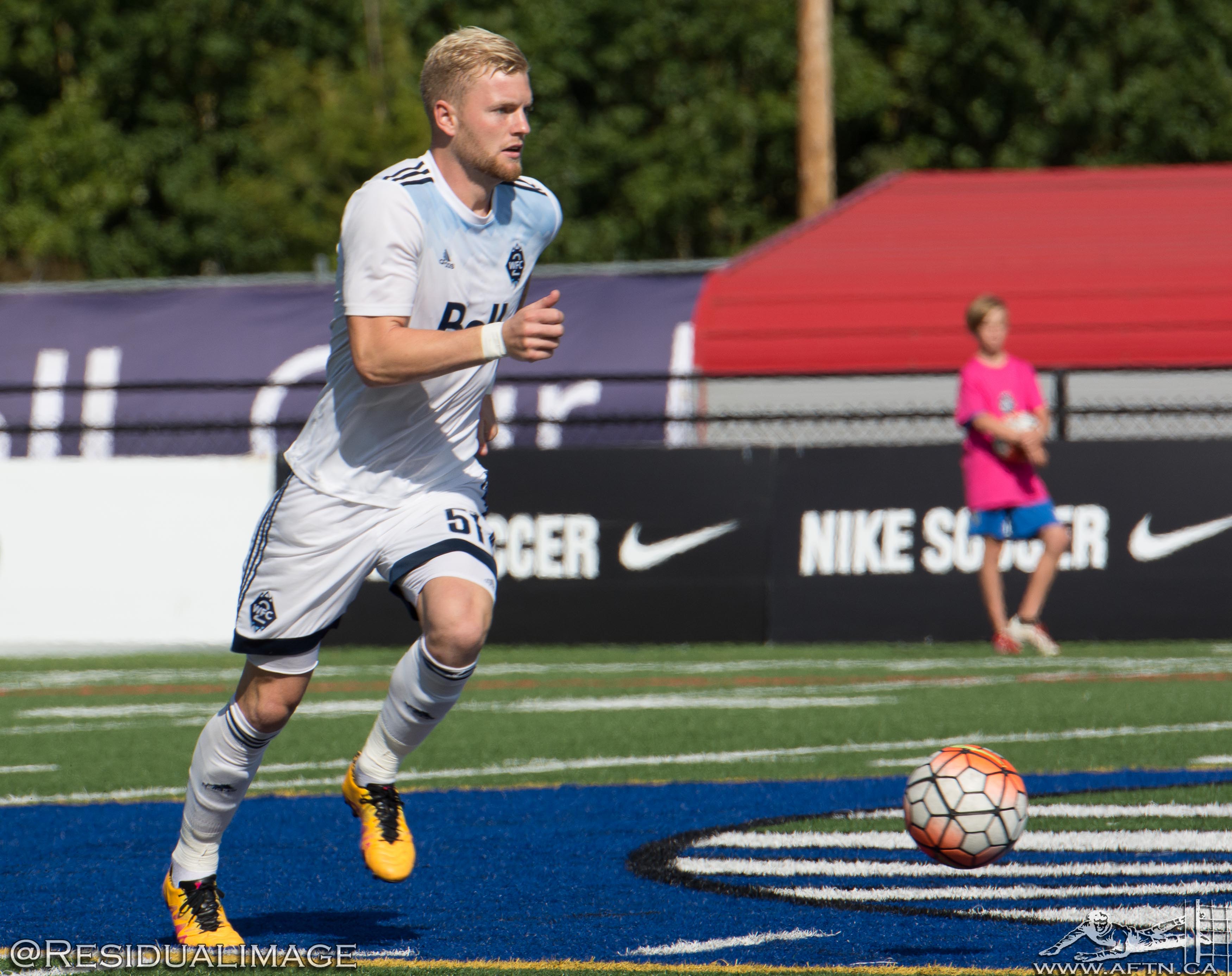 De Wit’s play last season caught the eye of Carl Robinson and the Dutchman was invited to train with the Whitecaps first team on a number of occasions, along with being called up to three of the ‘Caps CONCACAF Champions League squads and making his first team debut in the friendly against Crystal Palace in July, where he played the last 29 minutes of the match.

His time with the first team may have been limited so far, but he’s found the experiences extremely beneficial.

“Even though I’m playing one game, it’s the experience,” de Wit said. “With guys like Pa [Modou Kah] and Kendall [Waston], just being around and seeing how they prepare for a game. Seeing how they focus in the dressing room, how they go on the field, how they do there.

“Usually you’re in the stadium, so you’re a bit further away. Now you’re closer, you can keep an eye on them, see how they’re talking in games, how they’re doing. That’s something that’s really important for a young player to pick up these things from experienced players.”

There’s been a few staples for the Whitecaps under Robinson. He likes to play a two man defensive shield in a 4-2-3-1 formation. He likes to play counter-attacking football with fast wingers, especially on the road. And he likes to carry five centre backs on his MLS squad.

Right now he’s down to four, with David Edgar out with a season-ending knee injury. Robinson’s not in any rush to add to that number, and is content to run with Waston, Tim Parker, Christian Dean, and Cole Seiler for now, but he’s keen to see the battle play out between de Wit and this year’s second round MLS SuperDraft pick Francis de Vries.

It’s a competitive battle new WFC2 coach Rich Fagan hopes will bring the best out of both players, and that can only help the team for the season ahead.

“I expect a good season from Sem,” Fagan told us. “Him and Francis, they complement each other really well. Obviously there’s the balance of having the right and the left, but they have a very good understanding of one another’s tendencies already, which is fantastic.

“I expect not only Sem to have a good season, but Fran, and at the end of the day the cream will rise and whether it’s one or both, who knows, but I expect them both to have good seasons.”

Both players headed to Wales with the first team squad in January, but while de Vries was able to show his stuff on the pitch, an injury curtailed de Wit’s preseason plans. He views it as an opportunity missed, but he’s got himself back and is raring to go and hungry to succeed.

“I’m good, I’m healthy, and I’m working hard to get my fitness back,” de Wit said. “I’m at 95% and I’m really looking forward to start the season and see where I am as a player now, after the offseason, and do whatever I can.”

Driving him is the lure of a MLS contract. He may have missed out on the chance to impress in Wales, but he knows in this game such chances sometimes don’t come around too often. A solid start to the USL season will push him hard in Robinson’s mind and he’s keen to seize upon that opportunity.

“You always have to,” de Wit said. “You’re in the second team man. Look at last year with Kyle Greig, Brett [Levis], Alphonso [Davies]. They go halfway through to the first team. It’s always in the back of your head.

“I went to Wales and had a tough preseason injury. I wasted that opportunity. Now I’m looking forward for a new one and I will grab that one with both hands. I’m just going to work hard. That’s all I can do. The rest is up to them.”

It feels like it may be a tough year ahead for WFC2. With a very young midfield, there’s creativity and good engines, but no old head to perhaps guide it. It’s not looking like a team that will run riot in the goals scored column either. That will put more pressure on the Whitecaps defence to keep the back door shut and goals allowed tally down.

But De Wit is confident this year’s side can at least emulate what the team achieved last season.

“I hope we can do the same as last year, make the playoffs and go to the finals,” de Wit told us. “As a group we’re a hard working group and [plan to go out] and try and win the final this year.” 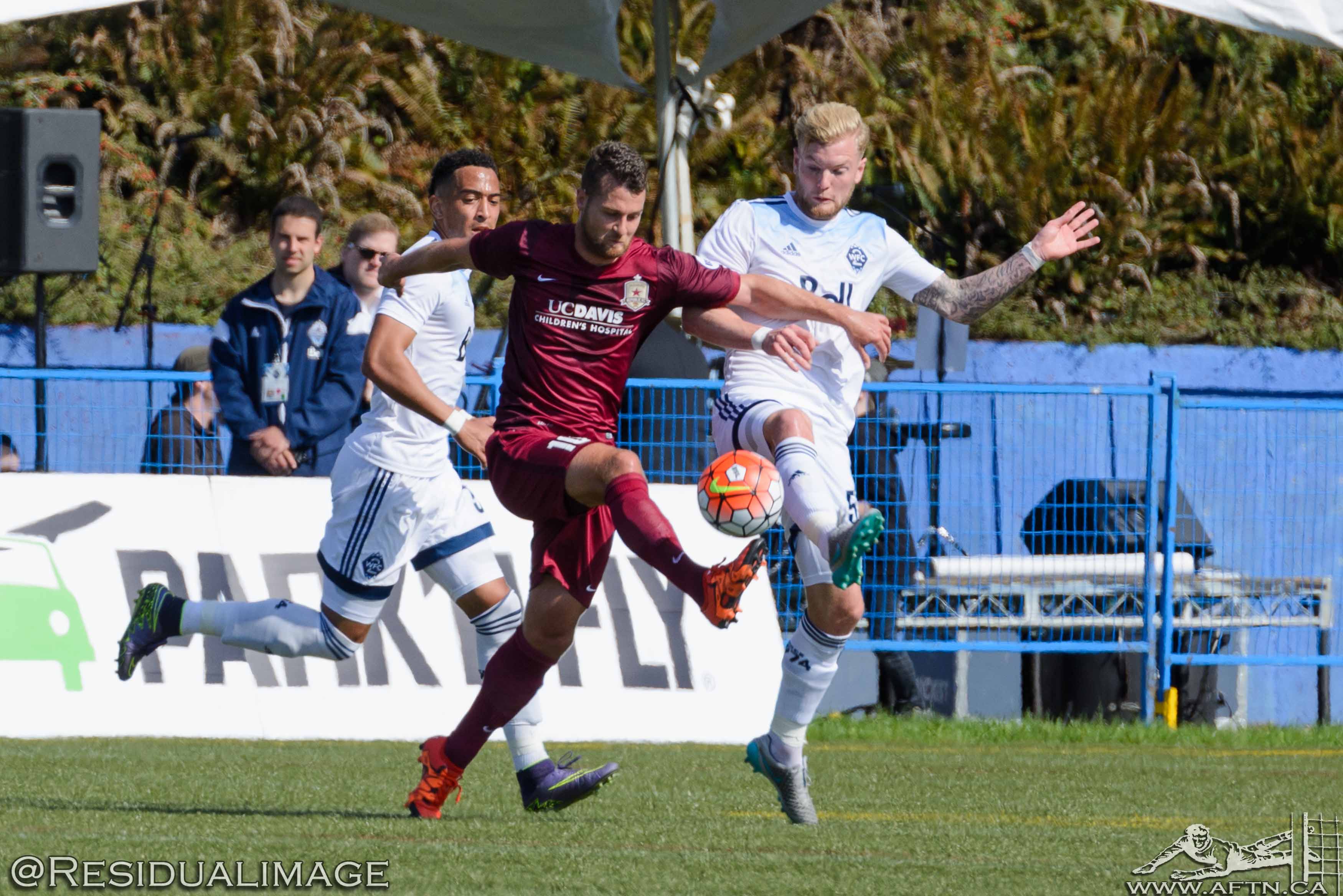