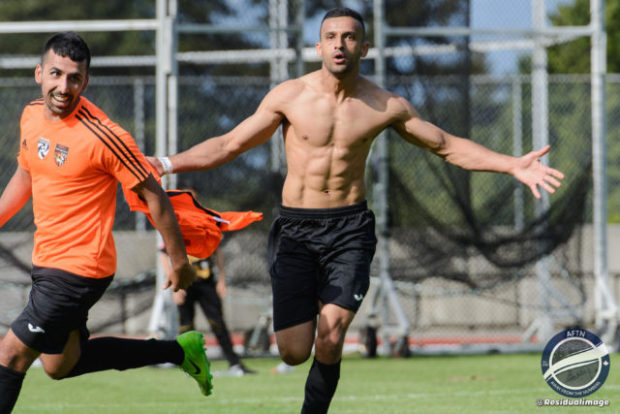 The Vancouver Metro Soccer League (VMSL) Premier Division has new leaders, two of them in fact, after an action packed weekend of matches.

The latest round of games cemented the gap that the top four sides now have over the chasing pack, but there was also a lot of drama at the other end of the table, with some big names facing a battle to beat the drop a third of the way through the new season.

The match of the week on paper was clearly the 1st v 2nd battle at Newton on Friday night between 2017/18 Premier champs BCT Rovers Hurricanes and current league leaders Rino’s Tigers. And it lived up to its billing on the pitch, with the Surrey side running out 3-2 winners in a hotly contested match up.

The first half was explosive with the home side running out to a two goal lead by the midway mark.

Nick Soolsma timed his run perfectly to get onto a long through ball 17 minutes in and made no mistake in tucking it away. The player/coach turned provider five minutes later as his corner was helped on by the Tigers goalkeeper right onto the head of Pavi Dhillon who made it 2-0.

Yuto Kimura pulled one back for Rino’s in the 29th minute, chipping the ball over the onrushing Hurricanes keeper as he was played in, and the league leaders were back on level terms four minutes later when leading scorer Farivar Torabi found himself open in the box with the ball 10 yards out and drilled home the equaliser for his 8th of the season.

The action was calmer in the second half but the winner eventually came with 10 minutes remaining and it was the home side that got it. A long Hurricanes throw in was headed on up the left touchline by a Rino’s defender sparking a Rovers attack. The ball was soon squared to Dhillon in the box and he fired home what was to prove to be the winner from eight yards out.

A huge win for the Hurricanes and you can see video of the whole match below.

That victory saw the Hurricanes leapfrog the Tigers to the top of the table, earning them a two point lead over their opponents and sending Rino’s crashing down to fourth by the end of the weekend’s action, showing just how tight the battle for the title will be this season.

The Hurricanes were joined at the summit by West Van FC on Saturday afternoon, who ran out 2-0 winners over Guildford FC FASA at Ambleside. Eoin McCormack was the hero for the Amblesiders, hitting a second half double in the 49th and 87th minutes to secure the three points.

Rovers Hurricanes and West Van remain unbeaten eight matches into the season, with the only points either side have dropped coming in the 1-1 draw between the two teams earlier this month. Breathing down their necks though are defending VMSL champs Croatia SC, who dropped their first game of the season to Rino’s but who have been unbeaten in their seven matches since then.

Croatia travelled to Surrey on Friday night and saw off the challenge of SFC Pegasus, running out fairly comfortable 3-0 winners. Mario Kovacevic sent Croatia into the lead at half time with his 36th minute effort, then two goals in two minutes just past the midway point of the second from Farzad Ali and Kai Vockeroth killed off the Horsemen and gave the visitors the victory.

That win moved Croatia up to third in the table, just a single point off the top two. Their next two matches are set to be crackers that could have a huge impact on the final standings coming February as they host Hurricanes at Burnaby Lake on Friday night (kick off is 8.10pm) followed by a trip to take on West Van the following Saturday.

After a strong start to the season, Pegasus now sit in fifth place, eight points off the lead and they’re in a pack in the middle of the table that will now be battling intensely to secure a Provincial Cup spot. But there’s also a very interesting battle developing at the other end of the table as some unexpected teams certainly now seem to be in a relegation dogfight.

Promoted side ICSF Columbus remain bottom on a solitary point and still searching for that elusive first win. Their latest loss came at home to last year’s Division 1 champions Burnaby Selects White Eagles, who picked up three big points in their own battle to avoid going straight back down with a 4-1 victory at Burnaby Lake on Friday night. 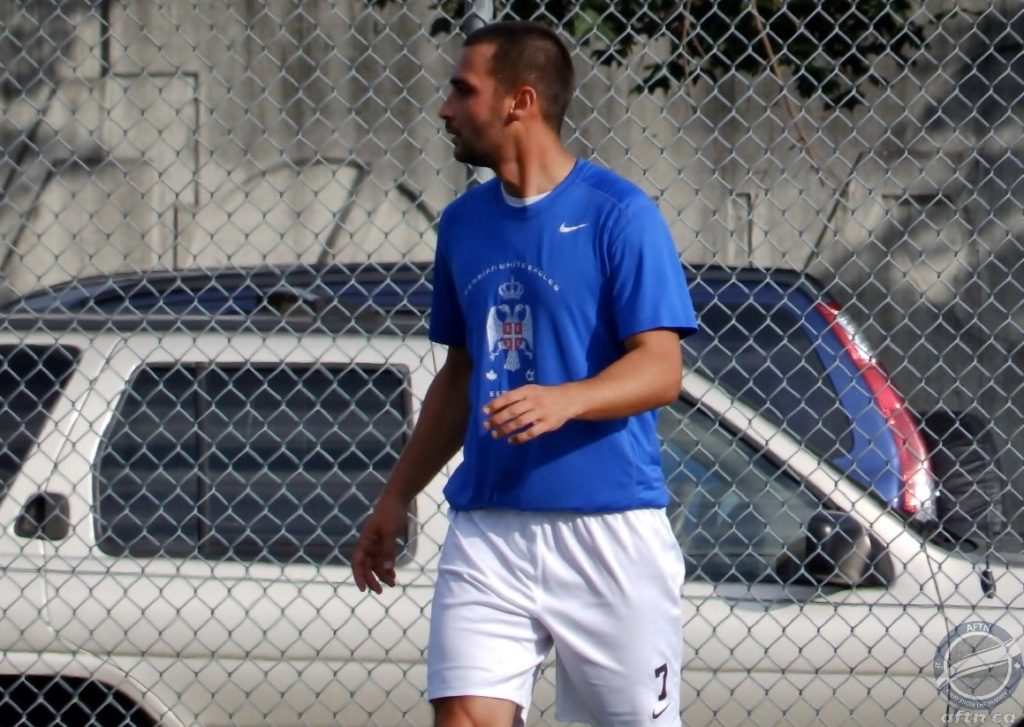 VMSL Golden Boot leader Vladyslav Matlash (pictured above) took his tally for the season into double figures with a brace moving him on to 11 goals for the campaign. Samuel Lee and Vuk Erbez hit the other goals for the White Eagles, with John McEown on the scoresheet for Columbus.

The win sees the White Eagles sitting four points above the drop zone in 8th place, two ahead of Guildford FC FASA, and four ahead of the two surprising teams down there, CCB LFC United and Coquitlam Metro Ford Wolves.

CCB returned to VMSL action after a couple of weeks off for their Challenge Trophy exploits at the nationals in Newfoundland earlier this month, but with wasn’t the happy homecoming they were expecting as they fell to a narrow 1-0 loss to Club Inter EDC Burnaby on Friday night with Alex Marrello’s winner coming in the 61st minute.

That loss leaves CCB third bottom of the Premier Division, but they do have two games in hand on those around them, with one of those matches being against bottom placed Columbus. With the talent they have on their squad and the college players that will soon be coming in to bolster their ranks, it will be somewhat stunning to see them still down there this time next month.

Can the same be said of Coquitlam Metro Ford Wolves? The once dominant back to back VMSL champs are struggling this season with just one win and one draw to show for their efforts through their first eight matches. Their latest loss came at home to NVFC Norvan at Coquitlam Town Centre on Friday night.

Yigal Bruk continued his goalscoring exploits to grab his sixth of the season, with Connor Dennehy also on target for the north shore boys to give them the 2-1 win. Carlo Basso grabbed his fourth of the season for Metro Ford but they couldn’t find another.

So another week of twists and turns in the VMSL top flight, all of which leaves the standings as follows: 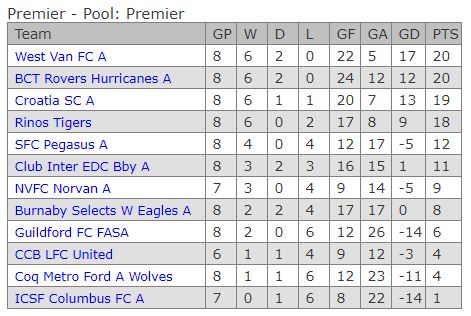