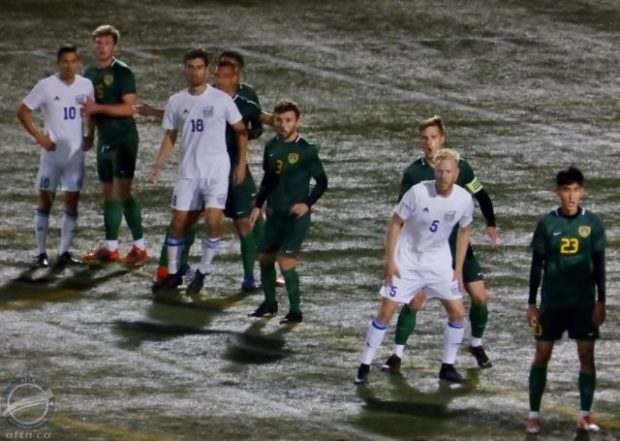 The number one seeded UBC Thunderbirds are heading back to the Canada West Final Four after a hard-fought 1-0 quarter-final win over the visiting University of Alberta Golden Bears in wild and windy conditions at Thunderbird Stadium on Friday night.

The sides had met in Edmonton in September during the regular season, with UBC running out easy 5-1 winners, but this one always felt like it was going to be different, despite the Golden Bears struggles for a lot of the season and heading into the match as heavy underdogs.

UBC dominated the play, outshooting their opponents 13 to 4 and creating a number of other goalscoring opportunities on top of that.

Alberta were bending but not breaking, weathering both a literal and figurative storm, but their resolve was finally broken in the 76th minute when former Whitecap Jordan Haynes curled a corner kick straight into the Alberta net for what was to prove to be the only goal of the game.

⚽️ MSOC | @ubcmsoc breaks the deadlock thanks to Jordan Haynes' crafty cross that curls in at the back post untouched in minute 76. T-Birds up 1-0 over @BearsandPandas in @CanadaWest QF playoff action.#GoBirdsGo pic.twitter.com/bGLvGz9Lb9

An Olimpico worthy of winning any quarter-final match, and no less than UBC had deserved after threatening to break the deadlock off so many set piece plays.

But the longer the match went on, the more belief Alberta had of pulling off the upset, so while it wasn’t pretty at times and a bit of a slog in the conditions, this potential banana skin of a game eventually passed without a fuss.

“That was a grind,” UBC head coach Mike Mosher admitted after the game. “You knew that team was going to come in, be well organised to play against, and be a good team. It was never going to be easy and I told the guys on the Monday after we came back from beating them that I think we’re going to get these guys and it ain’t going to be easy, and that’s exactly what we got.”

Alberta headed into this one after a disappointing fourth place finish in the Prairie Division, but there was nothing to separate the two teams on the scoreboard for much of the match.

Golden Bears rookie keeper Liam Collens struggled with crosses into the wind for much of the first half, while the Thunderbirds Jason Roberts didn’t have much to do. UBC sensed a way through and peppered the Alberta goal at the start of the second half, but found Collens and his backline in excellent form to keep them at bay, before Haynes got the breakthrough and after that there was no way back for the Prairie lads.

“We knew that the second half was going to be different,” Mosher said. “We had the wind at our backs. I thought we were probably the better team in the first half, but we just figured the second half the game would change, and it did.

“That first 15, 20 minutes we had several decent opportunities. The one that we get was a little bit of an odd one, but that was always going to be part of it on the day with the wind factor being what it was.”

Haynes’ Olimpico was the difference maker and the Thunderbirds set piece delivery was a danger all night with the right back always right in the thick of the action.

With that already existing threat to Alberta exacerbated with the swirling wind, it felt only a matter of time before UBC broke the deadlock, and while it may have taken them longer than they would have liked, the gameplan eventually worked.

“We talked about that actually before the game,” Haynes told AFTN after the match. “We wanted to get most of the delivery in and around the keeper, just because we knew he was a first year and may be a little shaky. We just wanted to get bodies around it. 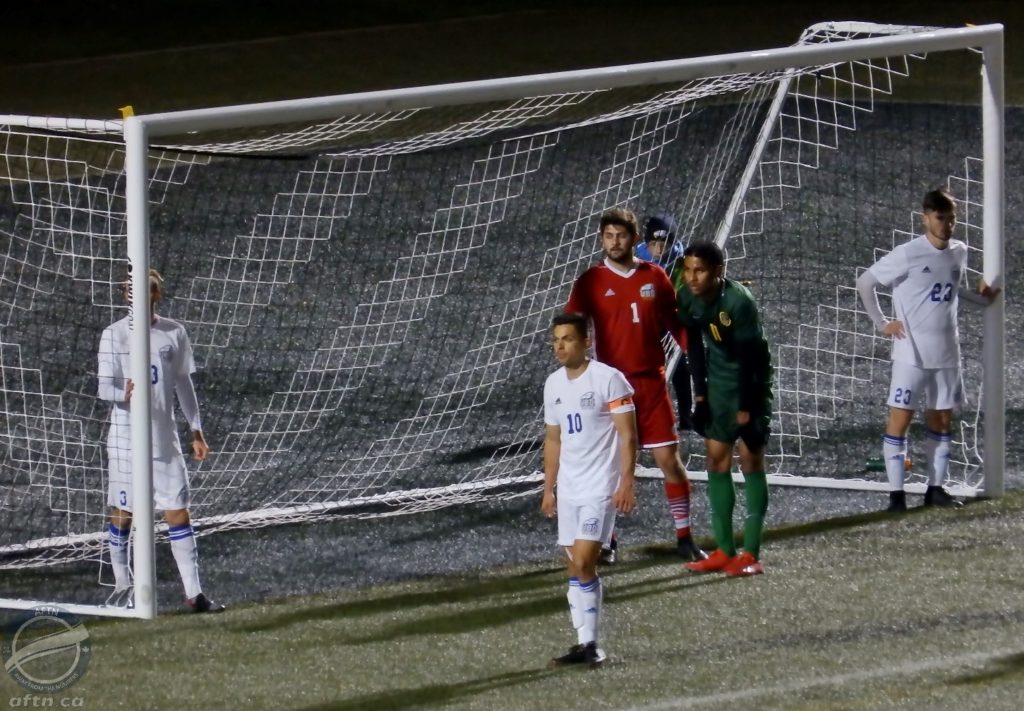 The victory took UBC another step closer to adding to their already record haul of 19 Canada West titles and a place at next month’s U Sports nationals in Montreal. The Thunderbirds will host the Final Four for the third straight season and are looking for the threepeat after successes in 2017 and 2018.

Next up for UBC will be the winner of Saturday’s quarter-final between the University of Saskatchewan Huskies and the UVic Vikes in Saskatoon. That semi-final match up goes next Friday night at Thunderbird Stadium, and UBC could find themselves with an even sterner test against Prairie competition, with Saskatchewan coming into the playoffs on the back of six straight wins and only giving up two goals in the process.

If that’s how the draw plays out, it has the making of another tense classic, but with experienced former pros like Haynes, Jackson Farmer, and Mitch Piraux in their line-up, this UBC squad has always felt like it was perfectly built for a deep postseason run.

“We’ve got a lot of experience on the team,” Haynes told us. “Mitch, Jackson, and myself, we’ve gotten quite a bit of experience with other teams in the past in pro environments. We’ve been through playoff experiences before, so we’re more than capable of doing a really good run in the playoffs and being well prepared for it too.”