Vancouver Whitecaps haven’t had their troubles to seek this season.

We won’t list them here, as we want to keep this piece brief! Let’s not even start to go into the whole Beckham fiasco.

After a rain induced weekend which many of the Club officials won’t forget, I’m sure the general feeling was that a trip to the Bay area would be a nice way to relax and forget about some of the strains and hassles this inaugural MLS season has caused.

The team managed to get themselves to San Francisco and San Jose in one piece. Unfortunately, the same couldn’t be said of the Caps kits.

AFTN isn’t sure of the exact circumstances that led to the latest problem for the Caps, but let’s just say that not all of the team’s strips made it to Buck Shaw Stadium in Santa Clara.

We’re not sure when they found out about this, whether it was game day or the night before, but players did not have jerseys and they’re kind of an integral part of the game!

What could the Club do at short notice?

As it turned out, it was a dream come true for four fans.

Every fan would love to play for their team. If they can’t have that, then getting an actual game worn jersey off a players back is the next best thing. Or let’s make that second best thing.

The next best thing turns out to be that quick thinking Caps officials turned to the travelling support and literally took the shirts off their backs!

The four fans gave up their shirts for the players to wear, whilst the Whitecaps gave them blue Caps golf shirts to wear during the game.

The four players who got the fans shirts were Eric Hassli, Mustapha Jarju, Davide Chiumiento and Jeb Brovsky. We believe only two of them might have been used during the actual game, as some of the fans have, let’s just say, slightly bigger physiques, but still.

In return not only did the travelling Caps fans get to see the players wear their shirts, they also got them back autographed after the final whistle and the Club are going to give the four fans another authentic jersey as a thank you once everyone gets back to Vancouver.

It was a fantastic gesture from the Club.

It’s a tale that will live on in legend amongst the Southsiders and makes me jealous as hell that I wasn’t able to make the trip down in the end.

AFTN spoke to one of the other fans who was in attendance down in San Jose. He didn’t want to be named but told us:

“The guys thought it was a joke at first when the two Caps officials came and asked them for the shirts of their back. We had a laugh about what else could go wrong this season, but fair play to the Club, they were very grateful and appreciative of what the guys did to help them out and it was nice to see the gesture of thanks they gave them in return.

I think they got a pretty sweet deal out of it in the end!

After all the bad press and things we’ve said about them this season, I have to say they handled the situation fantastically.”

San Jose numbered and lettered the replacement strips, but one player wasn’t so fortunate.

>You don’t see many fans wearing goalkeeper jerseys to the game, so Joe Cannon wore a generic green adidas strip.

Look very carefully at this still photo of his top. The “Bell” sponsor name looks like it was actually DRAWN on! [Click the pic below for a larger version] 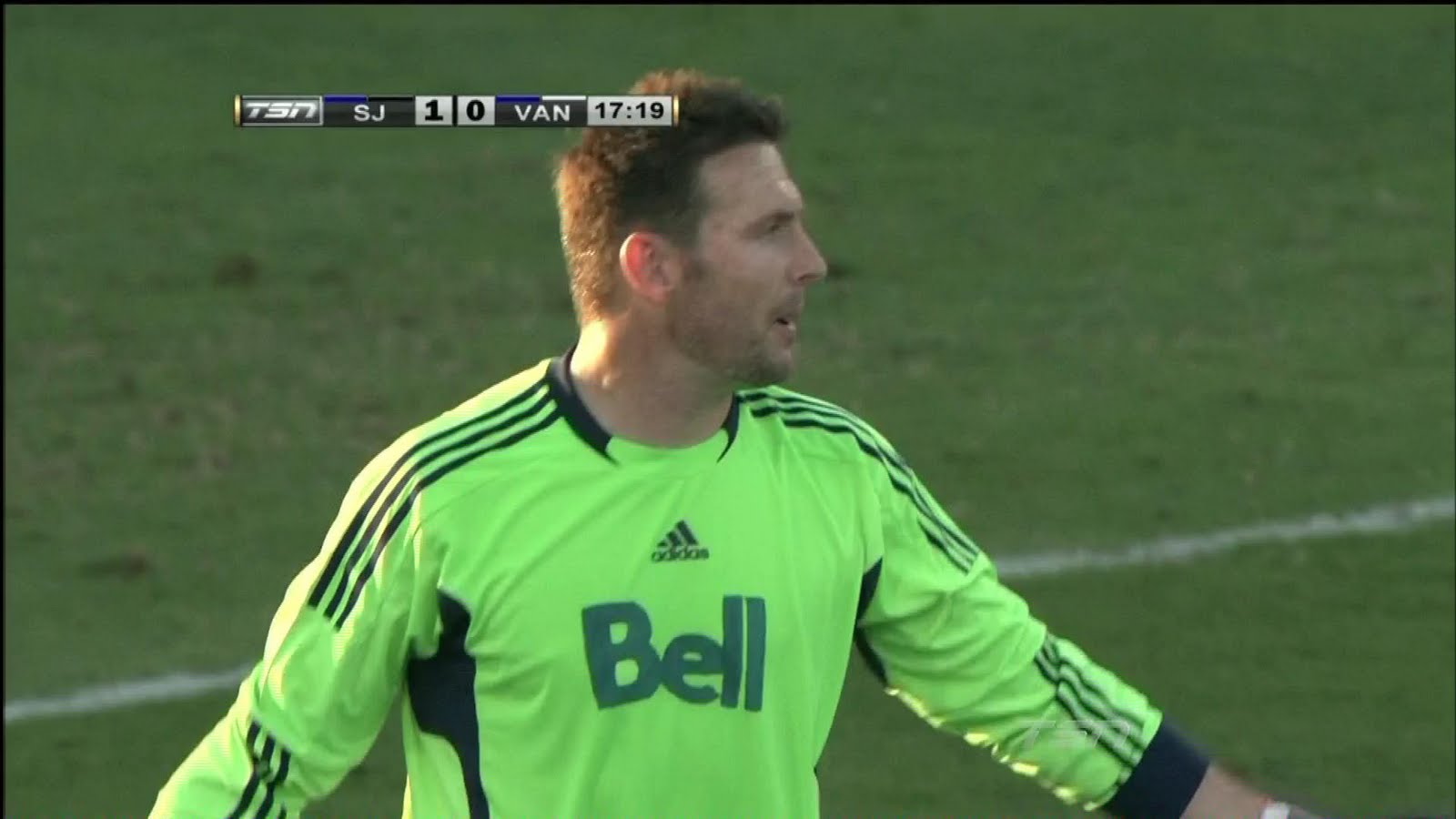 [Cheers to WhitecapsHD from the Southsiders forum for providing this screen capture.]

What’s going to happen next in this rollercoaster season for the Caps?!

Tell you what though. If they turn in gutsy and entertaining performances on the pitch like they did last night, maybe they should borrow fans shirts to wear more often.

That little bit extra heart and passion obviously is what did the trick.

Let’s give them a whole set of eleven fan strips for Portland.