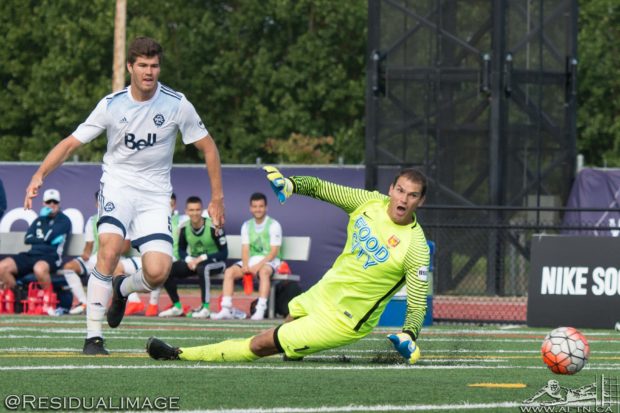 It’s amazing how just a few minutes can change your mood and the whole narrative of a game of football. The closing moments of Vancouver Whitecaps 2’s dramatic late 3-1 win over Arizona United, may also change the course of their season. If nothing else, it gives them a fantastic springboard of confidence for the USL run-in and playoffs.

With six minutes remaining, WFC2’s Western Conference Championship aspirations looked set to be dealt another blow against Arizona United, after a poor first half performance left the Whitecaps badly needing a spark or two to reignite their hopes for as high a playoff seeding as possible.

Those sparks came in the form of Blair Gavin’s 58th minute sending off and Sanner’s late ten-minute hat-trick.

After trailing to Arizona’s 17th minute opener, Vancouver missed a slew of excellent chances to get themselves back in the game. It was looking like another bad beat story, and a continuation of their recent run of poor form, before super-sub Thomas Sanner stepped up to fire home goals in the 84th, 87th, and 94th minutes to give WFC2 all three crucial points.

“I give him full credit,” WFC2 coach Alan Koch said of Sanner after the match. “Obviously an amazing performance to come off the bench and do that. Give the whole team credit though. I thought in the second half we showed the desire, the application. We played with a lot more confidence in the second 45 minutes, which allowed us to try and break them down. We’re ecstatic to get three points like this in an important game as today was. It’s huge for us.”

Massive, when you look at the Western Conference standings, but more on that later.

It was a strange game, played in a somewhat bizarre gale force wind on an otherwise beautiful sunny day at Langley’s McLeod Stadium. The wind was a killer, and both sides struggled to play with it in their favour, prospering when forced to play against it and all four goals were scored playing into the wind.

You would think that having that wind advantage would have seen Vancouver peppering the Arizona goal with shots, but they seemed devoid of ideas in a poor overall first half showing, before bouncing back in style in the second. Although they were made to battle for it, wasting so many chances along the way before Sanner stepped in and saved the day as Vancouver Arizonaed Arizona.

“I thought we were a little bit flat,” Koch said of the team’s first half performance. “I think maybe we respected them a little bit too much. For our young group, to go and play the game they played in Arizona and be 2-0 up and allow them to come back in and lose 3-2, it leaves a few scars. But part of the development process is dealing with those situations.

“Thankfully we got that out of the way in the first 45 minutes and then showed, I use the word courage. A lot of courage and a lot of confidence to try and go with them in the second 45 minutes. We spoke about taking calculated risks. When you get into their half, you have to take a risk and you have to have the strength of character to actually take that risk. Thankfully we did.”

It was certainly a much improved second half performance from the ‘Caps, with the conditions playing into their passing game, so what was said at half time to produce such a turnaround?

“We spoke about a lot of things,” Koch admitted. “Some of them are subjective, some of them are objective. We’ve got a great young stats guy, Drew Foster, who works for us and he came in said we turned the ball over a ridiculous amount of times in the first 45 minutes. You use that objective data to give us something that has to be better. So in possession we said we’ve got to make sure we keep the ball and don’t turn it over. 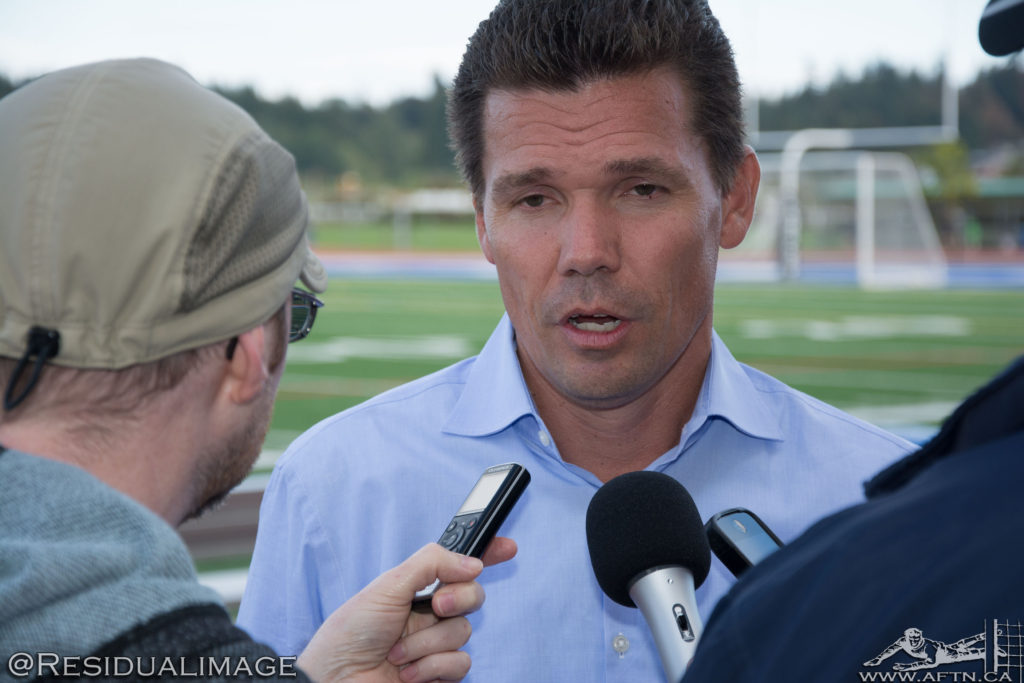 The idea for this Whitecaps 2 side of course is to get the players ready for the first team environment. Mirror their playing style. Well the good parts at any rate. With the defensive mistakes and missed chances in front of goal, they could be ready! First-teamitis looked to be in full effect for much of the match.

Arizona’s goal came in the 17th minute, when Tyler Blackwood hit his eighth of the season after pouncing on a horrible pass from Sem de Wit to Kadin Chung and ran in goal to easily fire home past Spencer Richey. There were a few other scary defensive moments along the way.

Chung returned to the line-up after missing the last couple of games through injury, but was given a torrid time by Blackwood for much of the match, but it’s all just part of his development and let’s everyone see what he needs to work on going forward.

“I think in games like that, you see in the first 45 minutes they picked on him a little bit,” Koch noted. “If you just look at him, he’s getting stronger. Give the kid full credit. He’s worked very, very hard at it, but it’s not his biggest strength. We play all the teams and teams know and they try and pick on him.

“What I could have done, the easiest for him today, was take him off. But we left him out there, we let him figure it out and he kept on going. Give him credit, he’s a big part of the push in the second 45 minutes to get the result.”

Chung is still only 17 and his upside is massive. Games and tests like that are what will help with his development to get him ready for that next level. But he’s one of a number of exciting young Residency talents that have come in to the WFC2 team in the past year.

Signed at the same time as Chung, 18-year-old Tommy Gardner has had limited minutes this season, but his mazy run to set up Thomas Sanner’s first goal was something special. Real highlight reel material we’ll be talking about for a while, and shows his potential as well.

Joining Koch on the Whitecaps bench this afternoon was veteran defender Pa Modou Kah. He wasn’t there for a playing capacity, but a coaching one, and was as vocal as you could imagine and want. Expect to see more of him in this role going forward.

“He’s been great this week,” Koch said of Kah. “He’s been around our group a little bit. He’s been around the Residency group. It looks like he’s going to be making a transition in his life, so it’s great to have him there. It gives us different perspectives on things.

“It’s good for him though to be around the different age groups within the club. It was nice to have him on the bench. Today his enthusiasm was infectious and you could feel I think a big part of scoring the goals at the end, and the feelgood factor, was him. He likes to talk, as we all know, but he can say a lot of good positive things which can really help everyone else out.”

The win was massive for the Whitecaps as the playoff race in the USL Western Conference heats up.

The ‘Caps have led the table for months, but their recent run of form had seen them not only lose their top spot, but head into today’s game against Arizona having dropped to fourth in the West after Rio Grande Valley’s win over Colorado Springs Switchbacks earlier in the afternoon.

As it stands now, however, the 3-1 victory vaulted WFC2 back into a share of the lead in the West, tied on 40 points with the in-form Sacramento Republic, who they meet at Bonney Field in what will be a cracker of a match next Saturday night.

Just four points separate the top six teams in the West right now, and although you have to feel that Sacramento must now be the favourites to wrap up the regular season title, Vancouver won’t be too far behind and Rio Grande have hit an amazing run of form at the right time. It’s certainly all to play for, with half a dozen teams in with a real chance.

“I think, to be honest, every team in this league is very, very good,” Koch told us. “There’s obviously one or two at the bottom that have kind of fallen by the wayside and it doesn’t look like they’re competing for the playoffs, but everyone else is in it.

“We’ve set ourselves up now for a really exciting development opportunity for our group because it looks like next week now we play Sacramento, at their place, tied at the top of the league. What’s more exciting than that? We’re going to go and take our young group to play in front of 11, 12 thousand fans. That’s a great development opportunity for these guys. They’ll go in fearless. Play with confidence, like they did in the second 45 minutes [today]. We’ll go there on the road, like we do, and expect to get points.”