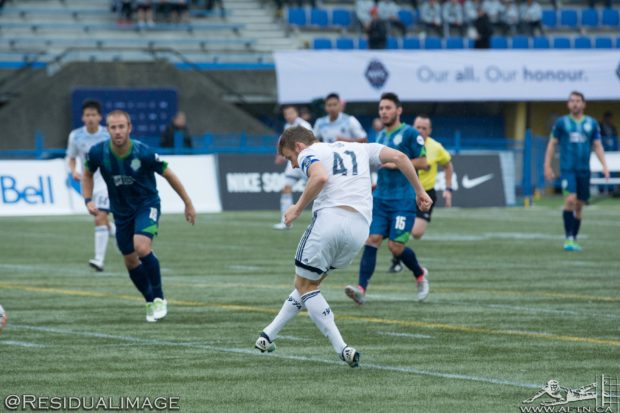 It’s back to back USL Western Conference finals for Kyle Greig following WFC2’s 3-2 semi-final win over his former club, OKC Energy, at Thunderbird Stadium on Saturday.

Greig led from the front in the ‘Caps dramatic late victory, scoring Vancouver’s second goal, and having narrowly lost out to LA Galaxy II in last season’s final, the 26-year-old is determined to go at least one step better this time around.

“It feels great,” Greig told reporters after the match. “I’ve been to the Western Conference final once. Last year we came up a little bit short so looking to carry this momentum into next week.”

Things can change quickly in football. One year ago, Greig was helping OKC reach the Western final. Yesterday, he helped knock them out.

After coming close on several occasions in the two previous meeting between the teams this season, he also finally grabbed a goal against his former club, to make it two goals in two playoff games for the ‘Caps.

“It was amazing,” Greig said of his feelings at the goal. “I had a chance when we were away in OKC and I fell short, then a couple of weeks ago when we played them I had a couple of chances that I should have put away. So to get one tonight, and put it in the back of the net, was a little bit of icing on the cake for me.

“I scored last week, so to be able to continue that and be in form at the right time, it was big for me and gaining a lot of confidence heading into next week.”

Greig took his goal tally to 13 for the season with his strike. Unlucky for some, especially the Switchbacks and the Energy.

The striker has led the team in goals from the very first game this season, striking up a great partnership and understanding with Daniel Haber, especially in the early going, and Greig had some special words for his match-winning strike partner.

“He’s got a killer instinct,” Greig said of Haber, who’s last minute winner sent the ‘Caps through. “He’s one of the best finishers on the team. He’s got a chip on his shoulder. He hasn’t scored for a while, so I think that one was a huge one as well.

“He had a little injury last time we played OKC and only had ten minutes on the field, so I think for him to come and show what he was made of and put in a whole shift, and score a huge goal for us, was big for him, and I’m happy for him.” 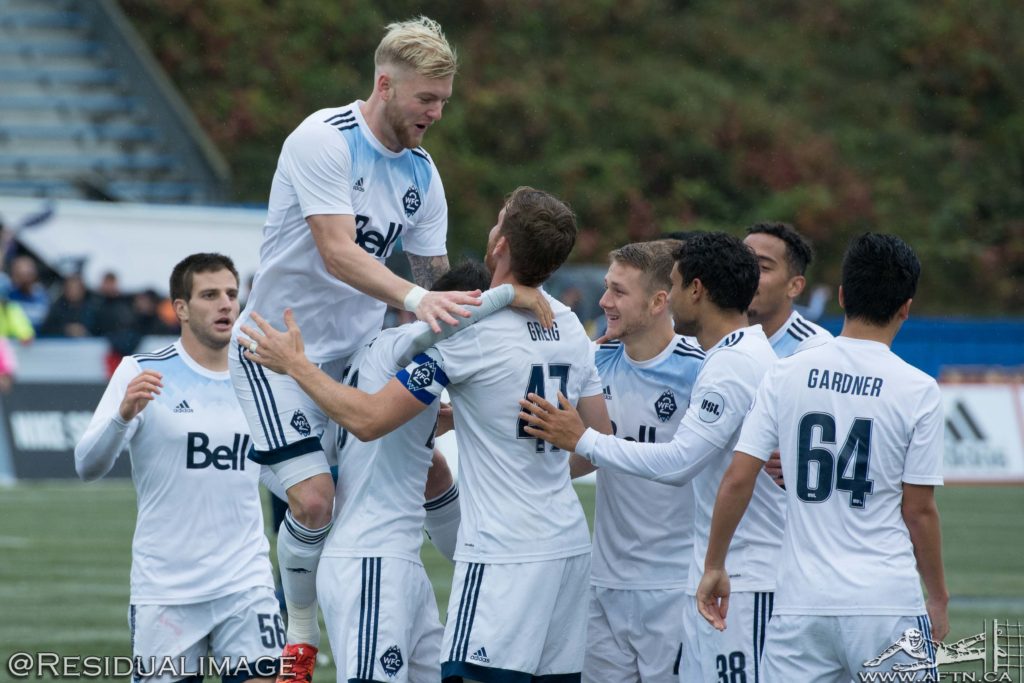 Greig was also happy by the fighting spirit shown by the team. For such a young squad, it would have been easy to let heads dropped when OKC wiped out the ‘Caps two goal advantage with ten minutes of the match remaining.

WFC2 have struggled to hold on to leads this season, but this time was to be different, and the Energy fightback revitalised the team to go on and get the job done.

“Earlier in the season, we had a couple of slip ups where we were up two goals and the other team made a game out of it,” Greig admitted. “We maybe dropped some points or even gave the game away at the end there.

“But [this win] shows a lot of character for us after coming back from a little adversity there in the game being tied. To come back and avoid going into extra time, was huge for us.”

The victory sets up a Western final for WFC2 either at Swope Park Rangers or at home to OC Blues. That semi-final kicks off at 1pm PT today and all eyes will be on that one in the ‘Caps squad.

“I’ll definitely be watching that game,” said Greig. “Seeing who we go up against and try to prepare for next week. We’re going to enjoy it. Enjoy the victory [against OKC] but start looking forward as soon as that game goes on.”

The ‘Caps will learn their opponents in a few hours, and as fantastic as it would be to host, Greig knows that they’re equally as comfortable on the road this season and having nothing to fear from whoever they end up playing.

“Playing at home all the time, making a team travel and getting a little bit of heavy legs is big for us,” noted Greig. “But at the same time, if we have to go on the road we’re confident doing that. We’ve got plenty of wins on the road this season and we’ll take it however we can.”

WFC2 are now two wins away from USL Championship glory. With either New York Red Bulls II or Louisville City awaiting them, the toughest tests are still to come.