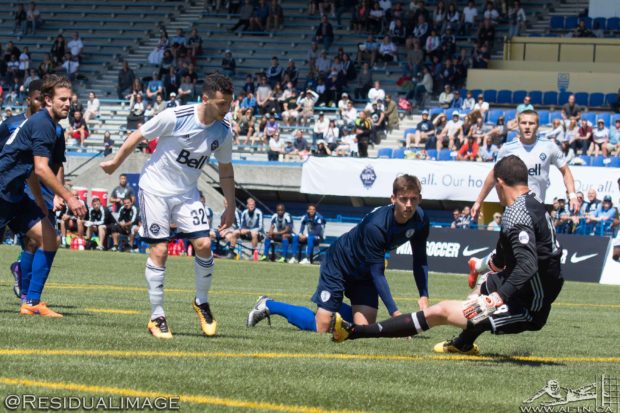 It took 120 minutes to decide who the ‘Caps opponents were going to be next week and where they’d be playing. In the end a nine man Swope Park side pulled off a stunning 2-1 extra time victory to host the final.

WFC2 may be going on the road for the second time in these playoffs, but they’ll be heading to Missouri very confident that they can get the job done and reach the USL Championship game.

The two teams have already met twice this season, with the ‘Caps winning both, and they’ll be hoping for more of the same.

The first meeting was in Kansas City on April 27th and saw Vancouver fight back from falling behind to a 15th minute goal. A Kyle Greig penalty kick tied things up at half time, before a Ben McKendry cracker of a dipping volley nine minutes into the second half gave the ‘Caps the three points.

The teams met again at Thunderbird Stadium on June 12th, with the ‘Caps running out 3-2 winners in a game that was a lot more comfortable for Vancouver than the scoreline suggests.

A Marco Bustos brace had WFC2 two up and coasting by the 23rd minute mark, and when Alphonso Davies added a third with ten minutes remaining, it looked all over bar the shouting.

But the fighting spirit shown by Swope Park in their semi-final victory was also on display in Vancouver that day, and two goals in three minutes in the closing stages of the match set up a grandstand finish. The visitors would have come away with a point as well if it hadn’t have been for a fantastic save from Marco Carducci on the last kick of the game. Definitely a Whitecaps ‘save of the year’ candidate.

UNREAL SAVE by @mcarducci96 who reacted like a 😾 to save the day for @wfc2 in the last second! #VANvSPR #USLhttps://t.co/P0LZPxrcIt

Those two wins will certainly see WFC2 heading to Missouri in a very confident mood, and their chances will also receive a massive boost with Swope Park Rangers missing both of their starting full backs for the match after their sending offs against OC Blues today.

Ever Alvarado was sent off in the 68th minute for a horrible lunging tackle, followed by faking a head butt, and he was joined for an early bath by right back Tommy Meyer two minutes before the end of normal time.

With two back ups now forced to fill in, Vancouver will certainly be looking to exploit their pace up both wings, with a hopefully fit Alphonso Davies having the potential to run riot.

We’d have loved for the ‘Caps to be hosting the final, but they will head to the Swope Soccer Village next Saturday with some great momentum behind them and feeling very capable of reaching the Championship game. Kick off is 5.30pm PT. Don’t miss it.