It’s that wonderful time of the season when the Vancouver Metro Soccer League (VMSL) season is juggling both league and cup action and there’s a veritable feast of football to take in.

With the 2022 edition of the VMSL Imperial Cup getting underway this past weekend, there were only four Premier Division league matches on the slate this past week, but what a series of matches they produced.

The action kicked off at Burnaby Lake on Friday evening as Inter EDC continued their excellent run of form, making it five wins in a row, and their fifth straight game where they have scored three goals, as they dispatched of ten man SFC Pegasus 3-0.

The Surrey side found themselves down a man just 18 minutes in when Paul Bahia was sent off for the denial of a goalscoring opportunity, but they managed to hold on until the final eight minutes of the match before Inter ran riot.

The deadlock was eventually broken in the 82nd minute through Zachari Ouariti-Zerouali, then Alan Camacho in the 86th minute and yet another goal from Massud Habibullah a minute later secured three big points for Inter, as they look to secure a Provincial Cup spot.

There was a huge match-up between 2nd and 3rd at South Surrey Athletic Park on Saturday afternoon as Rino’s VSC Coastal hosted VUFC Hibernian, and it was the UBC boys who came away with a big 2-1 victory.

It was a win that temporarily took VUFC to joint first in the standings, sending Coastal down to 4th in the process.

The final action over the weekend took place at Burnaby Lake on Sunday afternoon and saw Croatia SC and Coquitlam Metro Ford Wolves play to a 2-2 draw.

Bak-Yin Conrad Cheng put Croatia ahead in the 12th minute and that was how it stayed until the 72nd minute when Mario Kovacevic doubled their lead. But Croatia certainly weren’t home and dry, as Metro-Ford staged a late comeback.

Dawit Genet reduced to deficit to one in the 87th minute, and there was still time for the Wolves to get a late, late equaliser with Adam Jones earning a point three minutes into stoppage time with virtually the last kick of the game.

The last Premier action this week took place on Wednesday night. All 16 minutes of it!

League leaders BB5 United CCB and Rino’s VSC Coastal had to play out the remaining minutes of their December 10th match-up that had to be abandoned in the 74th minute due to a floodlight failure with the score tied at one apiece.

Eric de Graaf had given BB5 an early lead in the original match, before Sean Northcote had tied things up for Coastal just before halftime. That was a battle between the top two team in the division that night, and with Coastal slipping at the weekend and the chasing pack closing the gap on BB5 after their defeat the weekend before, the leaders knew they couldn’t afford any slips in this one.

They didn’t have to worry as they were rampant in these remaining 16 minutes, finding the back of the net three times through Nic Morello, Ramsey Alfantazi, and Caleb Clarke. It was quite the stunning performance and saw BB5 move three points clear at the top, with three games in hand on second placed VUFC Hibernian.

So after all of that action, here’s how the VMSL Premier standings look after Week 20 of the season: 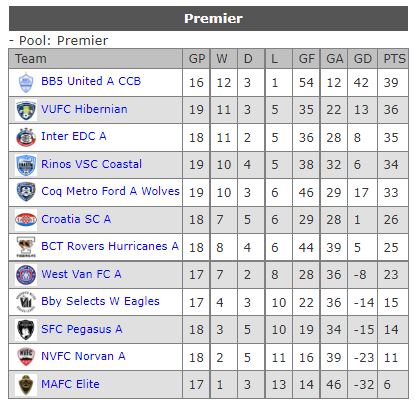 A lot of football still to be played and a lot still to be decided. Here’s what’s on the slate in the VMSL Premier this weekend: