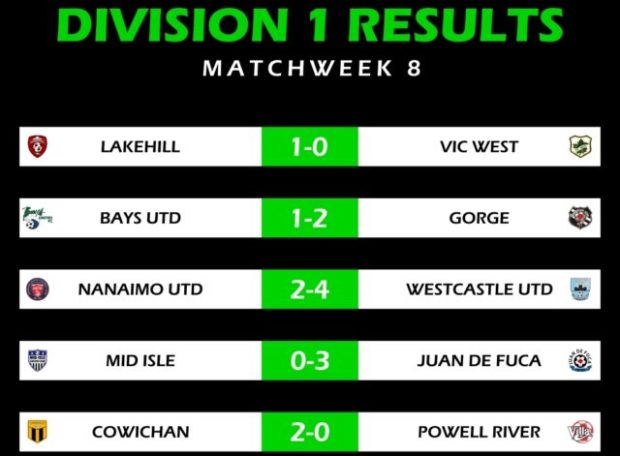 Another weekend is in the books in Vancouver Island Soccer League (VISL) Division 1.

As promised, it was a weekend that lived up to excitement expectations, with a little bit of everything. Here is a quick snapshot of what took place, in our 8th edition of the weekend wrap up for the season.

Friday opened up with Lakehill slipping by Vic West 1-0. Lakehill carried much of the play, but there was not a lot of quality chances on goal. Their lone goal was scored by veteran Blair Sturrock, while Hardeep Gahunia earned the clean sheet in what was to prove to be a very important victory.

At the Merle Logan Turf in Nanaimo, Westcastle defeated Nanaimo by score of 4-2. Westcastle’s goals were by Boland Lekeaka, Keenen Colley, a Nanaimo own goal, and Mahdi Hammoud. Scoring two goals for Nanaimo was Caleb Nwameme.

In Ladysmith on Saturday, Juan de Fuca earn three points in a strange way as Mid Isle forfeited the match to them, giving them a 3-0 result.

After all those results, here are what the standings look like, and we have some changes. 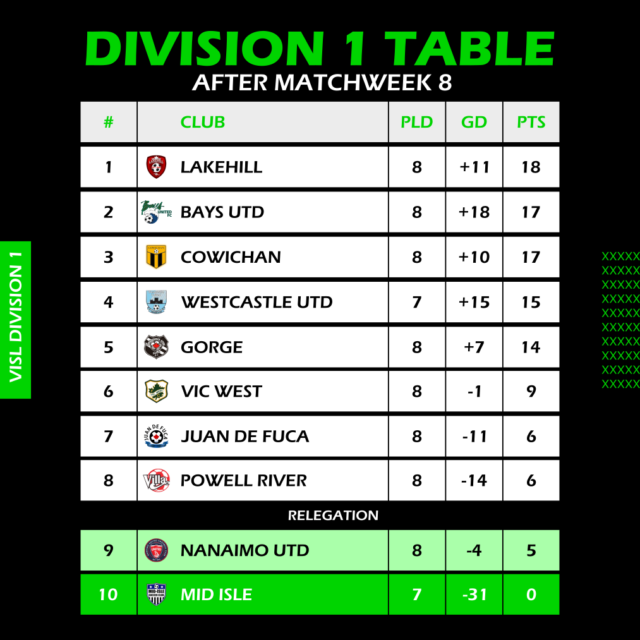 There’s new leaders at the top as Lakehill sneak by Bays. Five time defending champs Cowichan jump up quite a bit, with Westcastle nipping at their heels. The Gorge win does not look as impressive as you would think, with their five draws keeping them in the middle of the division.

In what has been a surprising year for Nanaimo – they now find themselves in the relegation zone with Mid Isle.

There wasn’t a crazy amount of goals over the weekend, but enough to see a change in Golden Boot leader board again. Here is what that looks like. 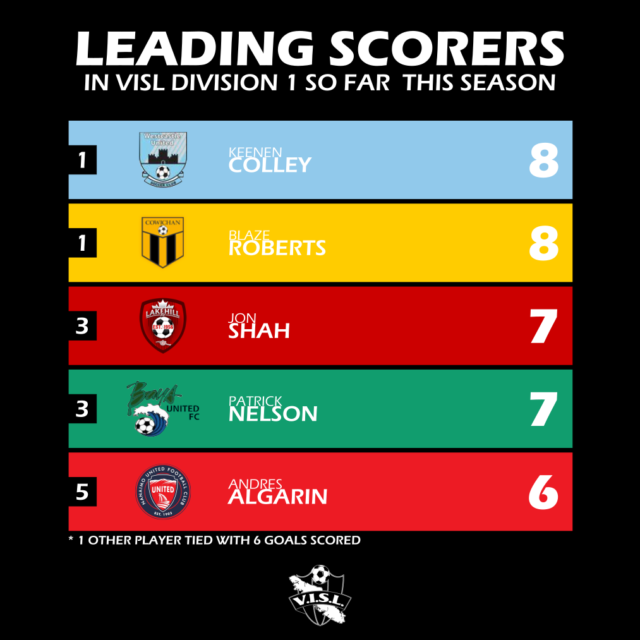 It was an exciting weekend that has shaken up the division some. The midway point of the year is fast approaching in VISL Division 1 league play and there’s another busy weekend of matches coming up in the top flight.

Friday gets off with a bang as undefeated Gorge FC host Saanich rivals, and current league leaders, Lakehill FC. This should be a big match and is in running for Game of The Week honours. Gorge are coming off a big win after toppling then division leader Bays, while Lakehill regained form by edging out Vic West last week..

Friday will also have Cowichan hosting Bays Utd at the Sherman Road Turf in Duncan. Cowichan have seemed to find their form after a shaky start, and are led by keeper Darian Achurch, who has posted three straight shutouts. Bays, meanwhile, will look to bounce back after two down weeks for them – a draw to JDF and last weeks loss to the Gorge.

Saturday will have the rest of the divisions’ games and it starts with JDF hosting Nanaimo at Westhills. Both teams are near the bottom, so they will be looking for full points to move up the standings.

Saturday will be a tough day for Powell River as they take on Westcastle. It will be a tough match for the newly promoted team as they square off at Finlayson.
Depending on results, Westcastle could jump into 1st or 2nd place come the end of weekend.

The final game of the weekend will have Vic West hosting Mid Isle. The Vic West squad will look to bounce back and get into a good swing after being on the wrong end of some close games. Mid Isle will look to change their fortunes after getting off to a very rough start in the year so far.

Here’s how this weekend’s Division 1 fixtures shape up. 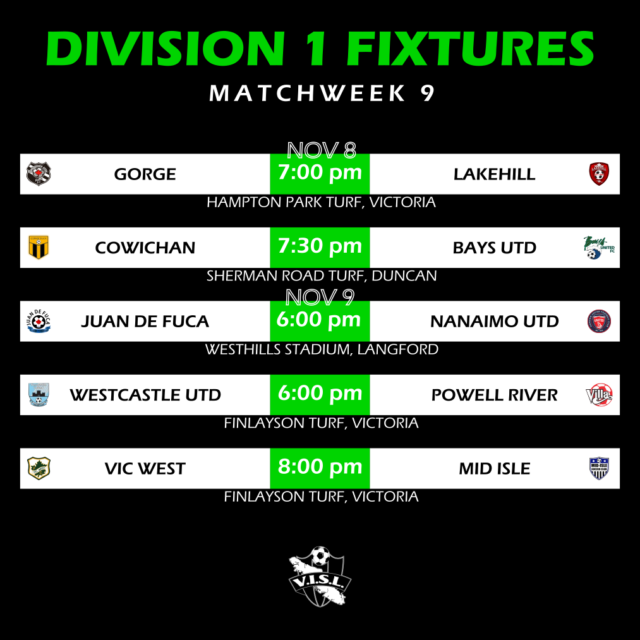 After Division 1 is finished for the weekend, the McGavin Cup Final will take place on Monday November 11, at Layritz Turf, with a 2:30 pm kickoff.

Juan de Fuca and Gorge will face off for local bragging rights, so come down to the park to renew some old friendships, and have a moment to remember those that sacrificed so much in order for us to enjoy so much. Hope to see you at the pitch, supporting local athletes, and grass roots soccer. 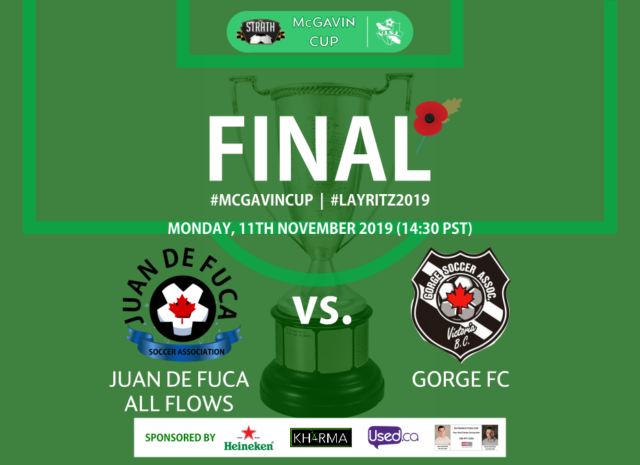