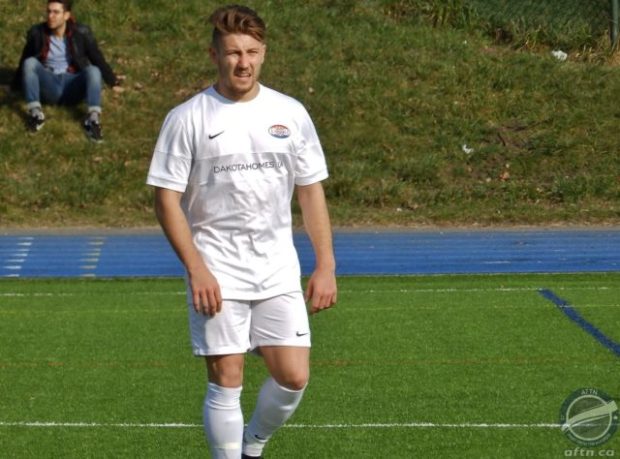 The exciting battle at the top of the Vancouver Metro Soccer League (VMSL) Premier Division took another couple of twists and turns last weekend as the joint leaders, BCT Rovers Hurricanes and West Van FC, both fell to the two teams giving chase immediately below them.

It was a pair of results that left last season’s champions, Croatia SC, sitting at the top of the summit for the first time this season, but there’s still a long road ahead and a lot of further twists undoubtedly lie in store.

Croatia got the action off and running at Burnaby Lake on Friday evening, with a 2-1 victory over BCT Rovers Hurricanes.

A goalless first half was soon sparked into life five minutes after the restart from a long range wonder goal by Croatia’s Mario Kovacevic that caught the Rovers keeper way off his line. That looked to have given the defending champs three crucial points but Pavi Dhillon had other ideas and first the Hurricanes level with three minutes remaining.

But the parity was to only last two minutes before David Malamura struck a 25 yard screamer in the 89th minute to give Croatia the win and send them to first place in the standings.

Whether they would stay there or not come the end of the weekend was dependent on how West Van fared in their match against Rino’s Tigers at Trillium on what turned out to be a very eventful Saturday afternoon.

Rino’s came away with the 3-1 victory in a match that saw two penalties, a 99th minute clincher, and the Amblesiders having a player and their manager dismissed.

Ismael Longo gave Rino’s the lead from the spot in the 18th minute after Yuto Kimura was pulled back in the box. Longo’s first effort was saved but he scored the retake after the referee had blown for the ball not being on the spot just before he struck it.

Colin Phillips fired West Van back onto level terms four minutes later with an absolutely beautiful dipper from the edge of the box and that was how it stayed until half time when the Amblesiders conceded their second penalty of the afternoon. Andrew Milne picked up a second yellow for his troubles, and Longo once again fired home after a lengthy stoppage that saw West Van’s manager Andy Bramley dismissed from the dugout and two other West Van players booked for dissent.

The ten men of West Van had their chances to level but were undone by the last kick of the game as quick Rino’s counter saw Vuk Ceranic score from just outside the box, for a victory that moved the Tigers into second place in the standings.

You can see video highlights from Rino’s win below.

The division seems to have settled into three groups of four right now with the top teams battling for the title, the bottom fighting to avoid relegation, and the middle looking to lock down a Provincial Cup berth.

Columbus stay adrift at the bottom following a 3-2 loss at NVFC Norvan on Saturday afternoon. A youth player goal and a Blake Burgon effort had the home side two up by the 27th minute mark. Columbus fought back and Adriano Negri reduced the deficit to one in the 31st minute, with Luca Locascio completing the comeback three minutes into the second half.

Columbus pushed for their first win of the season but were to end up leaving empty handed altogether as Ivan Mejia grabbed an 89th minute winner for Norvan.

Provincial and National champs CCB LFC United continued their league struggles as they fell back into the relegation places following a 2-2 draw at home to SFC Pegasus in a Surrey derby.

Jovan Blagojevic fired CCB into a half time lead and Rylan Sangha doubled their lead just after the restart. The Horsemen fought back though and Adam Costley reduced the deficit to one and Gurmaan Jhaj completed the comeback, and earned his team a point, with ten minutes remaining.

Leapfrogging their way out of the drop zone was Coquitlam Metro Ford Wolves, thanks to a first half brace from Carlo Basso. Their 2-0 win over Guildford FC FASA at Burnaby Lake on Saturday evening saw them move up two spots to 9th, but still very much in the relegation dogfight.

The final match of the weekend was an action packed affair at Burnaby Lake on Sunday evening as Burnaby Selects White Eagles saw off an Club Inter EDC Burnaby side that saw Ryan Zaharija and their manager Moe Forouzan sent off in the first half.

Inter had taken a third minute lead from Rizal Ganief, before goals in the 10th and 18th minute from Vuk Erbez had put the White Eagles in front. Ganief hit his second of the game in the 25th minute to tie things up again before Inter went down to ten men ten minutes later when Zaharija was sent off for retaliation.

Inter held on in the second half but were eventually broken ten minutes from time when Mladen Ljumovic scored the winner.

So all of those results leave the VMSL Premier standings looking as follows: 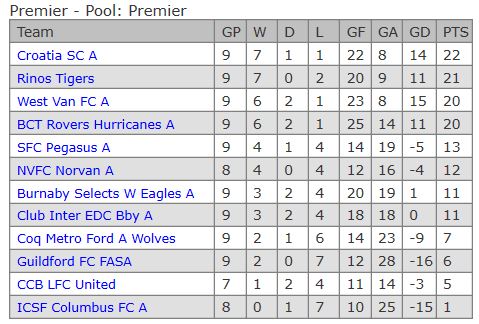