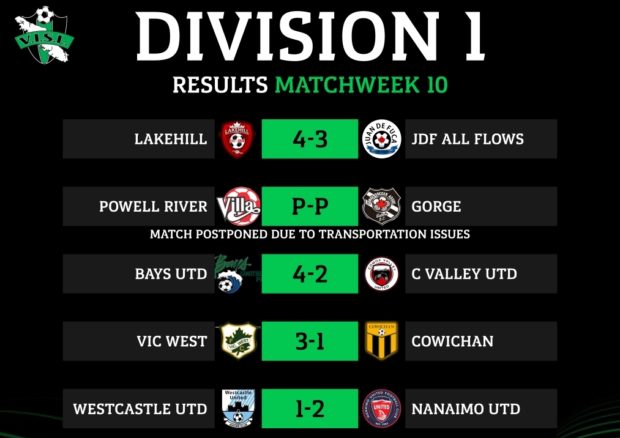 It was a very wet, cold, and windy weekend, and other than a small BC Ferries scheduling curveball, there were no other issues – and the rest of the games were played in Vancouver Island Soccer League (VISL) Division 1.

Many players and officials have never played in such a downpour, so they can now tick that off their bucket list of things to do.

All four matches played were competitive this weekend, and two games were looking like major upsets, but because you have to play the entire game – upsets and tears were averted.

Here is what happened at a glance, in the Island’s top division of amateur soccer.

Friday night started out with one of those “almost” upsets as Lakehill stormed back from behind to defeat Juan de Fuca Allflows 4-3. Juan de Fuca scored three goals in the opening 23 minutes through Keevan Webb, Ori Fisher, and Devon Austin, and they held their lead until Lakehill pulled one back in the 53rd minute to start their amazing second half comeback thanks to a brace from Craig Gorman and goals from Blair Sturrock and Keegan Lang.

Saturday got started with Bays Utd defeating Comox Valley 4-2 at Oak Bay High. Bays goals were by Kiyoshi Croke, Hatim El Azhari, and Patrick Nelson with a pair, while Comox had goals from Clay Hamp and Kyle Bate.

Next up was the stormy game at Finlayson that saw home team Vic West defeat Cowichan 3-1. Salem Almardy hit a double for Vic West, with Maslah Hassan Farah also on the scoresheet. The loan Cowichan goal was scored by Blaze Roberts.

Wrapping up Saturday night (and the weekend for the division) at Starlight Stadium was Nanaimo defeating Westcastle 2-1. Nanaimo’s Daragh Fitzgerald scored both of the goals for the travelling team, with Westcastle’s goal to open up the game scored by Alex Da Matta.

And after all of that action, the VISL Division 1 standings look as follows: 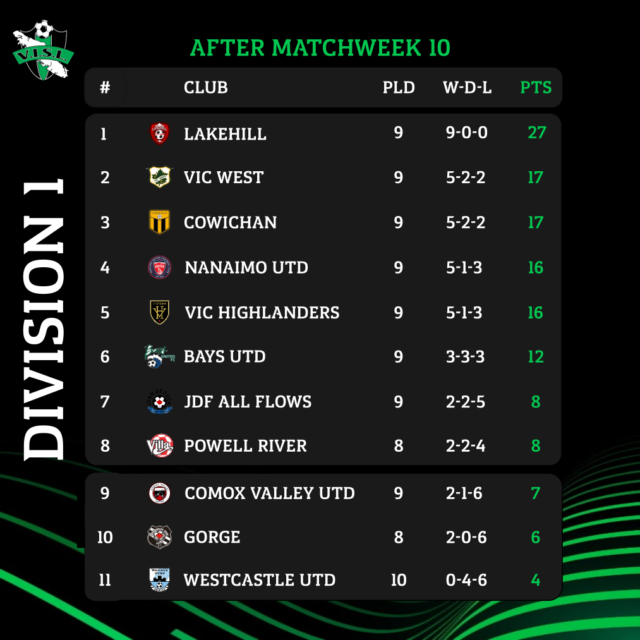 Lakehill somehow keeps their undefeated streak alive, and their deserved spot at the top of the division.

Vic West leapfrogs Cowichan and are sitting in second place by criteria points over Cowichan. Nanaimo survived a scare from Westcastle and settle in tied with Highlanders who were idle this weekend. Comox and Westcastle were unable to take advantage of idle Powell River and Gorge, and they remain in the bottom three, with Westcastle in the basement.

There were no shutouts on the weekend, so the Golden Gloves leaderboard does not change this week. Hardeep Gahunia of Lakehill still sits atop the heap of guys who guard their respective fortress.

Some key players showed up for their respective teams and were able to score some goals. The leaderboard has changed some, and Patrick Nelson of Bays Utd claims his leader role back. Here is what that Golden Boot race looks like – we all know it will change again in the near future. 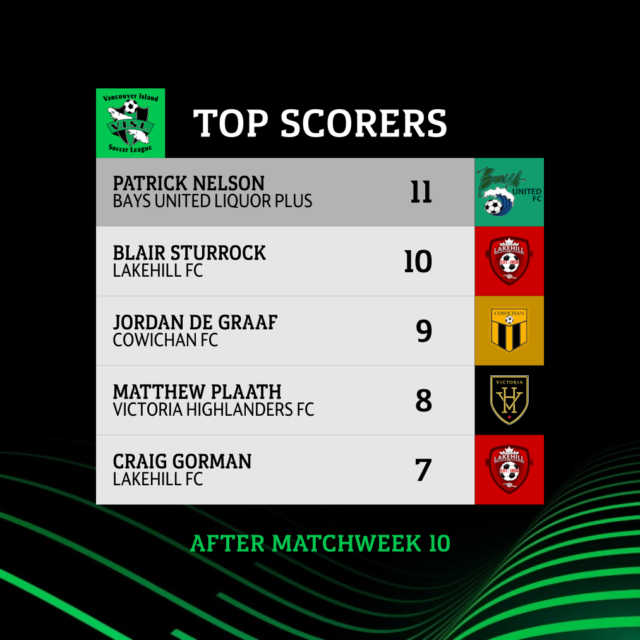 An amazing weekend of local amateur men’s soccer. No doubt coffee rooms and loading docks around the Island will have a few stories, with probably non players in amazement that local outdoor soccer was even played.

All part of the makeup. We are thankful that we did not have Edmonton like temperatures like our National Men’s team did on Friday when they defeated Costa Rica 1-0.

So fresh off two huge men’s national team victories, our top flight is excited to get into week 11, although unfortunately there are no snow piles to celebrate goals on.

As things have evolved with rain, some adjustments have been made to avoid the Malahat, so there has been some midweek adjustments to keep the ball rolling for as many teams as possible.

Here are the updated fixtures after the Malahat protocols, with some updates coming as recently as Thursday morning. 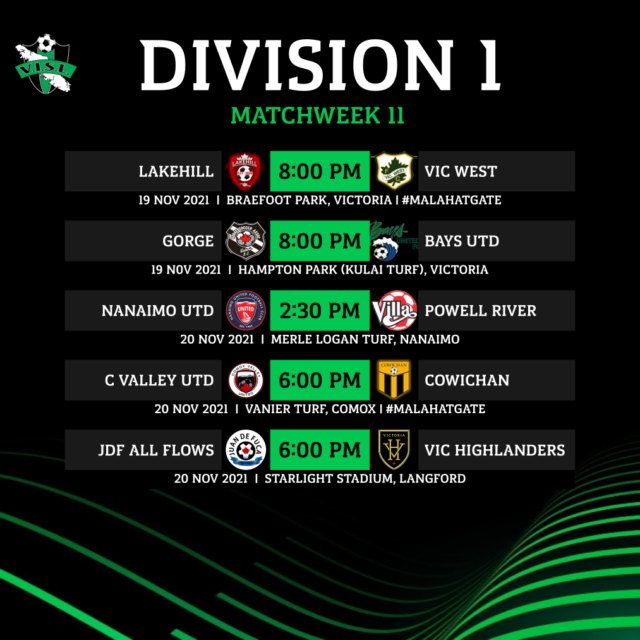 Everybody likes to beat the top dog, so the game at Braefoot will be exciting to take in. You sure feel like this is a huge turning point in season. Will Lakehill run away with the division? Will the storied Vic West team celebrating their 125th anniversary try to keep the dream alive of capturing another Garrison Cup?

Again, there are some big tests at the bottom of the table as to see who might make their way out of the dungeon. Westcastle will not be moving for the time being as they have the weekend off.

We encourage transit or bike riding (especially if taking advantage of bike lanes) to the games if possible – and watch out for gas station lineups coming out onto roadways! Thanks for supporting local grassroots soccer and people in your community.