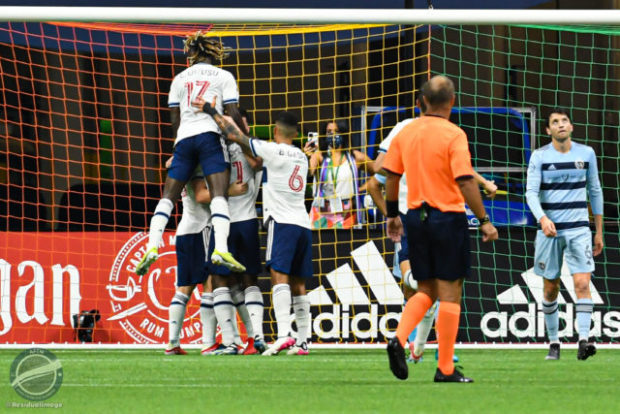 After three seasons spent floundering out of the playoff places, the Whitecaps are back in the postseason for the first time since 2017. This is the fifth time that the ‘Caps have made the MLS playoffs, and they have just one win in the previous four trips, a 5-0 trouncing of San Jose in the 2017 first round.

Success has not been easy to come by, to put it mildly. And this year won’t be any easier, as the ‘Caps are on the road for the first round – and will be on the road for any playoff matches they play unless both they and Real Salt Lake win this weekend. Well, if they face NYRB in the Final that would also be held in BC Place, but if we end up with that matchup there might be a weather warning from the large flock of pigs flying over the stadium.

So, the ‘Caps are faced with an away date with SKC, a team that has given them fits in recent years. Of course, the ‘Caps did beat them in October, a result that was a big piece of their late run to the playoffs. But playing in Kansas City is another story, and the ‘Caps will need to bring their A-game if they’re to win.

The squad should be confident though. Just one loss in their last eleven matches, punching a postseason ticket when the season looked potentially dead in the water back in the summer, that’s no mean feat. There’s the sense that they’re playing with house money at this point, and even though that wouldn’t make a potential loss on Saturday not painful, it’s nice watching a team that feels like they’re playing freely.

With regards to the line-up, I’d imagine it’ll be quite close to the one from the do-or-die match against Seattle on Decision Day. The one change I’d figure is Érik Godoy returning to the line-up, though the question would be whether he comes in for Jake Nerwinski or for Ranko Veselinović. On paper, leaving Nerwinski in at centre-back would seem the less logical option, but Vanni Sartini has not been shy when it comes to slotting more unexpected players into the XI, and he seems to see Nerwinski as more of a central defender than a right-back.

Regardless of which of those three make up the backline with Florian Jungwirth, the other eight players who were on the pitch against Seattle seems to be the best possible line-up.

Maxime Crépeau is obviously in goal. Bruno Gaspar has had his moments, but Javain Brown is better defensively (which will be quite important on Saturday), and Cristián Gutiérrez is a more natural fit on the left flank than either of them.

Russell Teibert and Leo Owusu have been the preferred duo in the middle of the park, putting Janio Bikel and Michael Baldisimo firmly on the bench. And without Nosa Igiebor swooping in to take some minutes this time, the path is clear for Teibert and Owusu to be given the shot to make their unlikely partnership work at this final stage.

Up front, while Déiber Caicedo is perhaps unlucky to find himself outside the starting line-up, it’s hard to argue with the trio of Cristian Dájome, Ryan Gauld, and Brian White remaining locked in. Dájome has been a workhorse for the ‘Caps this season, tactically flexible and willing to cover a ton of distance up and down the wings. Gauld and White have been the attacking stars of Sartini’s reign, and if the ‘Caps are to get a goal or two in Kansas it’s a good bet that at least one (and potentially both) of them will be involved. Looking at the hosts, SKC just missed out on the number one seed and a bye in the first round, losing 1-0 to RSL on Decision Day in a quite controversial match. Despite only missing the playoffs once in the last decade, SKC have had some postseason demons since they won MLS Cup in 2013, only making it out of the first round twice since then.

This two-week break before the beginning of the playoffs was a blessing for them, as they have dealt with a lot of injuries in the fall. Alan Pulido, Graham Zusi, Johnny Russell, Ilie Sanchez, Gadi Kinda, and Khiry Shelton have all been nursing various ailments. This helped contribute to SKC losing all three of their final matches of the regular season, sending them into the playoffs on backwards slide.

Despite this, this team is not going to be any sort of pushovers. SKC are a strong side, and the Whitecaps have their work cut out of them. Debates about what’s to come – from whether Sartini will get the permanent job to what the ‘Caps should do with Lucas Cavallini or what types of players they should target in the winter – can wait.

For now, I’m just happy that for the first time, I’m able to write a playoff preview for this site! Whatever happens on Saturday, this season is one that’s had an unexpectedly successful ending, and if the ‘Caps play like they have in recent weeks then they’ll have a real shot at making it through to the quarterfinals. Let’s see what happens!