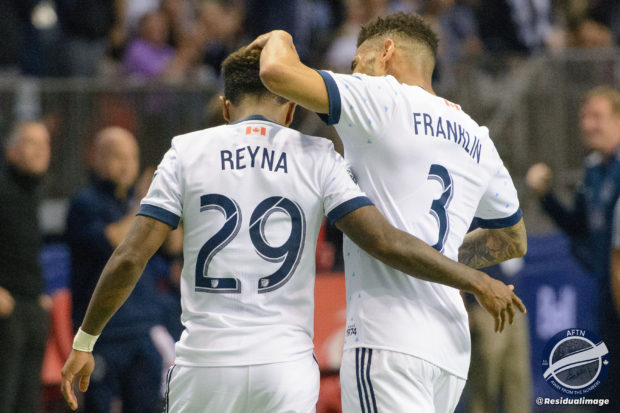 For the second time in less than a week Vancouver Whitecaps had to come from behind and settle for a draw at home despite having a number of opportunities to get all three points. The Whitecaps had 22 shots, with just two goals to show for them, as once again chances were created but not taken.

The Whitecaps would get goals from Cristian Techera and Yordy Reyna while the visitors got responses from Danny Hoesen and Nick Lima, as the ‘Caps and San Jose Earthquakes played out a less than inspiring 2-2 draw at BC Place on Wednesday evening.

Both sides had early chances in the opening five minutes with Reyna sending in a lob and Magnus Eriksson heading the ball wide of the net.

Brian Rowe made his first save of the night just after the 15 minute mark, catching a Danny Hoesen shot from outside the box.

A couple of minutes later the Whitecaps were able to get on the board first when Reyna was found a slashing Techera and the Uruguayan made no mistake slotting the ball past Quakes keeper Andrew Tarbell.

Techera puts the 'Caps up 1-0 AND keeps his jersey on. pic.twitter.com/ReKy9cmPLr

Tarbell did come up with a massive stop just before the half denying a Kendall Waston header, swatted the ball off the line, with a follow up shot from Efrain Juarez hitting the post.

It would prove costly during first half injury time, as Hoesen was able to beat the offside trap to get into the clear and chip the ball over Rowe for the equaliser. Initial thought was that the Dutchman was offside, but replays showed the striker’s excellent work on the play, with Waston playing him on as he got on to the through ball.

A familiar story of late for the Whitecaps, as their inability to take their chances cost them dear, with the Earthquakes finding the back of the net with their first shot on target.

The visitors carried over the momentum into the second when they took the lead eight minutes in. As had been the case a number of times in the first half, Lima found himself all alone on the right wing, cutting into the box and making no mistake firing the ball into the far top corner.

Reyna would square the match in the 64th minute getting free in the six yard area to head in a cross from Marcel de Jong, aided by some poor defending by former Whitecaps Shea Salinas, who turned his back on the ball as the cross came in.

The Peruvian broke free in the box again with six minutes remaining and almost put the ‘Caps ahead but was robbed by Tarbell closing his wickets in time to prevent the goal.

They have very little time to think about the dropped points as they travel into Texas to take on FC Dallas on Saturday. With the match set to be played in 37 degrees Celsius at kick off, you wonder if it will be a younger and much changed team that takes to the pitch. With points to be made up, I’m not sure the Whitecaps can afford that luxury right now.

“Déjà vu I think, wasn’t it. There was lots of good stuff. There was too many individual errors which led to goals, lack of concentration when we’re in control of a game, like Friday night. When you do that and you get punished, it stings, it hurts, and I think it was a case of that again tonight. But we continue to create chances, we just need to take them.”

On if he’s concerned with creating so many chances and not winning games:

“Listen, I’m glad you said it, because I sound like a broken record. Does it concern me? Yes. Am I worried? No, because we’ve just got to continue to do that and hopefully we’ll get a little bit of luck along the way. You talk about Kei today, he had two or three good headers, which nine times out of ten he scores, and he didn’t. Yordy [Reyna] could’ve got three goals. There’s lots of good stuff, but obviously we conceded two bad goals, which is more worrying for me.”

“Well seeing the way he played today will help us, because I thought he was terrific in his performance. He looked lively, he looked sharp, and he was in attacking areas which [he was] getting shots off and creating chances. Lots of positive stuff from Yordy. He could have got three goals on another day, as I said. But that’s what we need, we need Yordy to come up big for us at certain moments. I think just before he’d come off he had a key chance, where he was one-on-one with the keeper and the keeper pulled off a good save.”

On squad rotation on Saturday in Dallas:

“There will be a little bit because we have a few boys banged up, dealing with cramps towards the end of the game. They put a tremendous amount of work in today. A couple of boys have played two games in four or five days, so I’ll give one or two of them a break. I’ve got freshness in the squad, some of the young legs want to play and they’ll get the opportunity to play. There will be some changes, I won’t tinker with eight or nine changes, but there will be a couple.”

“Frustrated again. No more words. Frustrated because we wanted to win, to be honest.”

On salvaging a draw:

“Yes I know we could have lost, but I think that we had more chances and we didn’t score, and [on] the backline we didn’t have a clean sheet.”

On a lack of finishing:

“Both. Lack of finish, and lack of keeping our goals [against] zero.”

On how he feels about his performance:

“I felt good. I think we started pretty well in the game. For 43 minutes I think we controlled the game, we created a lot of chances, and we had the opportunity to score two or three goals. But we didn’t, and as is happening this year, one chance for the other team and they score a goal. That’s what happened first half. They came back second half with a lot of energy, they started really well and they scored a second goal. But I believe the team has got to keep confident, because in the beginning we weren’t creating, now we’re creating a lot of chances, just we need to capitalize.”

On not capitalizing on chances:

“We need to keep working on that. We can’t hide from that, because that’s a fact. Especially myself, I think we had a shot and I put it over the net. But we’re creating on set pieces, we’re creating on playing, we’re getting wide and creating chances in the box, it’s just the ball can’t go in. As is happening, we can score, not it seems like to win we have to score three or four goals. I think we need to work on keeping our shape, keeping to defend very well, and win 1-0.”

On two comebacks being a positive:

“That’s not right because we started 1-0. If we keep the clean sheet we win the game. I think it’s a little bit a lack of concentration in the last two minutes of the half. We need to play 95 minutes, 96 minutes, at the same level of concentration. And keep working so hard to defend our goal and try to put back balls in the net. I think that’s the key, but we can’t feel sorry for ourselves, we know what we are about and we know the situation we are in these past games. But guys, we’re getting to the middle of the season, but the importance is how we’re going to finish. We can’t be feeling sorry for ourselves.”

On the game in Dallas:

“If they wanted I would be playing right now, and give 100 per cent, 150 per cent to win a game. This is who we are. We’re never going to give up, it doesn’t matter if it’s a 100 degrees or zero degrees, we’re going to go there with the same mentality. Guys are going to come in fresh and put the same effort that we put tonight.”

On the turnaround from being winless in seven to taking four points on the road:

“In general I think there’s a fine line between winning and losing. We came out really poor this season for sure. It was really important we beat Minnesota last weekend and a really important point today. I think we deserve better but we need to still improve, but I think now we’re on the right track.”

On confidence from these two road game to kickstart their season:

“Of course. We’ve got four points out of six, that’s good, so let win against D.C. now.”

On not starting Wondolowski?

“It’s always hard to put that captain on the bench, but the most important thing is to organize the team the best now. It’s been two games in a row where we used him as a sub.”

“I think we must be humble at this point. It was an okay result.”

On the adjustment from coaching in Europe to MLS:

“Every game is so even, open games. The last 10 minutes of every game is like a battle. It’s really open to the last second.”

On the late save from Tarbell:

“I think Tarbell is a really solid goalkeeper. He’s been one of our best players so far in the season. I’m really pleased with him.”

On the team’s play:

“I think there were moments where we were really strong. We put them on their back foot. We did what we planned and broke their high pressing lines and we were able to go on some good rushes and get forward. I think there were a few times where we lacked a little creativity in the final third, myself included. I think overall we put out a good performance. We’re not out of it by any means. It was a good effort and I’m proud of this group.”

“I saw there was a lot of space between the defender and me and he kind of backed off and I like that. I got an opportunity and I took it, luckily it went it.”

On having space out wide:

“I like it when I get that space. It’s different to get that much space. Usually I’m pressed tightly, but when I have that space, I’m free to get after it. When I’m given that space, we have to take advantage of that, and we did at times.”

On four points from the two road games:

“It shows resilience from that squad, when we’re down we can pick ourselves up. We have to come together as a group and keep fighting. Now we go home and have an opportunity to get three points again. Guys are starting to pick their heads up. You can’t hang your head too low and you can’t hang your head too high. I think we’re learning that and it’s a long season. We’re in a real good spot.”