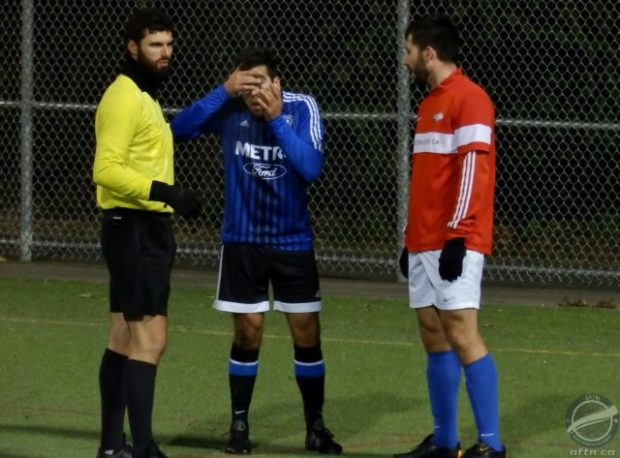 Week 13 of the Vancouver Metro Soccer League (VMSL) is in the books and it was another entertaining weekend of local football action that saw another twist in the title race and a lot of late drama in some of the matches.

By the end of it, three points separate the top four sides, with Rino’s Tigers and BCT Rovers Hurricanes the big winners as they closed the gap on leaders Croatia and leapfrogged the previous second placed West Van in the process, with both of those sides dropping points.

At the other end of the table FASA made things interesting in the relegation battle with a big win, bringing them to within three points of the team immediately above them and a further point back of another two teams in 8th and 9th.

The action got underway with the leaders, and defending VMSL Premier champs, Croatia SC at Burnaby Lake on Friday night. In form Coquitlam Metro Ford Wolves were the visitors, coming in on the back of four straight wins, and they made Croatia work hard for a point in a 1-1 draw. 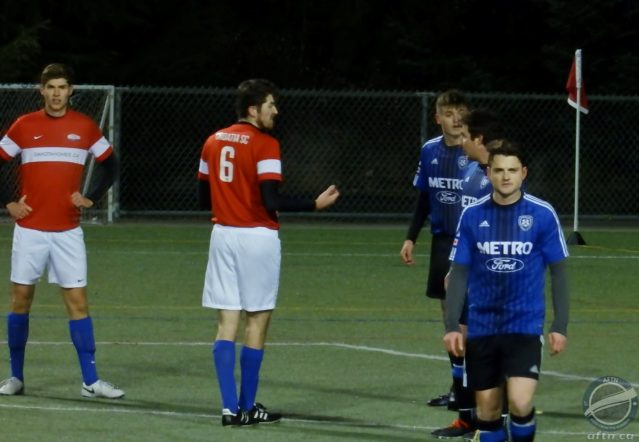 Both teams moved the ball around well in the early going but it was Metro Ford who were looking the more dangerous, rattling one off the bar from long range in the 22nd minute.

The Coquitlam side kept the pressure on and got their breakthrough in the 25th minute when an unmarked Lucas Krivak made a run into the box and hit a first time finish from a dangerous cross in from the left.

Croatia fought back and hit the bar themselves nine minutes before half time after a scramble in the box from a corner, but with no further goals Metro Ford took the narrow lead into the break.

Both teams had their chances to add to the scoreline in the second half, with the Coquitlam keeper coming up with a couple of big saves, but the leaders finally got the goal their play deserved when Daniel Davidson rose superbly to head home his seventh of the season in the 84th minute to make it 1-1.

That was how it finished come the final whistle, meaning what could be two crucial dropped points for the defending champs with things being so tight at the top.

You can see our highlights from the match on or You Tube channel and below.

BCT Rovers Hurricanes were the first team to take advantage of Croatia’s wobble, moving up to second in the standings and closing the gap at the top to just two points following a 2-0 win over bottom side ICSF Columbus, in a match that produced a flurry of late drama and cards.

It was a much closer game than the standings would have suggested with Cam Hundal firing the Surrey side ahead on the stroke of half time.

The second half saw five Columbus players booked for dissent. Three of those came in stoppage time, along with Alejandro Castelblanco getting a straight red for offensive language.

The cause of their ire was a penalty award to the Hurricanes, which Nick Soolsma duly dispatched to secure the victory and the three points, leaving Columbus still in search of their first win of the season.

West Van had the chance to close the gap to Croatia to just one point but more second half drama at Ambleside on Saturday afternoon saw them finish the weekend down in fourth.

Merlin Fisk fired the visiting NVFC Norvan ahead two minutes before the break in the battle of the north shore. That was how it stayed until eight minutes from time when Shane Howard levelled things up. But there was still a lot of late drama to come.

West Van keeper Stephen Welle was sent off in the 87th minute for denying a goalscoring opportunity and with all their subs used, their captain was forced to go in goal.

That wasn’t to stop the ten men though, who went ahead in stoppage time when Howard bagged his brace, but with three crucial points looking secured, Norvan tied things up when Yigal Bruk scored with the last kick of the game.

Those dropped points could prove very costly for West Van come the end of the season, but one team that was able to take advantage of Croatia dropping points were Rino’s Tigers, who came away with a narrow 1-0 win over CCB LFC United in the other Saturday afternoon match up.

This was an entertaining battle, between two very talented teams. In the end the difference was a Farivar Torabi goal.

The league’s Golden Boot leading scorer took his tally for the season to 15 with his 10th minute finish into the bottom corner. It was a well taken goal and although both teams launched wave after wave of attack, both defences held firm for the remainder of the game.

There were a couple of close calls, however, in the second half with Torabi having a second ruled out for offside and CCB crashing a free kick off the bar.

In the end the single goal was enough, moving Rino’s up to joint second in the standings with BCT Rovers Hurricanes and keeping CCB surprisingly down in the relegation dogfight.

You can see our highlights from the match on our You Tube channel and in the video below.

In the battle for Provincial Cup berths, SFC Pegasus came away with a keenly contested 3-2 victory over Club Inter EDC Burnaby at Newton Athletic Park on Friday night.

All the goals came in the second half with Burhan Waisy opening the scoring for Pegasus a minute after the restart. Liam Miller tied things up midway through the second half before a goal from Kerman Pannu in the 70th minute and a 79th minute effort from Yassin Essa clinched the points for the Horsemen. Colin Streckmann hit a last minute penalty for Inter, but it wasn’t enough to spark a dramatic late comeback.

The win consolidates Pegasus’ place in 5th but they may still fancy their chances of getting into the title race if they can string some wins together and those above them continue to drop points.

Another match that saw all the goal action come in the second half, Ramsey Alfantazi put FASA ahead four minutes before the hour mark. Mladen Ljumovic tied things up for the White Eagles in the 63rd minute, but Said Bedouhene grabbed a 75th minute winner for FASA to keep their hopes of avoiding the drop alive.

And all of those results sees the VMSL Premier Division standings looking as follows after the Week 13 action. 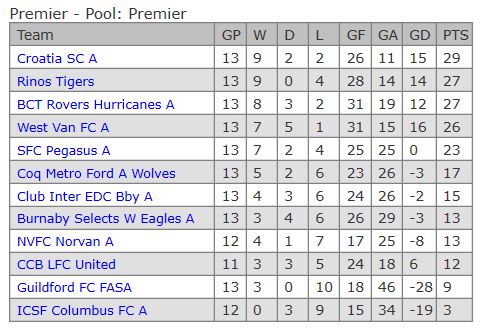