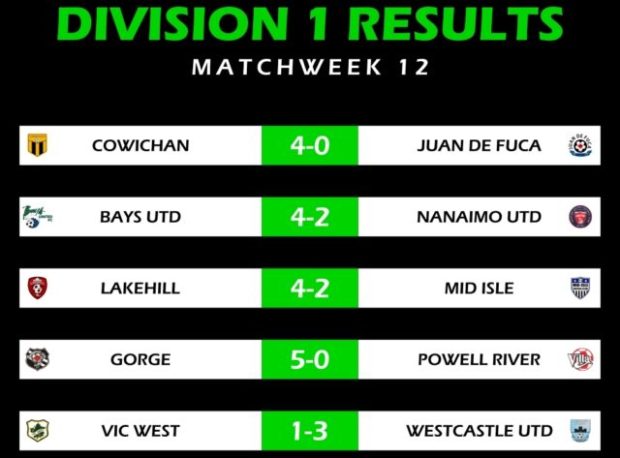 Week 12 of the top flight of Vancouver Island’s amateur soccer is complete and for the first time this year, Division 1 saw a weekend with the favourite teams winning.

Sure, there was a couple scares, but at the end of 90 minutes of play, the higher ranked team was victorious in all of the Vancouver Island Soccer League (VISL) Division 1 matches this past weekend.

Being dubbed as separation weekend, here is a snapshot of what took place.

Cowichan FC started Friday by blanking Division 1 newcomers Juan de Fuca All Flows 4-0. It was another clean sheet for Cowichan keeper Darian Achurch and scoring the goals for were Craig Gorman, Steven Zoric, and a brace from newcomer Grayson Chalifoux.

On a chilly Friday night at Westhills, Bays were able to sneak by Nanaimo 4-2 in a battle of the Uniteds. Patrick Nelson, Matteo Ventura, Jose Sagaste, and Adam Ravenhill were on the scoresheet for Bays, with Caleb Nwameme, and Colin Jacques finding the net for Nanaimo.

Saturday saw Gorge FC put their undefeated record on the line against Powell River Villa, and they blanked them 5-0 thanks to goals from five individual scorers – Zakaria Bougraine, Arbnor Jusufi, Nils Webber, Brennen McCleary, and Martin Trapero. Earning the shutout for Gorge, in just his second game with the team, was permitted youth player Levi Verch.

The final game of the weekend also had the undefeated Westcastle squad in action, as they defeated Vic West 3-1. Keenen Colley, Elliot Cuthbert, and Goteh Ntignee got Westcastle’s goals, with the lone Vic West marker scored by Salem Almardy.

So after those matches, here are the current standings. 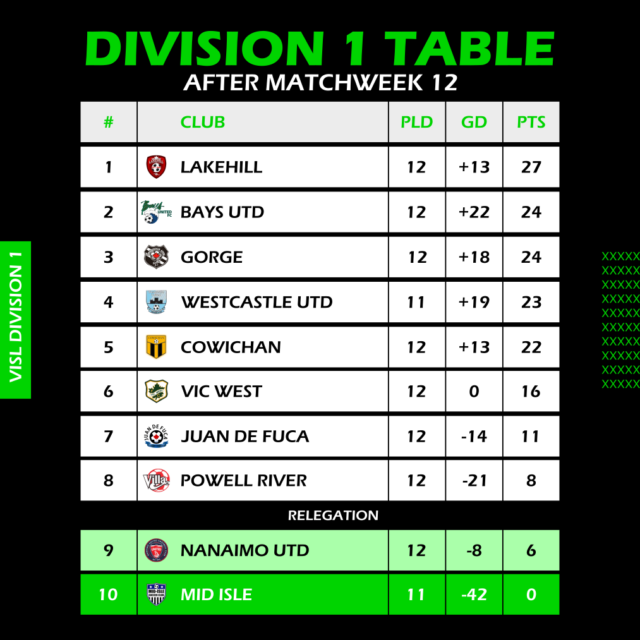 Separation was the key word this weekend and the top five did in fact separate from the bottom five.

The five leading sides all took maximum points, with the only main changes at the bottom coming with some teams having their goal differential inflated a bit.

Several players had good individual efforts this past weekend, and here is how the goal scoring leaderboard looks after 12 weeks. 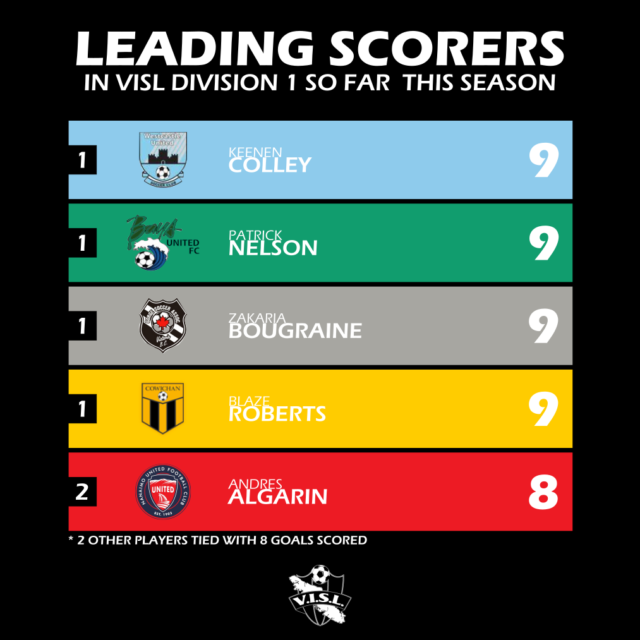 There’s a logjam in the race for the VISL Golden Boot with four different players sitting on 9 goals, and a further three players one back on 8 goals.

There’s also a newer stat this season – goalkeepers and their shutouts.

Here is the clean sheet situation after Week 12’s action. 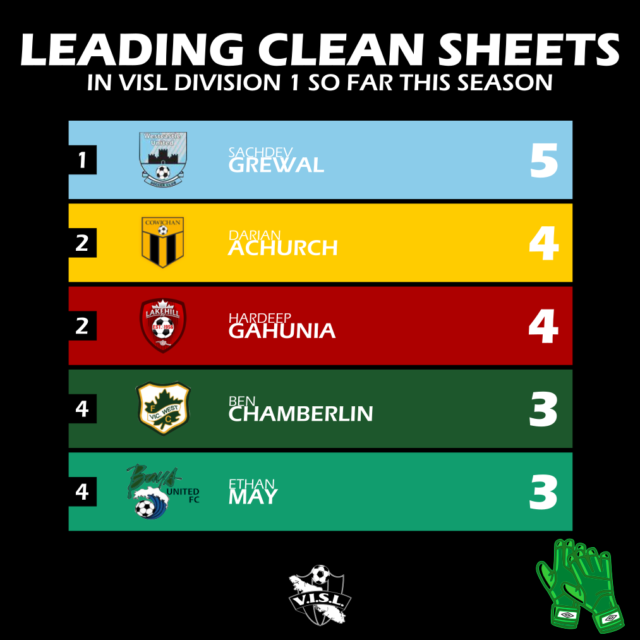 This was the VISL’s first “standard” result weekend of the season and definitely sets up next weekend’s matches – especially as both undefeated teams meet up. Who is it going to be unlucky 13 for?

It could be a weekend that shatters dreams, or gets teams one step closer to achieving success.

Here is what the top flight has in store for this coming weekend, with all fixtures taking place on Saturday night. 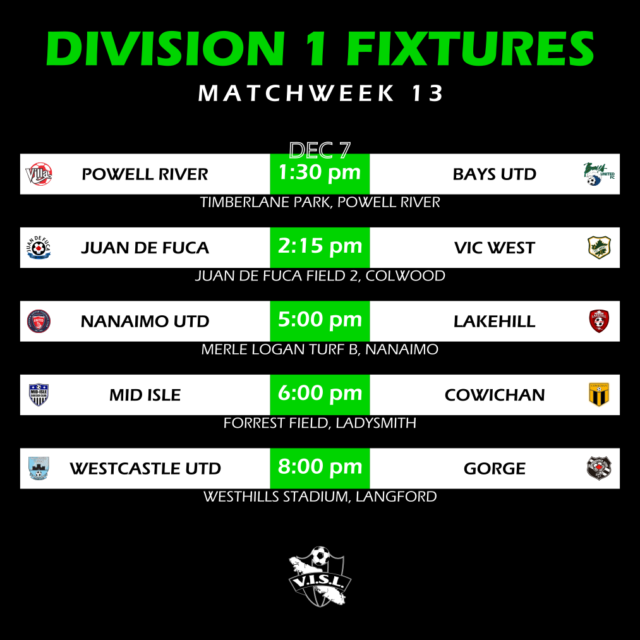 Out of the gate is a match at Timberlane Park as Powell River Villa host Bays United. As noted by many teams this year, travel is always a factor, and Powell River will look to take advantage of that as they have their community to support them in a tough match. They will need a special effort to get past the squad from the Municipality of Oak Bay, while the South Island Boys will need to make sure they do not take a game off.

Saturday will also see a rare match right next to the Q Center, and on grass, as Juan De Fuca Al Flows hosts Vic West. JDF will look for a win so they can have some breathing room from the relegation zone. Vic West will look to get back on the winning side of things to close out 2019.

As the evening time rolls around, it will be the battle of the Reds as Nanaimo United host Lakehill at Merle Logan turf field. Leaders Lakehill will look to stay in first place and build their buffer zone as teams are coming after them. As for Nanaimo, can they get out of the relegation zone and turn around their dismal year? You would think they can and should be much higher in the standings.

Also in the mid-island area, the struggling Mid Isle Mariners will be hosting their rivals Cowichan FC. Mid Isle are in dead last and will look to squash Cowichan’s hopes in achieving their record tying 6th Garrison Cup in a row. The squad from Duncan will look to build on their solid effort last weekend.

Then, to wrap up our weekend, it is the Game Of The Week as Westcastle United will host Gorge FC in a battle of undefeated teams on Saturday night at Westhills. 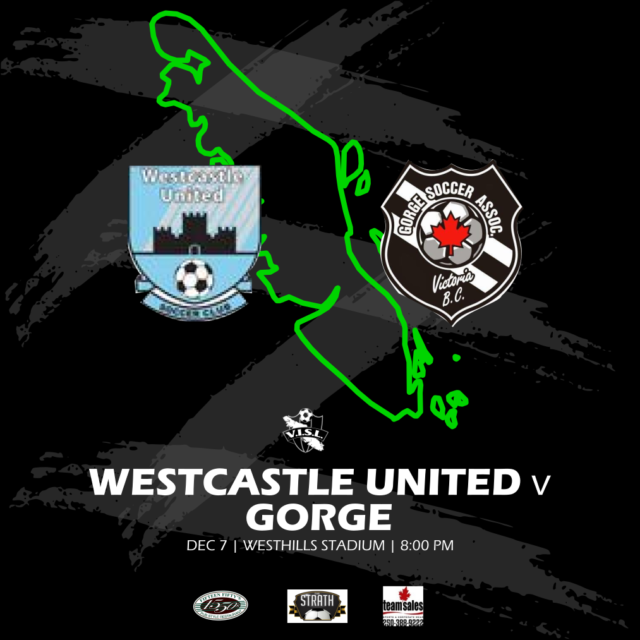 This match could go so many different ways, but we know the result will play a HUGE roll in what happens for the rest of the divisional standings.

Both teams are coming off wins and that is the only thing that will certainly not be the case after this weekend is all said and done. Christmas may come early for one of these teams.

A good weekend is in store to see some local soccer action. Bundle up, and hope to see you supporting your local friends, family, and soccer players.