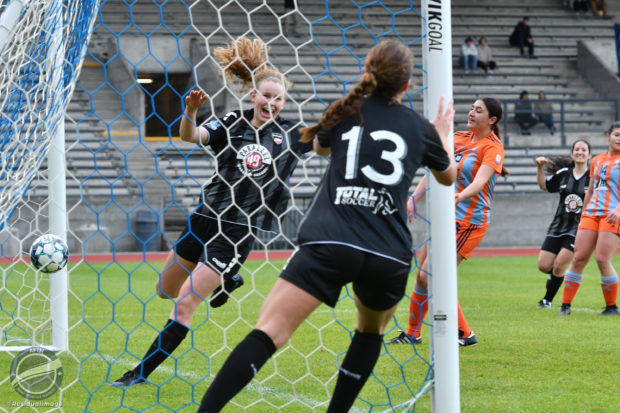 [For the basis of this round-up, we’ll be looking at matches played from Friday June 3rd to Tuesday June 7th]

With five of the seven sides having reached the third way point of their inaugural League1 BC season, there’s a clear split developing between the top three teams in the women’s division battling to make August’s championship game and the chasing pack.

There’s still a lot of football to be played, but Vancouver Whitecaps, Varsity FC, and TSS Rovers are all looking like the cream of the crop so far, with the first two sides also posting 100% records in the process. They’ve all still to play each other twice, with the ‘Caps and TSS meeting for the first time this coming weekend, so things could still yet be shaken up, but they are certainly looking like the trio to beat right now.

The Week 3 action kicked off at Swangard Stadium on Friday night, with TSS Rovers in rampant form against Rivers FC, putting in a clinical performance as they came away with a 7-2 victory. 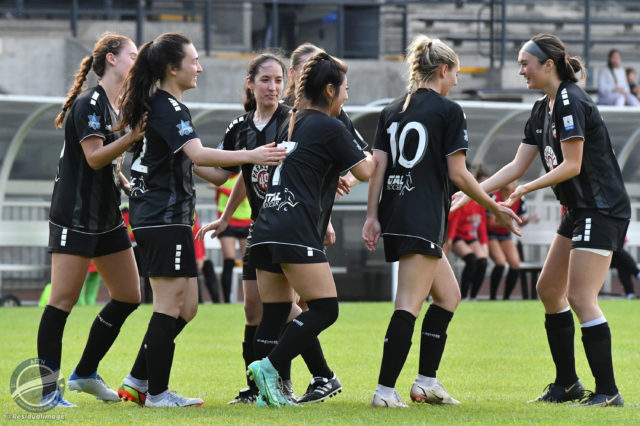 It was one way traffic for the bulk of this one after Raya Athwal put TSS in front 25 minutes in. Unfortunately for her and the Rovers, Athwal got injured in the process and had to be replaced by Kathleen Aitchison. Unfortunately for Rivers, her replacement was to prove to be an even bigger goalscoring threat.

Aitchison doubled TSS’ lead in the 34th minute with a nice finish before Aislin Streicek made it three just two minutes later with a stunning 25 yard strike to send the Rovers in very comfortable at the half.

Then it all started to fall apart for Rivers. Claire Yee headed home a fourth five minutes after the restart, before Aitchison hit two in two minutes on the hour mark to make it 6-0 and you were starting to fear what the final score may be.

To their immense credit, the visitors had a chat, regrouped and pulled a couple back through Emily Clark in the 67th minute and then Camryn Curts four minutes later. There was still time for TSS to add to their tally though and a long-ranger from Ye six minutes from time rounded off the scoring.

You can see our photos of the match on our Flickr page.

A deadly display in front of goal, as TSS start to look like they’re hitting their stride, naturally delighting head coach Chelsey Hannesson.

“It’s a unique group where there’s a lot of chemistry that’s been built in a short timeline,” Hanneson told AFTN after the match. “That first 10 minutes, it was interesting to see the group try and figure it out, then after that it seemed like they settled down, committed to our gameplan and they really started to execute. The scoreline shows it. The chemistry was starting to show and everything was coming together.”

It wasn’t just the goals that pleased Hannesson, but the build up play that led to them, and she credited the role that some of the older heads have brought to her side.

“Kudos to our veteran players,” Hanneson added. “We’ve got Kat Aitchison, who scored three goals, and she’s putting herself into a position that’s quite new to her and she owned it. She really has grasped that role really well and has played to her strengths.

“We’ve got another veteran, Katie Bishop, who’s a playmaker and she’s setting up a lot of the plays that are happening, so between the two of them, the chemistry is there but also the experience and that was kind of the door opening for those goals in the middle part of the game.”

It was a dream game for Aitchison, writing her name into the history books by scoring the first women’s hat-trick in the league.

“We’re starting to really gel as a group more,” Aitchison told AFTN after the match. “The more we play together, the more chemistry will grow and the more success we’ll have. In general it was a really strong performance from the team tonight.

Buoyed by that victory, TSS headed out to Langley on Sunday afternoon to try and get revenge for the only team to beat them so far this season, Unity FC. 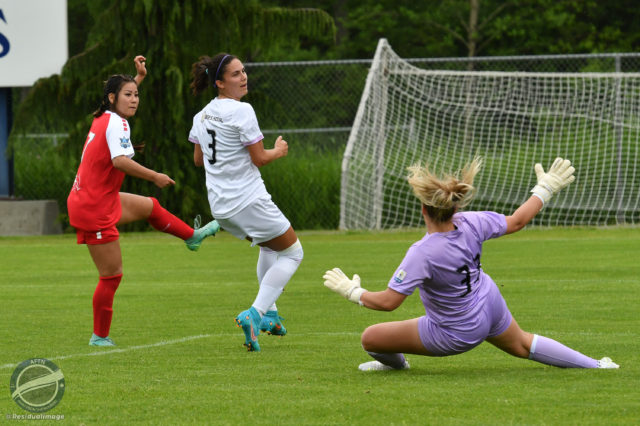 Unity came away 2-1 winners in the season opening game for both sides, but the Rovers got their revenge with a win by the same scoreline in their second encounter.

Claire Ye continued her fine goalscoring form to give TSS a half time lead with a 35th minute goal that she blasted home.

Katie Bishop tucked away a 67th minute penalty to put the Rovers two up, and although Charis Wardope pulled one back for Unity with 13 minutes remaining, TSS saw out the remaining time and claimed another huge three points.

You can see our photos of the match on our Flickr page and in the slideshow below. 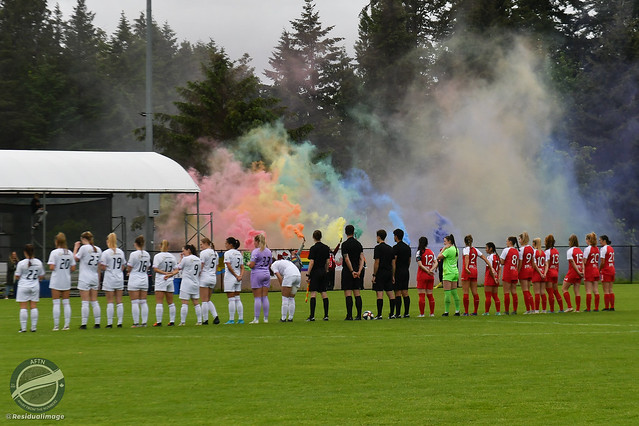 The victory made it three straight wins for the Rovers, moving them to second in the standings with four of their 12 matches played.

It’s a short season with little room for error and early points on the board could prove crucial. TSS have started strong and head coach Hannesson and her young squad are certainly enjoying L1BC so far.

“It’s probably one of the best experiences that we could be doing just now for women’s soccer,” Hannesson told us. “It’s interesting to get a dynamic of talented women together in a short window, but the good thing is that these women are here to compete, they’re here to play, and it’s just so fun to get them all rolling.

“The season, we’re going to blink, we’re going to miss it, but honestly, while we’re here enjoying the moment, we’re taking it one game at a time and just watching them put on a show and really showcase themselves.”

The Rovers rolling now sets up a mouthwatering match on Sunday when they travel to Ken Woods Field up at UBC to take on an unbeaten Vancouver Whitecaps side in a top of the table clash.

The Whitecaps made it four wins out of four on Sunday when they travelled to Victoria and made it a season double against Highlanders FC with a comfortable 3-0 victory, which Rituro recaps for us below.

If there were any doubts as to the dominance the Vancouver Whitecaps women are poised to inflict on the entirety of the 2022 League1 BC season, a 3-0 road victory to spoil the home opener of the Victoria Highlanders should put that doubt to rest.

While the gap in quality between the two sides has closed significantly since the Whitecaps laid down a 5-1 marker in the season opener, the Highlanders still looked second-best at a rainy Centennial Stadium at the University of Victoria.

Anna Hauer opened the scoring in the 35th minute for the ‘Caps with a silky smooth first-time right footed finish under the arm of Highlanders goalkeeper Jessica Gardiner. After Jaime Perrault made a nifty run into the penalty area by slipping past Olivia Swinton at fullback, Hauer had time and space to pick her shot, with the Highlanders defence spread too far apart to provide any meaningful disruption.

The sides traded possession for the rest of the half, though Bella Lister was rarely given a serious challenge in the Whitecaps goal. In fact, Lister wouldn’t be called into action until well into the latter moments of the game, reacting sharply to deny Highlanders attackers Paige Payne and Kiara Kilbey.

In the second half two quick strikes cemented the visitors’ grip on all three points. First, it was Hauer turning provider as she collected a lovely through ball from substitute Jeneva Hernandez Gray, ringing it off the post past an outstretched Madeline Astridge — Victoria’s second goalkeeper, subbed in at the start of the half — and directly into the path of an onrushing Ashley Roberts, who duly finished her fourth goal in as many games.

Ashley Roberts slots in the rebound to make it TWO! #L1BC pic.twitter.com/SXGe44wDdH

Then, not two minutes later, substitute Olivia Ahern lofted a high ball into the area and Clare Logan, wearing the captain’s armband, chested the ball down awkwardly yet accurately, beating Astridge in close and triggering a joyous leap in celebration from the centreback.

Even with the scoreline well in their favour, the ‘Caps never let up, led in no small part by Perrault. While Hauer had the larger contribution on the scoreline, Perrault had arguably a player of the match performance, making life miserable for Swinton and Amy Lawrence, the Highlander left fullbacks, out wide and in close. Any time Perrault had the ball at her feet, you couldn’t help but hold your breath and wait for the next bit of magic to happen.

For the home side, it may seem somewhat counter-intuitive to praise the goalkeeper that let in two goals, yet there’s a strong argument to be made that the scoreline would have been ever nastier for the hosts had Astridge not used her size on multiple occasions to snuff out near-chances or make timely saves inside her penalty area.

The Whitecaps aren’t the only team with a 100% record though. So are Varsity FC, who have played a game less but made it three wins out of three with a pair of victories on Saturday and Tuesday, to move them into third place in the table and three points behind the Whitecaps.

Varsity’s six point haul began with a hard fought victory against Highlanders FC at Thunderbird Stadium on Saturday afternoon, where they had to come from behind to get the job done.

Emma Regan had put Varsity ahead 11 minutes in with a cracking free kick, but despite their dominance they weren’t able to add to their tally and were stunned when Kiara Kilby struck twice in a three minute spell in the 24th and 27th minutes to put the visitors into a surprise lead.

The home side came storming back, however, and Katalin Tolnai levelled things up in the 38th minute before Sophie Damian scored an absolute beauty to put Varsity back ahead and it was a lead they weren’t to give up.

You expected Varsity to go on and add to their tally in the second half but the Highlanders held firm and they had to settle for the 3-2 win and an important three points.

There was little rest for Varsity though and they were back on the pitch on Tuesday evening when Altitude headed through to UBC for a match-up on the makeshift Dhillon Field.

Varsity dominated the play in this one but found it hard to break down a rugged Altitude defence and despite their pressure, they only had a 31st minute goal from Danielle Steer to show for their efforts. 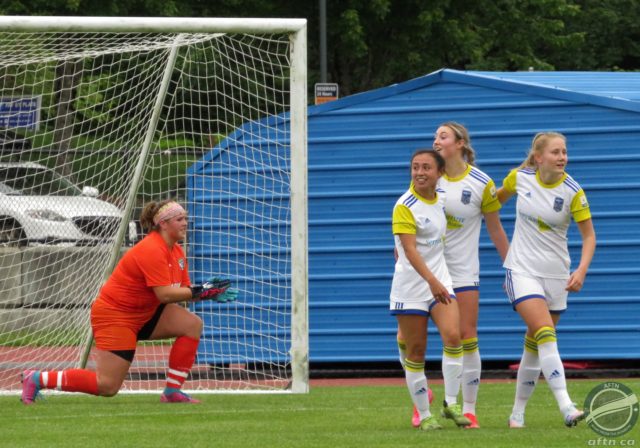 The second half was played in much the same vein but Varsity had to wait until the 78th minute to double their lead when Sophia Ferreira headed home a corner. Steer then sealed the deal with her second of the game in stoppage time to give the home side a 3-0 victory and their second clean sheet of the season.

The other women’s game in week three took place at Kinsmen Field in North Vancouver on Sunday as Altitude hosted Rivers FC.

Both sides had to settle for a point in this one, with Samantha Kell putting the home side ahead from the spot seven minutes in, but a Tess Vande Vegte own goal just past the half hour mark rounded off the scoring in this one and the teams left with a 1-1 draw.