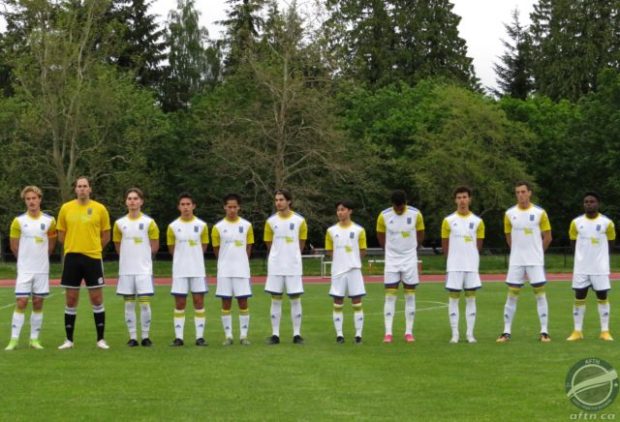 [For the basis of this round-up, we’ll be looking at matches played from Friday June 3rd to Tuesday June 7th]

With most of the teams a third of the way through their inaugural League1 BC seasons, the last week’s results have seen the men’s division continue to be wide open, with five teams no doubt all fancying their chances of making it to August’s championship game.

Leading the way are Varsity FC, who sit atop the table after three wins out of three to kick off their season, including a six point haul and two clean sheets in week three.

Varsity played their home opener at Thunderbird Stadium on Saturday afternoon, coming away with a comfortable 3-0 win over Highlanders FC, where they were dominant throughout.

Caleb Clarke had put Varsity into a 32nd minute lead with a nice turn and finish from close range, but they had to wait until late on to seal the three points with Nick Fussell finally making it 2-0 in the 79th minute and Bradley Richardson nipping in to round the keeper and fire home a third with six minutes remaining.

Varsity were back in action on Tuesday evening, and with Thunderbird Stadium unavailable, Dhillon Field was the makeshift venue for their match-up with Altitude FC, with a large and loud contingent making the trip through from the north shore.

In an entertaining end-to-end encounter, it took a 77th minute goal from substitute Logan Chung to give Varsity a narrow 1-0 win. A tough one for Altitude, who had played so well but without the vital offensive output to get on the scoresheet.

Those two victories see Varsity sitting top of the standings with a perfect nine points from their first three matches, one point ahead of second placed TSS Rovers, who also head into week four with an undefeated record.

The Rovers may come to rue the two points they dropped on a wet Friday evening at Swangard Stadium against Rivers FC. 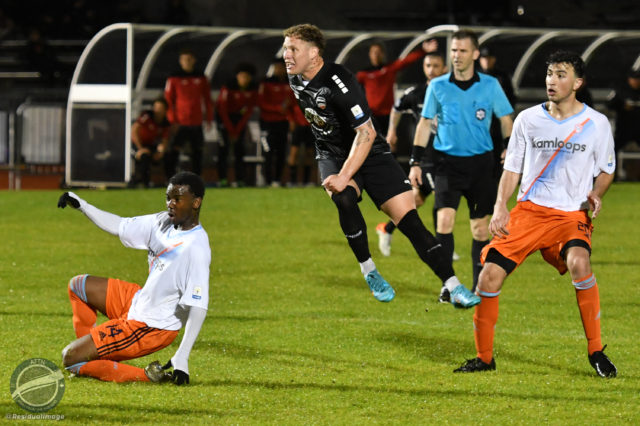 Despite dominating the match, TSS just couldn’t find a way past an inspired Jackson Gardner in the Rivers goal and while on another day they may have come away with a four or five goal victory, they had to settle for a share of the spoils instead in a 0-0 draw.

You can see our photos from the match on our Flickr page.

A disappointing and frustrating night at the office for TSS, especially coming on the back of their 4-0 victory at Rivers just five days previously.

Surprisingly, TSS didn’t make any subs to try and change things up, but Cromack revealed that that was firmly with an eye on the next game that was coming up on Sunday afternoon.

“Look, this is our hard week,” Cromack said. “We’ve done this before in USL where you go 30 hours [between games]. As we got to 70, 75 minutes the guys had good energy and were getting all the chances. We certainly weren’t threatened, with no disrespect to the other club, but when you’re camped out in their half a little bit I noticed our centre backs were feeling pretty good, so we just gave it a whirl and kept some fresh legs for Unity.” 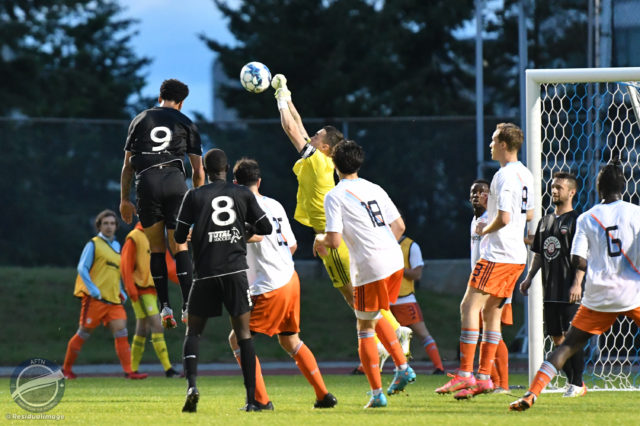 With their next match less than 48 hours later, TSS rang the changes for their Sunday afternoon clash with Unity FC in Langley, and it paid off in a well deserved, but hard fought, 3-2 victory.

John Joseph put TSS ahead 12 minutes in, burying a rebound for his first of the season, and Daniel Davidson doubled the Rovers’ lead from the spot in the 31st minute.

Davidson made things more comfortable with his second and TSS’ third just past the hour mark, but Unity made the Rovers sweat for their three points with a storming late comeback that saw them pull one back through a Thomas Powell penalty in the 74th minute and a late Owen McBride own goal.

They couldn’t find the equaliser though and TSS made it a four point weekend with a big away win.

That victory moved TSS a point ahead of the team they will now face this coming Sunday, Vancouver Whitecaps, who went down to their first defeat of the season, a 4-0 loss in Victoria against the Highlanders. Rituro gives us a recap of how that one played out.

Coming into their home debut on Sunday, the Victoria Highlanders men’s side had managed all of two goals in their first two games, both coming in the season opener against the Vancouver Whitecaps. On Saturday, the Highlanders were blanked 3-0 by Varsity FC.

One ferry ride later, it turns out the men had left their shooting boots at home. The Highlanders both notched their first win and handed the Whitecaps their first loss of the inaugural League1 BC season with a commanding 4-0 victory in front of a boisterous (and slightly soggy) crowd at the University of Victoria’s Centennial Stadium.

You would’ve been forgiven if you predicted the opposite was to happen, based on the opening minutes of the game. The visiting Whitecaps came out strong, with midfielder Alesandro Comita testing Highlanders goalkeeper Trevor Schneider early with a stinging strike that forced a two-handed save. This signalled the start of a flurry of activity in the attacking third for the ‘Caps, the majority of which revolved around Comita’s buzzsaw-like tenacity.

Then, seemingly out of nowhere, the tide changed and it was the home side in the ascendancy, with midfielders Javier Sagaste and Kody Greaves setting the tone while Kensho Ando kept the back four safe with incisive defensive work. This perseverance paid off in the 20th minute with a strong individual effort from UVic alumnus Isaac Koch, who intercepted a slow pass from the backline with a burst of speed before cutting across the face of the penalty area and curling a sweet left-footer past Whitecaps goalkeeper Harrison Gough.

If it wasn’t immediately clear that the home side were playing for keeps in this Salish Sea match, that point was emphasized not two minutes later on a corner kick. Koch played a short ball to Greaves, who floated in a cross to the six-yard box. One fortuitous bounce later, centreback Armaan Nijjar found himself with the ball at his feet and, just like that, it’s 2-0.

The Highlanders didn’t let their feet off the gas at this point, though the Whitecaps were determined not to give up a third and began hitting back on the counter-attack, spurred in no small part by the creativity of forward Tomás Peña, a reliable midfield presence in Brennen Fuerst, and a seemingly unending well of energy from forward Gurman Sangha, who can consider himself unlucky to have not been rewarded with a goal for his efforts.

Instead, it was Highlanders attackers Hussein Behery who found the back of the net in stoppage time at the end of the first half. Michael Henman, playing a physical role as a bruising target forward for the Highlanders, took a run at Victor Akoum and found himself with enough space to centre the ball to the top of the penalty area. Behery caught the ball full on the bounce with his right foot, sending the shot past Gough to the far post for the 3-0 goal.

Henman would play provider again in the second half, in a sense, as a charging run into the area in the 66th minute ended in a tangle of legs and bodies. Despite protests from Whitecaps defenders, the referee whistled for a penalty kick. Up stepped centreback Cody Gysbers, who sent Gough the wrong way to give the Highlanders a 4-0 lead they would not relinquish.

That said, the Whitecaps came oh-so-close on multiple occasions as they fought to leave Vancouver Island with at least a consolation goal. Substitutes Asvin Chauhan and Juliano Campedelli were electric upon their introduction into the game and, were it not for the seemingly charmed goal frame behind Schneider which saw a trio of shots bounce rattle the posts, the visitors could easily have potted one or two before the final whistle.

In particular, one of the final sequences of the match saw Chauhan and Campedelli link up to serve substitute forward Yayo Mutombo a great ball which he headed directly on target, only for Schneider to deny him with a massive one-armed save.

Incase you missed it, our Highlanders men won 4-0 against the Caps U19’s in their first home game of the @League1BC season!

Have a look at all the goals here, and check out our website for the full match recap of both the men’s and women’s games!
.
.
.#VHFC #HighlandersFC pic.twitter.com/znjRigW0ek

That victory for the Highlanders brought them right back into the mix with a game in hand against the leaders Varsity FC, who they now sit five points behind.

Rivers were rarely an attacking threat on the Friday evening against TSS, but this was a much more aggressive team that took to the pitch less than 48 hours later, taking the game to Altitude from the start. 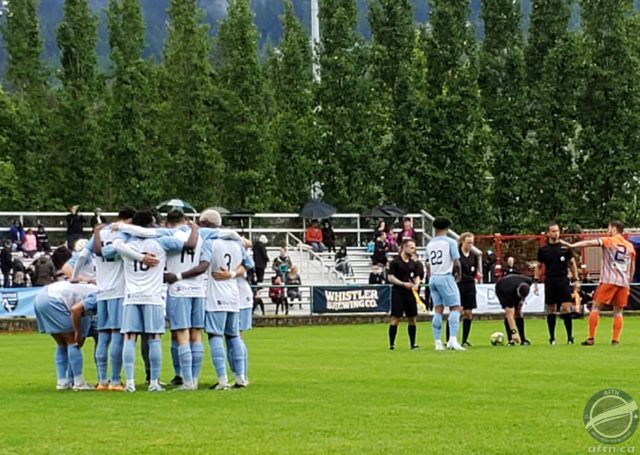 And it paid off with a 2-0 victory. Daniel Sagno, who had been a left back on the Friday but a left winger on the Sunday, put Rivers ahead in the 35th minute, running in on goal after being sent clear, rounding keeper Aidan Bain, and slotting home the opener.

Rivers then sealed the deal in the 57th minute, when the impressive Abd-El-Aziz Yousef fired home from the spot.