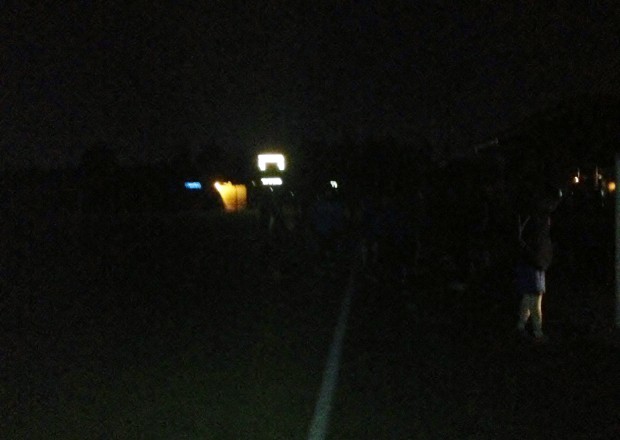 In a rematch of last season’s B Cup semi final the Richmond All Blacks attempted to avenge their loss to the Surrey FC Coyotes.

With the game tied at one apiece, and with just 20 seconds of extra time remaining, the lights were turned off prematurely and the game was abandoned before the penalty shoot-out could take place.

Unlike last week’s floodlight fiasco in Port Moody, the lights were not meant to be turned off until 10.45pm, which would have been enough time for the 8pm kick off to come to a climax, but something went wrong somewhere along the lines.

It was the Coyotes who pressed early as Navlesh Muldir’s attempt from outside the box curled just over the bar. That attempt was followed up by Leroy Kusina, whose shot was heading for inside the post but a diving fingertips save by the keeper kept the game scoreless.

The All Blacks countered and had a chance when a long thrown in found Ryan Dash but Chris Singh came up big to deflect the ball over the endline. The subsequent corner would give Richmond the lead, as the ball was knocked around in the box until Aman Dhaliwal was able to get to it poking it past Singh for the lead.

A free kick attempt from captain Terry Oujla almost brought the Coyotes back level but once again the Richmond keeper kept the ball out.

Moments later, however, Kusina collected the ball to the right of the net and crossed the ball along the deck, evading defenders until it got to Oujla who just tapped it in for the equalizer.

Just before the half was over, Surrey FC almost gained the lead when Mudliar split a couple of defenders only to see his shot go wide.

There were limited chances in the second half as most of the play was contested in the midfield with neither team scoring. The Richmond’s side best chance in the half came when John Chou’s shot from about 25 yards went just over the bar.

The home side had an opportunity to win the game as a cross found a free Oujla in the box but he was unable to connect with the ball sending it wide of the net. He followed that up with an attempt from distance that was smothered by the keeper and the game headed into extra time.

Surrey’s Ryan Lal came the closest to winning it in extra time. He was able to beat the defenders for a 1v1 on the keeper but could not round him for a shot on net.

Both the Coyotes and All Blacks were on tired legs and their attempts on goal were unable to get on target and it looked like the semi final was heading to penalties.

Unfortunately that’s where the game took a bizarre turn as the lights at Newton Athletic Park went out about 25 minutes before the scheduled time of 10.45pm.

The coach of Surrey FC attempted to get them back on but the match was called off five minutes before the lights finally returned.

The match will now likely be replayed at Minoru Park midweek with a time and date yet to be determined by BC Soccer.

With the game so close to finishing the extra time period, in many ways a full replay is a much better proposition than the lottery of a penalty shoot-out anyway.

The winner of the replayed game will face a semi final trip to the island next weekend to take on VISL Division 3B Champions Comox Valley United, who hammered FVSL side Port Moody SC Blues 4-0 in the other Keith Millar B Cup quarter final on Sunday.

The other semi final sees Langley FC Dynamo of the FVSL play hosts to VMSL side Sarajevo FC.