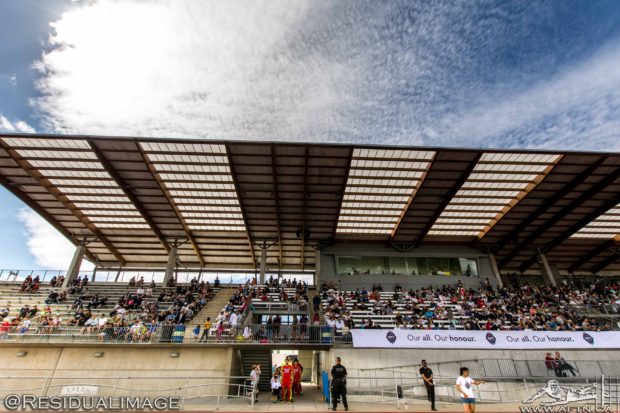 That village had a number of small local shops and businesses, including my favourite chip shop, which was open till 4am and was my regular haunt on my way back from gigs and shows I’d been to in Edinburgh and Glasgow. But most of the residents did their shopping and spending in one of the two large towns next door.

The village had a gas station. An independent one that charged exorbitant prices compared to the multinationals dotted all round about it. Unsurprisingly, people didn’t go to that gas station, choosing to fill up elsewhere. Then a sign appeared on it one day saying “use us or lose us”. People still didn’t. It’s not there any more. Is it missed? No doubt by some. Was its value fully understood? Probably not.

That gas station feels a lot like WFC2 right now.

It’s kind of a shitty analogy I know, but basically, Whitecaps fans need to come out and support WFC2 or there is a risk that the team could be lost to fans in the lower mainland.

This offseason we received a message with an interesting tidbit of a rumour. We were told there was a group in Calgary interested in buying the rights to WFC2 and moving the group there. No-one would go officially on record to talk about it or confirm whether there had been talks, any interest, whether a deal had been close, nothing really because a possible deal we were told “was still on the table”.

We’d heard it was close, with various reasons as to why it hadn’t happened, ranging from how much the ‘Caps were looking for to the group being told to wait until they’d heard what the Canadian PL proposals were before making up their minds. We were also told that never say never.

All bollocks? Some elements of truth to it? Just another baseless rumour? Or were people just shit stirring or feeling folk out? Either way, it’s time to get to the crux of the matter – WFC2 needs your support.

The Whitecaps USL side is one of the most important parts of the entire club. One that feels undervalued and underappreciated by the fans, the media, and sometimes it feels the ‘Caps themselves.

It’s a testing ground for young talent to see if they have what it takes to move to the next level of the pro game. It’s a previous missing link for Residency alumni to continue their development. It’s a side where first team players can get vital experience, playing time, and recuperate from injuries.

WFC2 had a far more successful 2016 season than the first team, starting the season with a ten match unbeaten run and going on to lose in the Western Conference final.

Yet still fans didn’t come out to support them in numbers or to see the (bright) future of the club. It’s all very disappointing and if the Vancouver and lower mainland public don’t want to support the team, could you really blame the ‘Caps if they moved the team to somewhere that will?

The players would still get the same development after all. The only thing that would be more difficult would be getting first team players who didn’t play on the Saturday to the stadium to play on a Sunday.

If the team were to move away from the lower mainland it would be a crying shame and a sad indictment to any claims Vancouver may claim to being a “soccer city”.

For their inaugural USL season, WFC2 drew an average of 1,682 fans at Thunderbird Stadium, although it certainly didn’t feel that there was that actual number in attendance. Last season, on the back of a great run and three games played out in Langley, WFC2 averaged 1,779 over the regular season, with a high of 3,057 and a low of just 857. Only 1,308 could be bothered heading out for a Western Conference semi-final match up in October.

Certainly not the worst in the league. That dubious honour fell to Montreal, who drew an average of 243 fans to their 15 matches, a high of 966 and an incredible low of 58. I’ve seen more supporters at VMSL matches. Of course, as we all now know, the Impact no longer have their standalone team and are affiliated with Ottawa Fury instead.

You can be pretty sure MLS clubs like Vancouver will be watching how that goes with a careful eye. For all the benefits of a USL team, money and potential losses from it will always come into play from an already frugal front office. 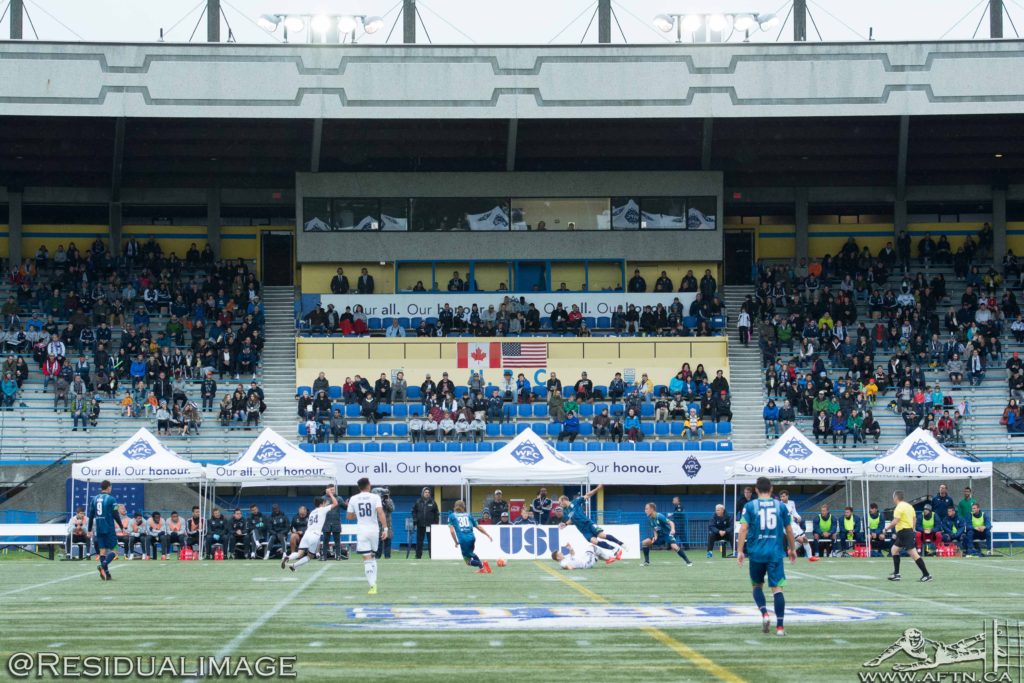 The Whitecaps had the 12th worst average attendance from the 29 clubs in the league. Nearly 300 better than Seattle Sounders 2, which really surprised me, but around 600 worse off than Portland Timbers 2. Both the ‘Caps and the ‘Timbers play at university venues a trek from the downtown core.

Now you can go on about the location at UBC, and rightly so. It’s a horrible place to try and get to if you’re not downtown or in the West End of Vancouver. Trying to get there from White Rock, Pitt Meadows, etc, yeah, I’m not sure I’d even try. So there’s no blaming the fans from me in this regard. Thunderbird Stadium is also an outdated venue that certainly doesn’t give you the best gameday experience. You’re so far from the pitch and it feels like you’re been transported back to Cold War Eastern Europe.

It was a pretty shitty choice to end up with. but after the New Westminster debacle, there weren’t exactly a lot of options available with the short timescales involved.

Langley’s McLeod Stadium isn’t ideal either. Parking is better, and at least free, and it’s a good central location for those in the valley. I have no issues travelling out to there from East Vancouver. In fact, sometimes I got there quicker than driving across the city to UBC.

But it’s not a football stadium. The scoreboard is great, but the seats are uncomfortable, and again quite far from the pitch, and the openness of three sides of the stadium make it a horrendous wind tunnel, even when there appears to be no wind!

The initial novelty of playing there packed some fans in, but it didn’t seem to last. The ‘Caps are playing six games there this year, including Saturday’s home opener against Seattle, so it will be very interesting to see those attendance numbers and of course those at UBC, especially if it’s another season of struggles for the team on the pitch like year one.

WFC2 will play ten games at Thunderbird this season and six out in Langley. Of the two venues, I much prefer heading to Langley, even with the bridge tolls. But money is tight and how many fans from Vancouver want to travel out is hard to gauge. If you don’t have a car, good luck with that as well.

But the Whitecaps need to see that we want to have this team in the area. We’ve heard murmurs that there’s a couple of municipalities who would be keen to give WFC2 a home, including building a new venue for them to play in. Keeping the team in the lower mainland is the win-win scenario for everyone, whether that be in Vancouver, Langley, Surrey, Coquitlam, or wherever.

But if the ‘Caps press ahead with plans for launching a women’s team to play in the NWSL, will the desire be there to have two possible loss-leading sides on the books? The women’s side would certainly draw way more fans, maybe not enough to pack out BC Place as would be hoped, but certainly more than WFC2 at Thunderbird or Langley.

Now it’s important to stress that WFC2 and any new women’s team are not mutually exclusive to each other. The two can most definitely co-exist. It is certainly not a case that a women’s team will only come if WFC2 move on. But if push really came to shove, what do you think would be the preferred option of the FO?

What would be the preferred option for the fans? Well we asked our Twitter followers just that back in January when we were first discussing this very topic and here’s what they voted.

If a NWSL team coming to Vancouver meant that WFC2 made a move out of the lower mainland/BC (not saying it will). How would you feel?

An interesting tie for second place with votes for each of the two options.

But one way to hopefully secure the team’s future here in the lower mainland, and convince any potential suitors to pull the trigger on a deal to bring the team to their municipality, is to make sure that people go and watch the team and show they want to have the team around.

It’s already a cheap ticket. Season ticket holders get vouchers to get to some games. There’s theme days and it’s very family friendly in terms of atmosphere and pricing. The football is also of a good quality for the most part.

We asked new WFC2 coach Rich Fagan if he was going to make a pitch to fans to come out to the matches, what would be his one big selling point? His answer was clear – you’re seeing the Whitecaps stars of tomorrow today.

“The younger players, the ones that have come through the Residency program, they’ve made up a good portion of the youth national teams,” Fagan told AFTN. “They’re at the age now where they’re graduating into the USL and they’re ready to make a difference. If you want to see Canada’s best and brightest young stars, I can’t think of a better place to come and see them play.”

You look at the current WFC2 side and yes, they’re a young team. Even younger than previous seasons, as hard as that is to imagine! There’s going to be ups and downs this season. It may be more like the first season in the USL in terms of results than the second, but this is also a group that has two years of experience in the league despite their age and showed, especially when they didn’t have the MLS players coming down to the team, that they’re more than a match for every other club in the Conference.

You look at the squad just now and it’s certainly not a push to imagine David Norman Jr, Tommy Gardner, Kadin Chung, and the Baldisimo brothers as future MLS players for the Whitecaps. All players that Fagin’s seen come through from the Prospects teams pre-Residency.

Do Whitecaps fans care about that? Do they have any interest in supporting the future of the club? If you do and you want to make sure that there is a WFC2 team here to support, then you need to get out regularly to show it.

That starts this Saturday. It’s the home opener for the new season and a Cascadian derby to boot. A 3pm kick off against Seattle. We want to see a packed stadium in Langley.

Love them or lose them? Do you really want to find out if that scenario is going to play out? Come show your support.