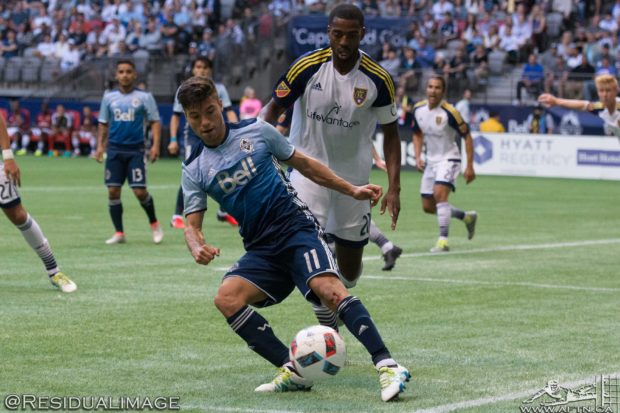 Champions League conquests out of the way, and its achievements written into the history books, attentions now turn back to MLS, where instead of watching Gignac curling world class shots into the top corner, we can watch Chad Barrett bumble around.

The good news is that the Whitecaps are onto something. There’s a scent in the air, and the team are onto it. The team really did go for it against Tigres, a lot more than I thought they would, and the better team won. But now this tired squad needs to travel to the altitude of Salt Lake City, and the name of the game will be squad management.

I realise it is a little early in the season to be talking about players burning out, but this could be a crucial moment in the first part of the season. Kendall Waston, Tim Parker, Jordan Harvey, Matias Laba, David Ousted, Alphonso Davies, and Christian Bolanos have played quite a few games in succession. It being an away game, I think Robbo will go for a heavily rotated line up. I always find these kind of games intriguing, seeing the squad players get a chance to make a case for a starting position. In particular, Kyle Greig and Nicolas Mezquida are two players that have had to wait in the wings for quite some time.

Greig has been fantastically patient, and having worked his way up from the USL, his spot in the MLS roster is well deserved. We have only gotten glimpses of what he can do at the MLS level, but his strength, as well as his nose for goal, could contribute in a big way to the first team when needed. I would like to see him feature at some point, perhaps from the bench for the last half hour, to relieve Fredy Montero.

Mezquida’s situation is a bit more of a head scratcher. He played very well in the San Jose game before being sacrificed for a replacement goalie coming in, but has not featured much otherwise. With the injury to Brek Shea, and the trade of Kekuta Manneh, it is high time we saw Mezquida start in the attacking midfielder position this Saturday. He is in many ways the ideal advanced midfielder for an away match. He hustles and harries, and works his socks off.

I could see the backline going through a serious makeover. A back four of Jake Nerwinski, Christian Dean, Tim Parker and Marcel De Jong could be on the cards here. I don’t expect that backline to be airtight, but each of those players (apart from Parker, who already has one) has a potential to stake a claim for a permanent spot. I could see the sword/shield combo this weekend being a Teibert / Tchani one. The mighty T’s will have their work cut out against experienced midfielders like Kyle Beckerman and the dynamic Luke Mulholland. Joao Plata is still hanging around too, and we know how hard he can be to play against.

The attacking midfield trio I would like to see is the aforementioned Mezquida starting in the number 10 position, Techera on the left side, and Mauro Rosales on the right. A couple of players will have to bite the bullet with the injuries in the midfield, but I’m sure there will be future squad rotation to compensate.

What should be the gameplan in a situation like this? All things considered, a point would not be a horrible result. RSL have been struggling more than the Whitecaps of late, but the circumstances are significantly more challenging for the ‘Caps.

I believe Robbo will instruct the players to look for chances on the counter to make things happen. It will certainly be an interesting game if the rotated players do get a chance to make an impression, and if they get a positive result, they will have gone a long way to proving that they should feature more regularly.

How much rotation will Carl Robinson go for?

Can the players that come into the side stake a claim?