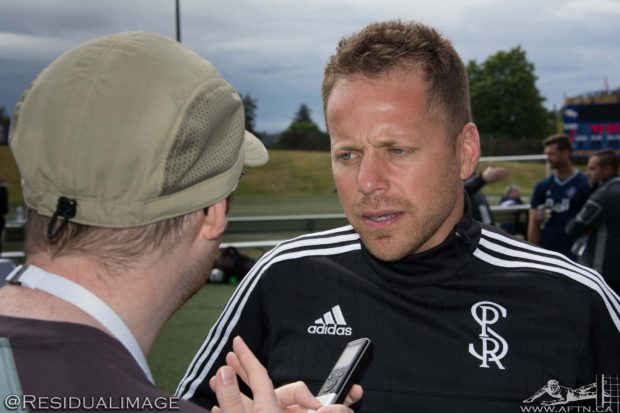 It’s been around seven months since Quebec native Marc Dos Santos was appointed the first ever head coach of new expansion side Swope Park Rangers.

With a nine year coaching career under his belt in his native Canada and Brazil, Dos Santos had just guided NASL side Ottawa Fury to the 2015 Fall season Championship and a place in the Soccer Bowl in his second season in charge and looked set to build upon that success with the Fury moving forward.

His decision to leave Ottawa to join Sporting Kansas City’s new USL side surprised many in Canada. It was leaving a Tier 2 side to move back down to Tier 3 in the North American footballing pyramid, but the opportunity to start something fresh and different, and the MLS factor and involvement, provided too much of a lure for Dos Santos and he jumped at the chance to head south to work with KC head coach Peter Vermes.

“I had two years and a half contract in Ottawa and I wanted to build a project that would stand and have strong foundations,” Dos Santos explained to AFTN. “After those two and a half years, I felt it was accomplished. We won a title, we went to a final and when Peter spoke with me, I think as a coach you don’t have a lot of time to live incredible experiences.

“I wanted to grow as a coach. I’m still just 39-years-old. My CV looks like a guy of 50 but I’m still 39. I’ve been in places, I’m growing. I felt this step, to do one or two or however many years I’m going to be here, at least it would be a step that would give me more knowledge on what is the incorporation of a B team and how you work with that. I needed to try this dynamic. I felt this was the last piece of my development as a coach.”

The first few months with Swope Park Rangers have been challenging at times for the Canadian. Both the Rangers and the Fury were new, expansion sides when Dos Santos took the helm but the similarities pretty much stop there.

Dos Santos has gone from being the overall man in charge and decision maker of a club, to becoming part of a Sporting KC coaching team that is operating across different levels and age groups. It’s been an adjustment, and one that he’s still getting used to.

“It’s been very different for me to be honest with you,” Dos Santos revealed. “It’s been a very different experience because when you’re coaching a B team, you have to be a type of educator. You have to be someone who is very used to developing players. That role is a little bit new for me, even if I got some experience with that being in Brazil.”

“It’s been a new role and at the same time, every MLS reserve team, they don’t control 100% of everything. I think that’s the toughest part.”

Dos Santos has been relishing the challenge though, and what it’s meant for his own personal development, but admits it’s taken a bit of getting used to where Swope Park fit in with everything in the overall Sporting KC set up and how that affects decisions he can make around his team.

“You have to do your moves always thinking about the first team,” Dos Santos said. “Even when it comes to the age factor. We had a couple of opportunities to sign players of 27 and 28 years and we didn’t do it because of the fact that we’re working towards the first team and we have to be careful with that.

“So I think it’s been very different to my last couple of experiences but it’s something that gives you more knowledge, more experience and only makes you better as a coach.”

But the relationship between Dos Santos and Vermes is a close one and the two teams work well together side by side in a number of different aspects.

One of those being that KC’s parent side making sure there is adequate notice and at least three days of squad training for any players loaned to Swope Park from the MLS team, something which doesn’t happen at all MLS2 sides, where teams and player decisions are often made the day before, and sometimes day of, the game.

“With Peter Vermes, that hasn’t happened,” Dos Santos told us. “He’s been fantastic with that and the organization has been very good. It’s not a problem. If we say know Jordi Quintilla is going to play with us Saturday, Peter has always been careful to at least three days before to let us know that that’s going to happen. So at least we have three training sessions to incorporate and make that work.

“But I think one of the factors that helps is that our offices are next to each other. So the dynamic at Sporting KC and the office is that everybody is close to each other and that makes that day to day, every time we’re speaking, it’s easier to organize the things. Maybe it’s more difficult if your office is in one part of the city and your first team coach is in another one. Peter has really done an incredible job of being careful and making sure we know with notice before.”

It’s been a mixed start to the year for Swope Park Rangers, as the team struggle to find their feet in the league in their inaugural season. Twelve games in and the team are sitting on 14 points and outside of the Western Conference playoff places, after recording four draws, two draws and six losses so far.

After two wins and a draw to start the season, Swope Park have struggled to get on a consistent run, following up any points they’ve been getting with a loss. Injuries have played a part the team’s issues with consistency, which has resulted in Dos Santos missing several experienced players. There may be the silver lining of the team’s younger players getting blooded sooner, but in terms of getting the results the club is looking for, it certainly isn’t optimal.

“It’s a new team,” Dos Santos noted. “All a bunch of new guys put together. It’s really something that we’re struggling with, with consistency. It’s just a case of little details. Of being consistent in the moments of our game, especially on the defensive side. It’s been up and down a lot. But I think it’s normal. With an expansion team you’re always going to see things like that. I think it’s normal and you have to move on from there.”

Swope Park’s latest loss came on Sunday, when they fought back valiantly in the closing minutes to almost grab an unlikely point against WFC2 at Thunderbird Stadium. Once again the defeat came on the back of an excellent 4-0 midweek win at home to Rio Grande Valley.

Despite two goals in two minutes and a last second free kick that was tipped on to the post by Marco Carducci, they came away on the wrong end of a 3-2 result against the Western Conference leaders. It was their fifth away loss of the season, but Dos Santos was at least pleased with the fighting spirit his side showed to get themselves back in the game and feels it’s something he can use to push him team on now for the rest of the campaign.

“One of the things is we’ve been struggling a lot with travelling in our team,” Dos Santos said. “The first half was a lot due to that. There was a certain fatigue. We were slow in everything we were doing. We were late to everything. Then in the second half, with the substitutions, the reaction of the team never gave up really. Even after the third goal the reaction of the guys was great. We knew one goal could have changed a little bit of the dynamic of the game.

“Could we have tied the game at the end? Absolutely, but overall, with the type of first half we had in the beginning, you don’t deserve to get out with points. Maybe if we had a better first 15 or 20 minutes we have maybe gotten the tie, but overall great spirit and it was great to fightback but it wasn’t enough.”

It’s going to be a tough first USL season for Dos Santos and Swope Park Rangers. Most of the MLS2 sides seem to be going that way in their inaugural year. But he didn’t make the move for an easy time of it and wants to be challenged as a coach.

He has no regrets about leaving Ottawa Fury, but did watch their recent Canadian Championship run with a lot of interest and pride. The legacy and the foundations of his two years in charge in Ottawa is still being felt.

“One hundred percent [proud],” Dos Santos enthused. “I think it was maybe the last piece that was missing because it’s tough for a team in two years to win a Championship, when we won the Fall season, and then go to a final. People sometimes don’t remember that but the last time two Canadian teams were in a final in a North American competition was Vancouver against Montreal in 2009. Then it happened with Ottawa. I was lucky to be in both finals.

“To put Ottawa on the map like that, we felt the only piece that was lacking was qualifying for the semi-finals [of the Canadian Championship]. So it was great for Paul Dalglish and the club that they were able to do that and I’m very happy for the club.”

But as proud and as happy as he is for his old side, his focus now is fully on the job at hand with Swope Park Rangers.