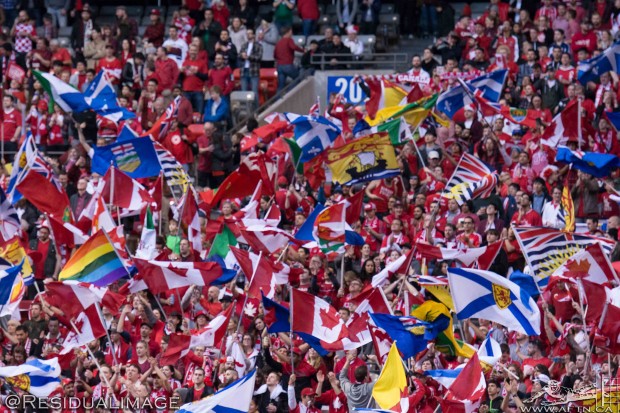 On Saturday night I found myself pre-game in The Belmont drinking a lovely Nut Brown Ale and I met a Brazilian guy called Bruno who has just moved to Vancouver. He was a devotee of a second division Brazilian club and he had also lived in Montpellier in France so he had seen Ligue 1 matches. He sat with me and asked “what is Vancouver supporter culture like?”

So I had to think for a moment. The first thing that came into my head was that we are inclusive. As far as the Southsiders go we want everyone to feel like they can belong, we want everyone to participate. It’s not just a polite Canadian thing. We are expressly inclusive meaning that we are anti-sexist, anti-racist and anti-homophobic. “Ah,” said Bruno. “Like St. Pauli“

Well, maybe a little. The fans of St. Pauli are well known as progressive, leftist activists. They advocate away from the stands for social equality, housing and economic justice. The philosophy of the whole club is specific about its role in society as well. But we aren’t especially politically active on those fronts outside of the Southside really.

We did hang our “Show Racism the Red Card” banner on Saturday night. We do support charitable causes, the most notable of which perhaps is the Vancouver Street Soccer League. But that’s a small cry from the supporters clubs of Fenerbahçe, Bešiktaš and Galatasaray who came together in 2013 to help lead the protests against the Turkish president Tayyip Erdogan. I do have an affinity for those clubs though and especially Bešiktaš with whose supporters, The Çarší, I joined in a massive peace protest on the Galata Bridge in Istanbul before a match in 2013. I still have the shirt one of them gave me.

We might be inclusive, but our collective activist politics extend about as far as tweeting the hashtag #DontBeADick.

However, we have discussions all the time about the nature of this inclusive mandate. Last year it came up around the flying of ‘Refugees Welcome’ banners or in Christy Clark’s tweets calling the Sounders “princesses.” This past weekend it came up in the way some of us would choose to respond to the Mexican goal kick chant: “Puto!” You can go translate that for yourself, if you don’t know what it means. Suffice to say that it isn’t a term that fits with the overall mandate of an inclusive sporting experience.

As a response to that, some Southsiders acquired a rainbow flag, a symbol of inclusiveness that is of course used specifically to celebrate lesbian, gay, bi, trans and queer pride and liberation. Some in the general Canada supporters ranks said that it was too political for a supporters section, without any thought to the fact that we would be waving national flags that represented a colonial state, and one flag that represents the national ambitions of a particular province.

Others said they didn’t mind if it was flying. Still others who were LGBTQ supporters were moved to tears that we had some. So if the controversy was between an academic argument about what is a political artefact and a real emotional feeling of solidarity and support, it was easy for me to see that there was no harm in waving a few. So I offered to put my money where my mouth was and I waved one.

During the Canada match we knew we were going to hear this chant from a few thousand Mexico supporters. In fact, several hundred had no problem at all standing outside BC Place welcoming the Canada supporters on our march with a gauntlet cheering “Putos” right at us. It had the quality of a good natured teasing, but I’m not sure it was received that way by everyone. I walked past them waving my pride flag.

On the water taxi back home to Bowen Island a jockish 15 year old boy I used to coach asked me where I watched the game from.

“Did you see the Pride flags?” I asked. He nodded. “One of those was me. What did you think we meant by them?”

On Saturday I found myself back in the Pigeon Loft with some of our Pigeon Casuals stood in our places at the top of 253 near the tunnel. There were still brave signs of pride flags among us, but the welcoming and inclusive nature was more practical and less political. This year the Caps have removed the tarps from the top of 253 so our section extends way above where we stand, There are a lot more kids with us this year. The Southside is certainly not considered the “family section” although we have always had kids with us and families are always welcome as long as they participate and have some tolerance for the boisterous nature of the section.

The kids are always game to help, so I dragged a couple of dozen flags up to the Loft and handed them around and lo and behold the miracle of a tifo deployment squad composed of 10 year olds was born. Song sheets were magically spread around and newcomers were indoctrinated into the culture of support right there on the spot. Welcome. Give us a hand. Thanks.

After the match, the kids all brought their flags back and said things like “That was soooo awesome! We’ll be on TV!” and I had the sense that this whole inclusivity thing, without regard to any of the things that divide us – be it age, race, gender, orientation or ability – was perhaps the best kind of politics.

Give people a job and put them to work creating something that we can all take pride in. Sing together, work together, celebrate together and support together. Sure we’re out for a few pints a good laugh and a nervous evening hoping for a goal from open play, but there is something happening in the Southside at a slightly deeper level.

This kind of summed it up for me. Saturday afternoon a seven-ish year old girl showed up with her dad at the Belmont with her face painted and a dog eared song sheet. Dad said she had been studying the songs. “Which one is your favourite?” I asked.

Ah. The St. Pauli Song. “Shall we sing it together?” I asked her. And we did, to warm up the supporters right before the march. A bunch joined in. The look on her face was priceless. She never stopped singing. Right out the door, right down Granville and Robson, right into the stands.

Takeaway from that march: my kid is a maniac and I love it haha