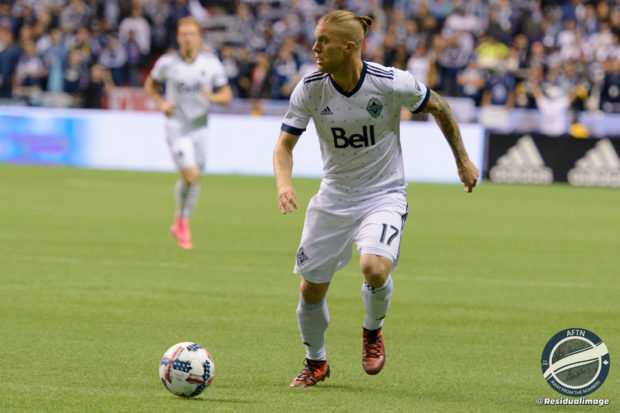 It’s been something of a strange season for Vancouver Whitecaps defender Marcel de Jong.

The Canadian national team staple started the season on the fringes of the Whitecaps squad, playing minimal minutes for the first half of the year then thriving on a post Gold Cup resurgence that saw him unseat Jordan Harvey to deservedly become the ‘Caps starting left back by the time it was over.

De Jong was just hitting his stride for Vancouver when it all came to a shuddering halt, leaving him wishing both he and the team had a bit more time to shine.

“We worked really hard to reach the playoffs. We had a great first game against San Jose and then we knew it was going to be tough against Seattle. After the first game, we still had to believe that we had a good chance. Unfortunately it didn’t go our way. And that’s it. The season’s over.”

De Jong joined the Whitecaps last July on an 18-month contract, with a club option, having previously had a spell in Major League Soccer with Sporting KC. He’s been used sparingly in Vancouver, making just 23 regular season appearances in his time here.

But just as he was starting to really show what he could mean to the team, starting all three playoff matches this season, his future is up in the air as the Whitecaps decide whether to pick up his option. At a salary of $140,000, and with the experience he brings to the squad, it seems like it should be a no-brainer that he’ll be back, but you never know.

And for De Jong, there’s nowhere else he wants to be right now.

“I have an option year next year,” De Jong said. “I have to talk to with the coach and see what he says. [See] if he is happy with me. I’m happy here, my family’s happy. I want to stay here as long as I can. If it’s up to me, I’ll be here for the rest of my life!” 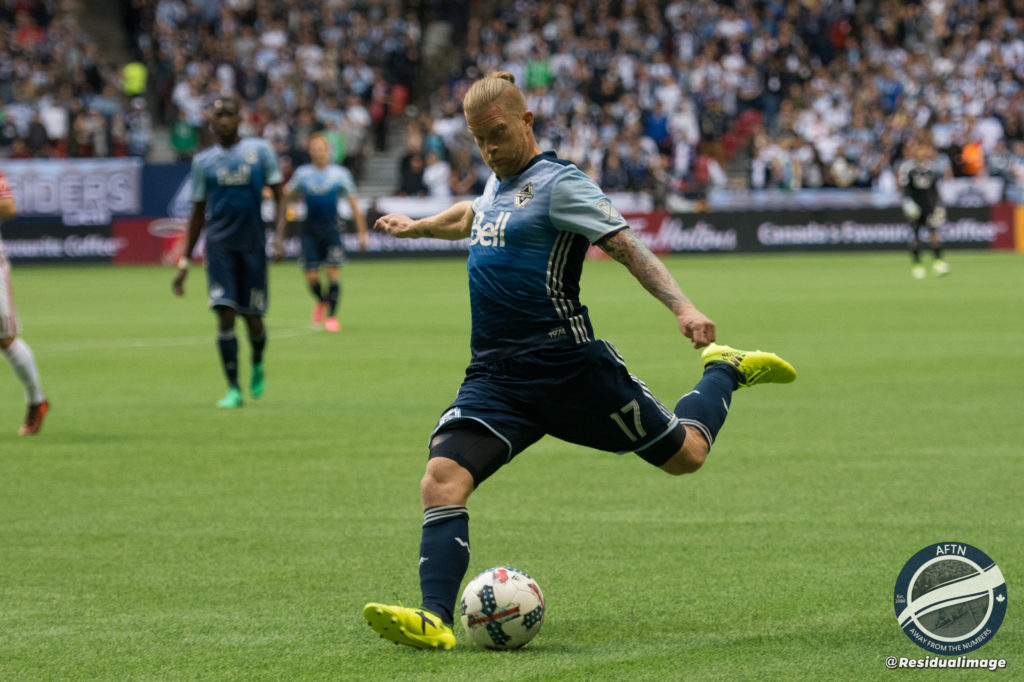 Despite the disappointing ending against Seattle, De Jong feels that the season shouldn’t be summed up by the two poor performances against the Sounders, preferring to highlight the positive aspects to be taken away from the year as a whole.

“With the Champions League against New York and against Tigres, it was a good opportunity for us to show ourselves in CONCACAF and it was really something to be proud of,” De Jong said. “The second thing was reaching the playoffs and winning a game in the playoffs and making it to the semi-finals, which is huge for the club.”

On a personal level, De Jong’s season was very much a case of pre and post Gold Cup fortunes.

De Jong’s MLS minutes were very limited in the first half of the year. His only start came in the snowmageddon that was that match at Real Salt Lake in April. His other three appearances were for a minute apiece.

That’s tough for any player, never mind a veteran and national team regular.

“It was a long year,” De Jong said. “Especially in the beginning when you don’t play every week. It’s long, it’s stressful. You want to play every game. You just have to keep your head down, work hard, and wait for your chance. I think when I got the chance, I took it with both hands and I did well the last couple of weeks.”

The turning point for De Jong came with the Gold Cup.

We spoke to De Jong before he headed off to play for Canada in this year’s tournament, touching on the difficulties of going from not playing league football every week to then having to perform at international level.

To his immense credit, any difficulties were not obvious and De Jong put in some excellent performances, playing 90 minutes in three matches in the US. Those performances clearly caught Robbo’s eye, and kickstarted De Jong’s season as a Whitecap.

“Yeah, I totally agree,” De Jong said. “With the Gold Cup, playing for Canada always helps me. I always have a good feeling after a Canada camp or after a Canada match. Having the chance to play three or four games for them, that helped me a lot. Physically and also to get into a kind of a flow, and then after that I got more and more playing time with the Whitecaps. Yeah, it helped me a lot. I think that was the turning point.” 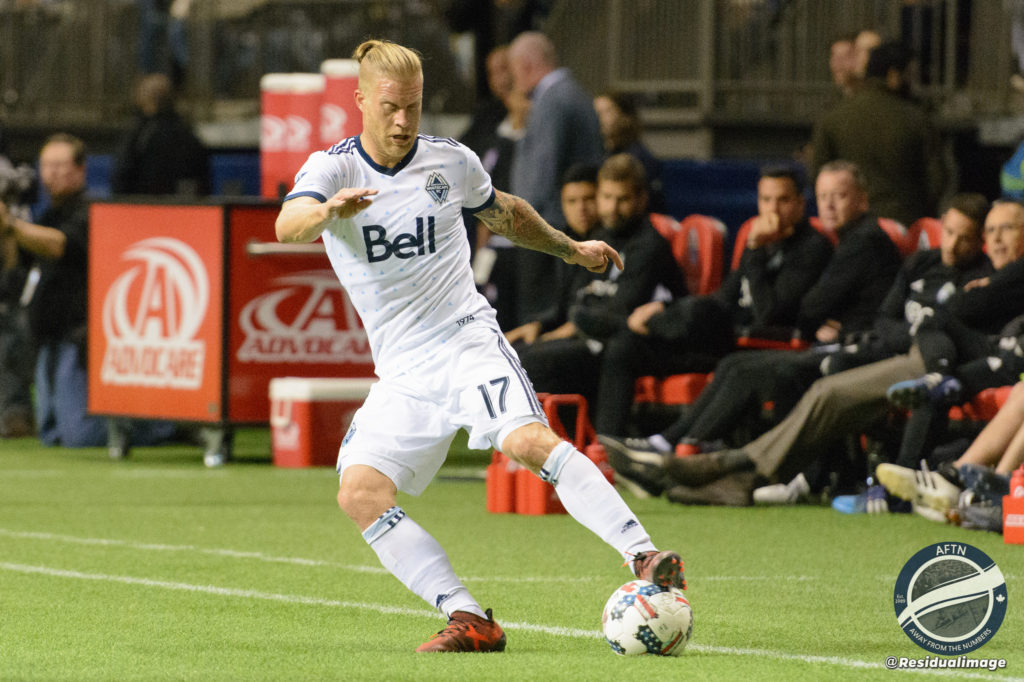 De Jong headed back to Vancouver and split the left back role with Harvey, starting eight of the ‘Caps last 15 matches, and all three of the playoff games. The reason seemed clear – the Canadian offered a much more attacking threat up that left wing, with the ability to tear forward while being able to track back well defensively.

His playing style seems ideal for the kind of attacking full backs Carl Robinson clearly wants to have.

“Especially when you have Jake on the other side,” De Jong feels. “He goes four or five times up and down, and then I can go four or five times. It’s hard for the other team to deal with that. In general, it’s been working out for us. It’s the type of football every team wants I think. It’s something special and extra offensive, so attackingwise, it’s good for the team, and for every opponent, it’s hard to deal with.”

With Harvey looking likely to move on, the left back position next season would appear to be a battle between De Jong, Brett Levis, and Deklan Wynne. All three fit the attacking mold. That said, don’t write Harvey off just quite yet.

If De Jong does come back, he’ll be one of the leaders on the team, especially if the likes of Harvey do head to pastures new. His experience will be crucial to a Whitecaps side that Robinson has already said he’d like to go even younger next season. De Jong would certainly be one of the old heads in the squad at 31-years-old, even if he doesn’t like to think of himself as that.

“Yeah I guess so,” De Jong said with a laugh. “I don’t want to be called older! But obviously, you’re getting up there. It’s something that I like. I still have to learn a lot. I still have to speak up more and be a leader. Also off the field. I always see myself as a leader by example on the field. That’s something I also have to learn, but yeah, I enjoy it and hopefully I can continue this.”