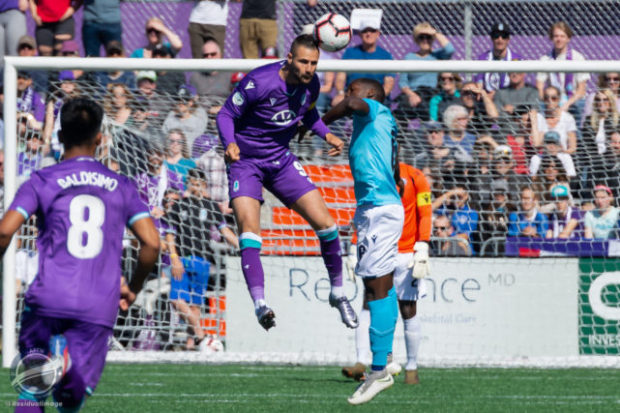 If you want to know how much Pacific FC already means to Marcus Haber, you only had to look at the back of his head on Sunday, for shaved into the back of it was the club crest.

Haber put pen to paper with Pacific FC in early January as one of the first ‘name’ players to make the move to the fledgling league and he’s been itching to get on the pitch since. He had to wait nearly four months to do so, but that time finally came on Sunday in Pacific’s inaugural match, a 1-0 win over HFX Wanderers at Westhills Stadium.

Haber couldn’t find the scoresheet on his debut, but that aside, he felt the day couldn’t have really gone too much better.

“It’s just how we wanted to start, three points on the board,” Haber said. “It was a good game in front of our home fans, but it was a grind for sure. It was tough going down to ten men but we pulled it out. I thought we were good defensively and those are the kind of performances we need in this league for sure.”

Haber was named Pacific FC captain ahead of the match and he led from the front, putting in a hardworking, bustling shift that caused problems for the Wanderers defence and brought praise from his head coach Michael Silberbauer.

“Marcus was tremendous up there,” the Pacific coach said of Haber’s performance against Halifax. “He took on the battles, held the ball, and relieved the pressure at times. He held the ball until we could get players up the park and put in a very good performance.”

Haber’s experience will be crucial this season for Pacific FC, especially in the early going. It’s a young squad, with seven of their 18 players are aged 20 and under. Haber is one of the old men on the team. He’s 30 now, putting him behind only 34-year-old Issey Nakajima-Farran and the injured 32-year-old Marcel De Jong in the age stakes for Pacific.

With ten year’s professional experience under his belt at home and abroad and 27 caps for the national team, he knows he’s being asked to be a leader and that’s a role he’s already relishing.

“It’s an honour for sure,” Haber said of wearing the captain’s armband for Pacific’s inaugural season. “It’s a lot of responsibility, but we have leadership throughout the team, from front to back. Whoever has the armband is just an extension of the entire team. There’s leaders across the board. It’s an honour and I look forward to it.” 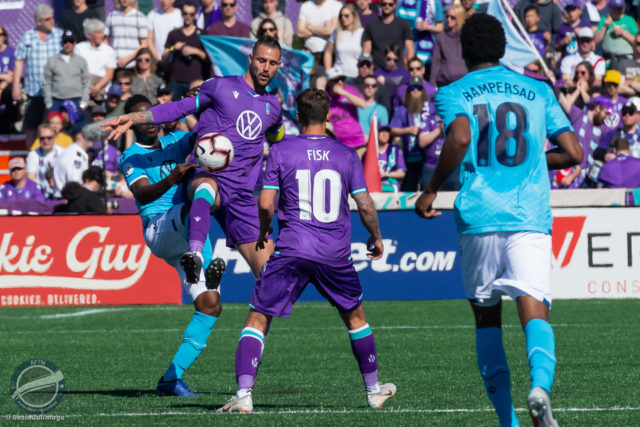 Having parted ways with Scottish Premiership side Dundee, after a less than successful loan spell with Scottish Championship side Falkirk, the Vancouver native had a number of options to weigh up about where the next stage of his footballing career would take him, but the lure of heading home and being part of something special, something new, was too much of a lure for the big striker to pass up.

“I’ve always had Canada close to my heart, it’s where I’m from,” Haber told us. “I’m a west coast boy for sure and I’ve been away for nine years and when this project came about it appealed to me. Everything was fantastic in the buildup and I feel at home here for sure.”

Haber is back playing his football in BC for the first time since 2010 when he was loaned back to Vancouver Whitecaps from West Brom to get some first team football. The striker had signed for the Baggies in January 2010 having impressed with the Whitecaps the previous season in the USL.

Eight goals in 30 appearances had seen Haber named the 2009 USL Rookie of the Year, and his bustling style had attracted attention from a number of overseas clubs. With options at home fairly non-existent, Haber made the move to Europe where he stayed until earlier this year.

Looking now at the launch of the Canadian Premier League, the soccer landscape in the country is completely different. A landscape he never imagined would be possible when he was playing at Swangard with the Whitecaps ten years ago.

“Definitely not,” Haber admitted. “At that point you didn’t have the same infrastructure and the same ability to walk into the professional game in your own country. Back then you really had to go abroad if you wanted to pursue a career. I think now it’s fantastic. It’s amazing for the country and it’s great for young players for sure.”

Haber’s played in front of loud and passionate fans in Canada, Scotland, and England, but he truly believes the atmosphere at Westhills Stadium on Sunday was on a par with what he’s experienced elsewhere.

“It’s up there,” Haber enthused. “It’s as good as it gets from 5,000 fans. They were energetic and the atmosphere was fantastic. It gives us that little bit of extra energy for sure, especially when we’re down a man and it’s tough and your legs are starting to cramp. But it was great to play in front of the home fans. They were fantastic.” 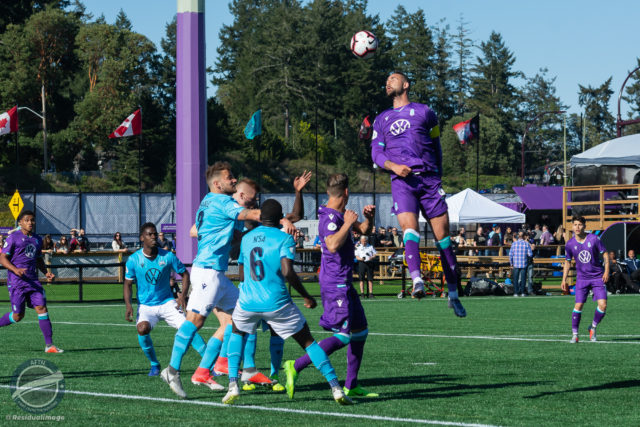