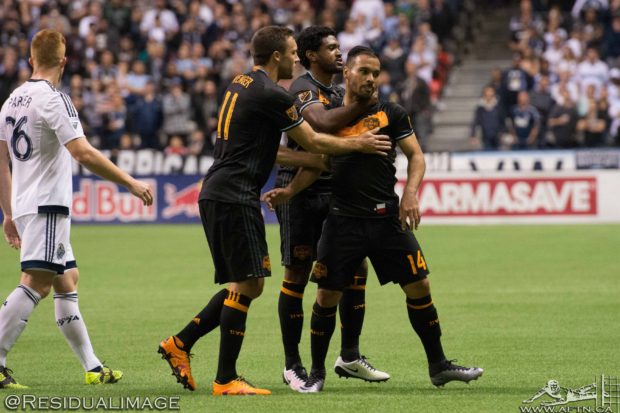 The long road stretch continues. Will the form? Or is it going to come to a screeching halt in the heat of Houston?

The smash and grab is always a good away plan, and so far it seems the Whitecaps have been finding a good rhythm with the switch to a 4-1-4-1, no matter if they are getting possession (as in Montreal) or looking for a counter (like in Colorado). Its seems the pieces we have right now fit this formation well.

Houston have been doing well. They currently sit fourth in the West, two points behind first placed Dallas and three ahead of sixth placed Vancouver. Much of this has been due to the amazing home play they have generated. They have not lost a game yet at BBVA Compass Stadium this season. Their five wins and 1 draw show how well they have ripped apart teams in the temperature of Houston, making the stadium the fortress again that it once was a couple of seasons back.

They have a very dynamic and excellent attacking corp of players. The Honduran wingers Albert Elis and Romell Quioto are making the league take notice of slick passing and sweeping dribbles forward, not to mention goals. Then they also have the dynamic attacking forward Cubo Torres, who even when injured doesn’t seem to stop that attack.

Houston have also seen the dynamic two way play of the midfielder Alex, who does the dirty work and then can set up a goal. He has proved a vital player, leading the team and co-leading the league in assists, making sure Dynamo can transition well and hit their opponent quickly while flat footed. Their 4-3-3 counter attacking team has been an enjoyable one to watch recently.

Right now Houston Dynamo are looking dangerous and I am not looking forward to this game. Perhaps that is too pessimistic; this is MLS after all, and this past week of games has shown anyone can beat anyone. I have been enjoying the 4-1-4-1 so far, it has been a good fit for this team. The question is, is that going to be a good fit versus this physical and fast Houston team?

I think keeping the core central midfield will be a good idea. Tony Tchani, Andrew Jacobson, and Matias Laba will be needed to fight against the midfield trio of Houston. They have formed a solid backbone against teams and we will need that to win the midfield battle.

Fredy Montero has been a bit quiet this stretch, but he needs to be getting better service from the wings. He has however shown a willingness to defend and do the little things. Hopefully the ‘Caps can get him more service.

With David Ousted naturally getting the nod in goal, the back four should be kept the same. Jordan Harvey, Tim Parker, Kendall Waston, and Sheanon Williams have been doing a great job. Chemistry and understanding is developing. Parker and Waston continue to dominate the middle. Perhaps Waston has found his 2015 boots?

On the wings considering how needed Quioto and Elis are to Houston’s play, I wouldn’t mind seeing the more physical play of Alphonso Davis or Brek Shea out there. Davis especially, considering his commitment to defence would be a better idea than Cristian Techera, who may be bullied out due to his size. Not only that, it would probably suit the Whitecaps, especially if they want to play on the counter and keep Houston’s wide players playing honest defence.

My guess is the ‘Caps will try to bunker and defend, and hit on the counter. They can do that, but then again Houston generates more offense than Colorado. So the question will be if the ‘Caps defence can continue to do well.

How will the Whitecaps defence deal with the Dynamo’s explosive attack?

Will we see the same midfield trio for the fourth consecutive match?

Can the ‘Caps pull off another smash and grab?

Alex – Could have picked many people, but he has been busy making things happen through midfield and his two way play has been great. If he gets space he’ll punish Vancouver, or maybe we can rile him up enough to get him sent off again, like he was in the incident with Pedro Morales at BC Place last season.

Nick – 1-1. The Whitecaps will be lucky to get out with a draw, which is still a positive result in Houston.