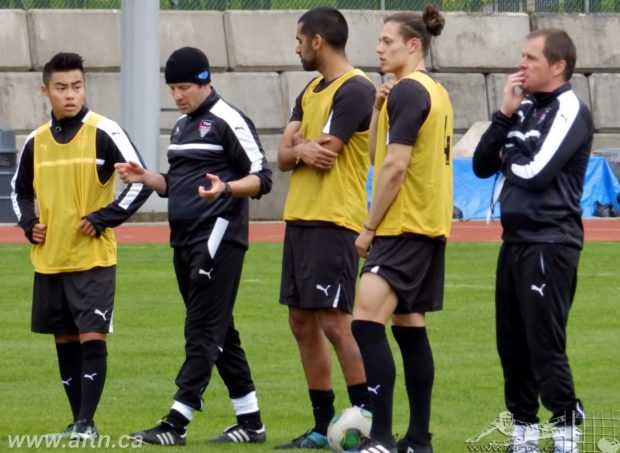 It’s been an eventful first week in the PDL for TSS FC Rovers.

There’s a lot of ways the team could have envisaged their first competitive week playing out, but ending it bottom of the table with a minus points total wouldn’t have been one of them.

They’ve been on an emotional roller coaster for sure, with a lot of learning points along the way, as they now get set to host their first ever home game at Swangard Stadium on Friday night.

TSS couldn’t have asked for a tougher start, playing back to back away games at last season’s Western Conference champions, Calgary Foothills. The team went from dreamland and a three goal first half lead, to the agony of a stoppage time defeat after giving that up in the first game, a 4-3 defeat. They were then outmuscled in the second match, coming away with a 2-0 loss.

The Rovers’ week went from bad to worse when they were advised on Tuesday morning that they had fielded an ineligible player in the matches and were deducted three points. Now sitting at the foot of the Northwest Division on a points total of minus three, the only way is up for the team.

The player in question was Daniel Davidson, who just happened to be the player who scored TSS’ first ever goal just 72 seconds into the match with Calgary. Davidson played last season with Kitsap Pumas in the league, which as a result meant he needed to have an International Transfer Certificate after his registration, which didn’t happen.

“We had about five or six players that we needed to get ITC clearance on,” TSS head coach Colin Elmes told AFTN at training on Wednesday evening. “And the problem it turns out for Daniel, and for us, is that he never actually got registered.”

You live and learn. And right now TSS are still finding their feet in their new environment, learning about the league, their players, and everything else that goes with it.

There were still a lot of positives for Elmes to take from the two games against Calgary in terms of his team’s performances and what he can expect from individual players, along with learning what the team needs to quickly improve on.

“We learned that they are capable of keeping the ball in the first two thirds of the field quite comfortably,” Elmes told us. “In the second game, in the second half, I know it was 2-0 and Foothills had dropped off us a little bit, but we probably had about 70% of the ball in the second half and didn’t penetrate enough. There were multiple opportunities to run, whether it was out of the backline, into the midfield, or from the midfield into the attacking third of the field, and we chose to go sideways or backwards or what not. So we’ve spent a bunch of time this week about getting themselves into more advanced positions and getting the ball in-between the lines.

“I said to them if we go offside ten times on Friday I’ll be happy. That means we’re trying to get ourselves into goalscoring spaces, because with all the possession that we had in the second half of the Sunday game, we only generated probably three scoring opportunities. Maybe one was a slight A, the other two were like B’s and C’s. With that much of the ball, you need to be in the sort of 10 to 12 range for me, and then you give yourself a chance of actually scoring.” 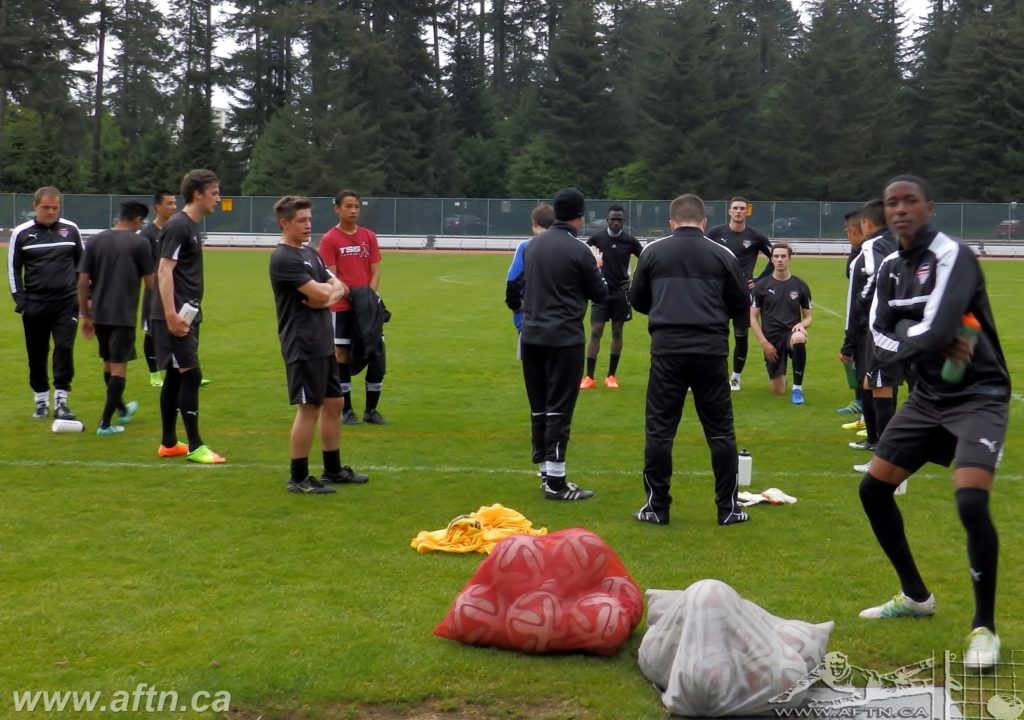 All in all, Elmes was pleased with how his side showed, considering he travelled with a depleted squad and some players only arrived with the group in the days leading up to the first match and were still getting to know each other and everyone’s playing styles.

The coaching staff are also still learning about the players’ personalities and were caught a little off guard just before the team headed out for their PDL debut.

“We were in the dressing room, we’d had our preseason game but maybe hadn’t gone as well as we’d hoped and the young fellows were incredibly calm and surreal in the dressing room,” Elmes revealed. “Willie [Cromack] and I thought ‘oh are they going to be able to lift themselves up’, then of course the game started and boom, they clicked in. So we learned that there are some very calm, quiet, relaxed, young soccer players here that can step onto the field and change their personalities to compete.”

TSS played some nice football, with a passing game that will be fun to watch on the grass of Swangard. Possession counts for nothing though if you don’t do anything with it and produce a final product. That was where the Rovers struggled.

Elmes was quick to praise Calgary Foothills for their resilience and fighting spirit, and hopes his team can draw a little from it themselves once the team find their feet, but he was also proud of the battle his side put up over the two matches, ultimately losing out with the help of some refereeing decisions not going their way.

“Their coach, Tommy Wheeldon, who’s always good for a laugh, said to one of our players – ‘you know how to pass, we know how to win’,” Elmes said. “They’ve gone about their business in a way that I think shows their polish in dealing with situations. Let’s be honest, if we were 3-0 down to them, we wouldn’t have found a way back into that game, not at that stage that we’re at.

“But those guys, they use the term University of Adversity in their world. I think they’ve been through it a few times, so this 3-0 down, I think they’ve had a bit of practice in recovering from things that look like they’re lost and what not. So we need to find some way [to do the same]. Again, when it’s brand new, and the players shaking hands and saying hello to each other a lot, it’s difficult.

“When you’ve got some familiarity and you’ve been through it, you learn to fight. At the end of the day, we were quite happy. The other team needed three penalties of the six goals that they scored. You could argue that only one or two of those were real, but the reality was they weren’t breaking us down as much as it appeared. We were a little bit more resilient than what giving up for straight goals suggested.”

TSS succumbed to an aerial bombardment from Calgary in that first match. It wasn’t pretty but it was effective, and Rovers had no answer to it, which they need to address quickly if they want to see success this season.

“We learned clearly that if this league embraces direct play then we are going to have to get much better at being more resilient and more able to compete,” Elmes added. “Not just for five minutes but over a long period of time when the ball is spending a whole bunch of time in the air.” 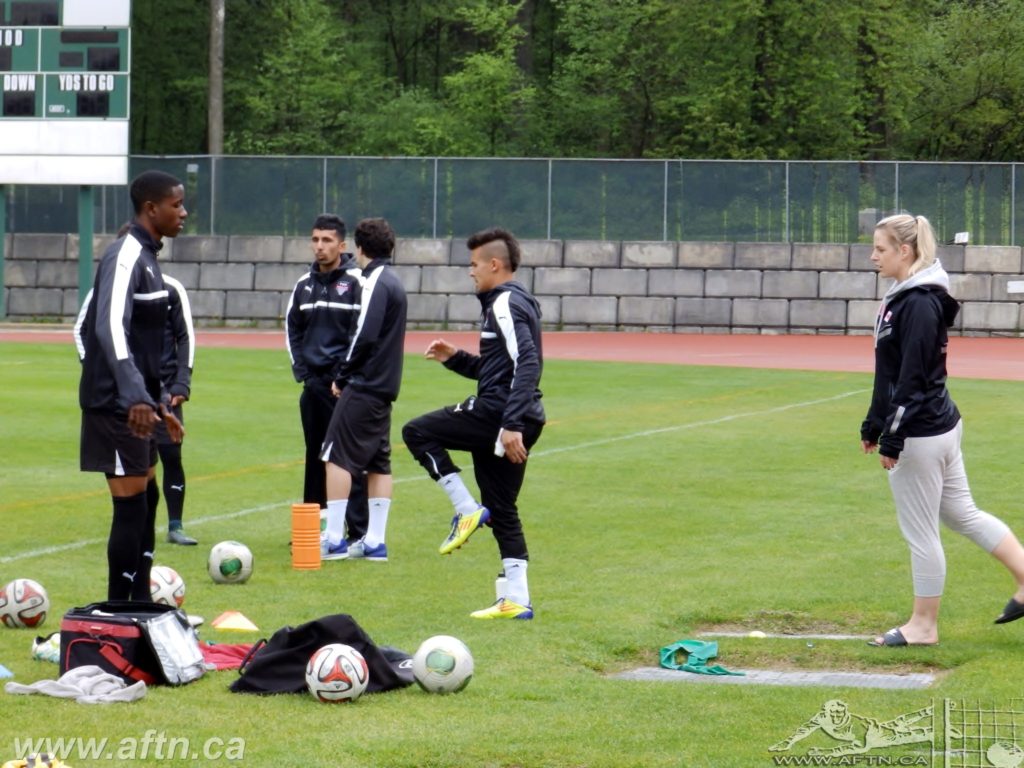 Next up for TSS Rovers are Lane United, in the club’s first ever home match at Swangard Stadium on Friday night.

The Eugene based side will provide a whole different proposition to Calgary and are expected to play a passing game much like that of TSS. Lane haven’t played a game yet this season but Rovers are heading into the match with a little knowledge of what to expect from their opponents.

“I am expecting a Spanish twist to American soccer,” Elmes told us. “My understanding is that there are a number of players that are either Spanish with history in the States or they’ve been brought over to play on the team. I believe their head coach goes over to Villareal for a couple of months each year.

“I don’t think we’re going to see angled balls from right full back over the top of our left full back at all. They’re going to look to play through all areas of the field and that frankly suits us. They’ve be very, very technical and probably difficult to get the ball from. When we get it, we’re going to have to keep it, because when that happens it’s very hard to get it off of them.”

Friday’s home game must have felt like a long time coming for everyone at TSS. An idea built over drinks and the Tragically Hip has developed into a reality and a fully-fledged football club. But now it’s here. So what does this moment mean for Elmes personally and what’s going through his mind as the club heads into their home opener?

“Just walking in here tonight [for training], holy smokes,” Elmes said. “I played here a lot over the years, as a kid and as an adult as well. I’ve tried to picture May 12th from since December, when this things really started to get legs and it looked like it was going to happen.

“Super excited. I hope that there’s a big chunk of people here enjoying it, and I hope that we, regardless of the result, we put on a good performance. Somewhat sleepless nights over the next little while. Lots to do. A long list of things. It’s like our first game last week. Until you do it, you don’t go ‘it’s okay, I get it’. That’s how some of the players are going to react. Until we do this, in Swangard Stadium, and all of the things that need to go on to make this presentation as good as possible for a semi-pro under 23 league.

“I’m sure there’ll be lots of notes taken over the course of the night and we’ll probably be scratching our heads when it’s over, going ‘why did we do that?’. Like the team, the actual presentation in the stadium is going to take a couple of games to kind of find its legs. There’ll probably be some silly things that go on on Friday night that’ll make us go ‘wow, I didn’t even think of that’.

Kick off is at 7pm. If you haven’t already got your tickets yet, then head over HERE to remedy that. Tickets will also be available at the gate and will cost $10 for adults and $7 for children (plus applicable taxes). It looks like it’s going to be a nice, dry and sunny evening, and there’s a tailgate in the park with Jay Demerit beforehand, so PVR the ‘Caps in Houston and head along. Football’s back at Swangard. Support Local Soccer.