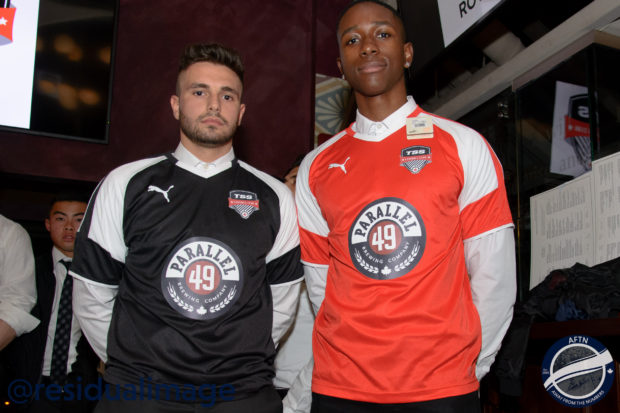 It’s just four weeks until TSS FC Rovers play their first ever PDL match when they head east to take on Calgary Foothills on May 5th.

There’s still a lot for the TSS guys to do in that time, and you can be sure the next month will fly by at a seemingly alarming rate for Willie Cromack and Colin Elmes, but everything’s starting to take shape and Friday night saw the club’s launch event.

Nearly two hundred people from the local soccer community packed into Mahony & Sons at Stamps Landing down by the water in Vancouver for TSS’ Founders night and jersey launch event.

The night saw the first announcement of just who will be playing for TSS FC Rovers this upcoming season, with sixteen of the squad in attendance.

It’s a young, exciting, and all-Canadian squad consisting of Whitecaps Residency alumni, SFU and UBC players, returning NCAA guys, and other local talent, many of whom have previous PDL experience with Calgary Foothills, Kitsap Pumas, and Victoria Highlanders. 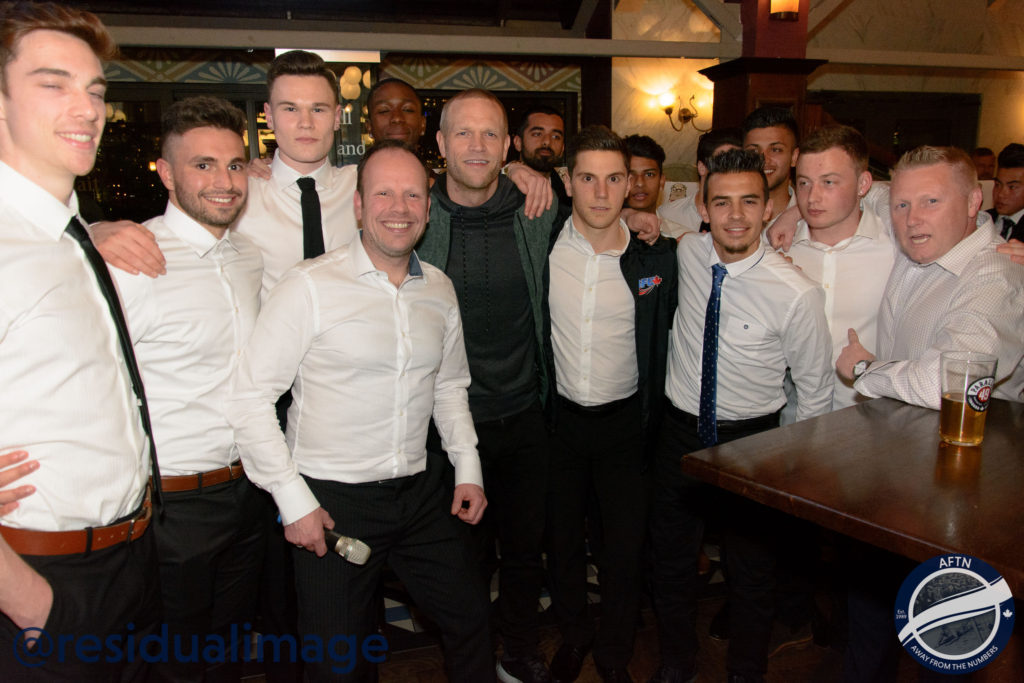 There will be six Whitecaps Residency alumni on the squad including Andre Baires, Vaggeli Boucas, Patrick Izett, and Marcello Polisi (the two others we won’t name just yet as they’re still waiting the final league approval).

Polisi (whose brother Matteo is also on the team) spent last season with the SFU Clan and he’ll have a couple of his teammates on the team including Michael North, who played PDL last season with Victoria Highlanders, and the electric midfield prospect Mamadi Camara, who spent last summer training with WFC2 and is definitely a player to watch.

The Clan’s captain last season, the now graduated Ryan Dhillon, will also be part of the Rovers squad, after spending preseason with WFC2, where he did well, scored two goals, but inexplicably wasn’t offered a contract.

UBC Thunderbirds will also be represented on the squad, including former PDL Goalkeeper of the Year Chad Bush. Having previously been with Ottawa Fury before heading back to school, Bush will be the main man between the sticks for the Rovers. It’s a fantastic signing for the team.

We’ll bring you full details of the squad and player profiles over the coming weeks.

Pride of place at the event was the official launch of the first home and away TSS jerseys (modelled in our lead picture by Vaggeli Boucas on the left and Mamadi Camara on the right, the first two players signed by TSS) and the announcement of their new shirt sponsor – Parallel 49 Brewing Company.

It seems to be a marriage made in heaven, with the colour schemes and artwork fitting perfectly on the TSS strips. Parallel 49 will also be the official beer supplier for the Rovers’ matches at Swangard Stadium, and it’s great to see a local craft beer brewery involved with the team.

Overall, it was a fun night, with a lot of excellent football chat to be had. You can see some video from the night below, including the squad introduction, jersey reveal, and some words from Jay DeMerit, a member of the TSS Board of Directors, who started his pro playing career in the PDL.

As many of you will already know, AFTN are official media partners of TSS Rovers for their inaugural PDL season and will be the commentary team on the streaming of all of their home matches.

We’ll be bringing you full profiles for each player over the rest of the month, along with a number of other interviews and articles, in the build up to the season opener. We’ll have at least one, often two, articles going up every day, so make sure you check back regularly.

In the meantime, here’s the rest of Tom’s photos from the night.

TSS FC Rovers home opener is on Friday May 12th against Lane United. Season tickets cost only $70 for seven PDL matches and a marquee friendly. If you haven’t got yours already, then click HERE to get your season or individual tickets. #SupportLocalSoccer