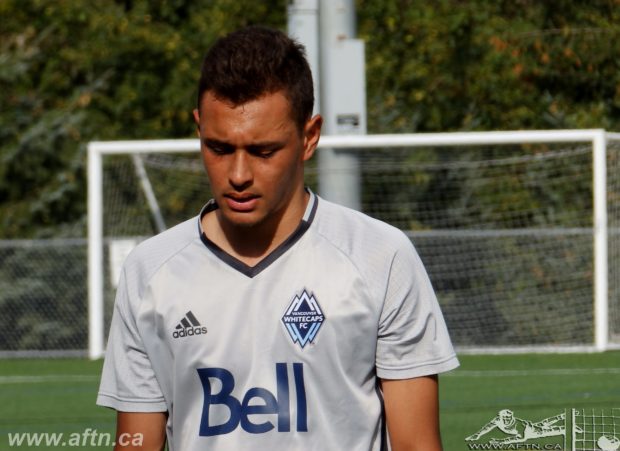 Ethan Gopaul may be a new player with Vancouver Whitecaps’ U18 team this season but he has a distinction no other player on the team has – he is the first player to join the Residency team from the Whitecaps FC London Academy.

After having a chance to watch the Whitecaps vs Toronto FC at BMO Field last year, and meet the team and coaching staff, it has been quite the journey for the highly rated Gopaul.

So far this season Gopaul has posted three goals in 13 games for the Northwest Division leading Whitecaps U18 side. He hasn’t scored the number of goals he would have liked so far, but after a cross-country move, meeting new teammates, and settling in a new city and surroundings, it will take time to adjust. But the promising signs are there, and Gopaul grabbed a brace in Saturday’s 6-0 win over Santa Cruz Breakers.

Before he lights up the net for the rest of the season, with an eye on a future Whitecaps 2 contract, Ethan gave time to AFTN to kick off year two of the AFTN Residency Ten Count interview series…

AFTN: You made the move to Vancouver in August 2016, how are you liking the city so far?

Ethan: Vancouver is great. I like living out here a lot. I was fortunate enough to go sightseeing in my first couple weeks here back in August with my mother and it was beautiful. We walked around Vancouver, went to Squamish, Stanley Park, and the Capilano Suspension Bridge. I’ve seen some amazing things here that I’ll never forget.

You are the first player to move to Residency program from the Whitecaps FC London Academy, what does that mean to you?

Being the first from London is a huge honour and a blessing. I’ve played with that group of guys in London since I was seven years old and there’s a lot of talent in that group. Making it out here was something we all wanted and I’m humbled to be representing them every day because without them this wouldn’t have been possible for me. There’s tonnes of younger talent in London as well and I was fortunate enough to help coach them. I see a lot of bright futures in them. I wouldn’t be surprised if more young Londoners go through what I’m doing some day.

What aspect of your game do you feel you need to work on the most to improve and make the jump to USL?

To me, consistency is huge. Learning and mastering how to play at your best on an everyday basis is a skill the best players have. For a while, I had some troubles with inconsistency and it was definitely hindering to my improvement at times. But I’m confident in my abilities and I know I possess some great qualities that can get me to the next level. However, inconsistency is something that can get in the way of me making the jump to playing at the professional level, but I work every day to be the best player I can be, and by doing that, the mindset and consistency will all come naturally.

What is the strongest part of your game?

My speed, endurance, and dribbling ability. Being a winger, my biggest joy is running past and beating defenders with pace and skill. I’ve always loved running since I started playing soccer. Running fast and long was something I always did, and still do. I use that to my advantage in games because making fast runs and taking on players at speed is one of my favourite parts of the game. I have lots of energy on and off the ball and it takes a while for me to run out of gas, so I can constantly keep going at it every time I get the chance.

You have said your goal is to sign a USL WFC2 contract then to move to the MLS Whitecaps. What would being a professional soccer player mean to you?

Becoming a professional soccer player would be a dream come true. Whenever my elementary school teachers would ask what I want to be when I grew up I would always have the same answer; a pro soccer player. Since I was young I would always tell everyone that I’d be a pro one day. Now I’ve seen and been in that kind of professional atmosphere and know that It’s extremely tough. It’s something we’re all pushing to be here and it’s a really competitive environment to be in. I’m working hard every day to achieve this goal of mine to play professionally with the Whitecaps. But, no matter what happens to me in my time here playing in Vancouver, I will never stop chasing my childhood dream! 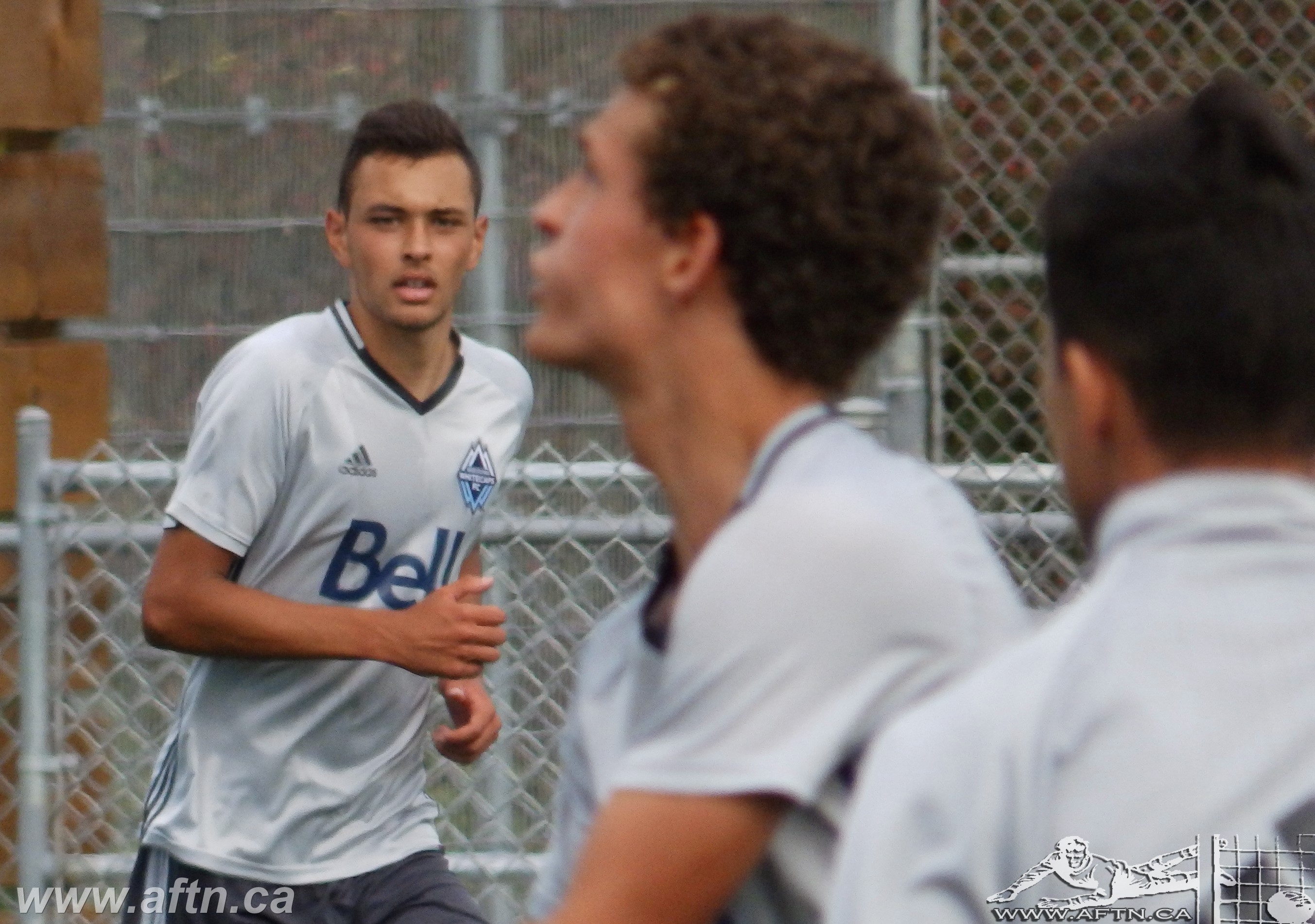 Who is the most skilled player you have had a chance to play against?

This is a hard question to answer because I’ve played against so many skilled players. Alphonso Davies is always a fierce competitor to play against and I’ve played against him in training sessions and inter squad matches. He’s just a cut above the rest. Also, Ballou Tabla who currently plays for Montreal Impact. He was exceptional when we played against each other at the National Championship in Alberta 2013/2014. He was a step ahead of everyone and top class when we faced each other and I knew he was going to be a professional somewhere one day.

And who is the most skilled teammate you have played with?

This is also a tough question. I’ve had lots of talented teammates but the most skilled is my older brother Chad Gopaul. He’s two years older than me. Him and I had always been so close growing up and we still are closer than ever. I was called up to play with his team many times growing up and he never failed to amaze everyone watching; myself, parents of both teams, and even the other coaches. He did things that just made you say WOW that just happened… And that’s what made him a special player. He brought out the best in me also. I would always play my best when it was with him and I learned everything from watching him and playing with him. I learned lots from my older brother and because of him I got to where I am and I am the player that I am today.

You list Neymar and Ronaldo as your favourite players. Who is better of the two?

Cristiano Ronaldo was my biggest inspiration when I was young. He was the reason I wore number seven since I started playing. Then when I came across Neymar I loved watching him play too because he reminded me of Ronaldo back at Manchester United. Right now Cristiano Ronaldo is the best and has proved to be one of the greatest ever. They’re very similar players but I have to say Neymar is well on his way to be better than CR7 one day!

If you could play in any stadium in the world, what stadium would it be?

My dream stadium is Old Trafford. Playing there would be surreal. I would always watch United play on TV and just dream of playing in that stadium. I was lucky enough to go inside and get a tour of Old Trafford when I went to England and that’s something I will never forget.

Where do you see your soccer career in five years?

Five years from now I see myself playing as a professional. Whether it be with Whitecaps in the MLS, or another team somewhere else. Everyday I’m growing and developing and I feel like playing as a professional player is in my future somewhere. Where I’ll be playing is something I don’t know! Things can change at any time, so wherever my abilities can take me, that’s where I’ll be. I want to play at the highest level of competition possible for me and in five years that’s where I’ll hopefully be.

Thanks to Ethan for taking time to chat with AFTN. Make sure you give him a follow on Twitter – @EthanGpaul.