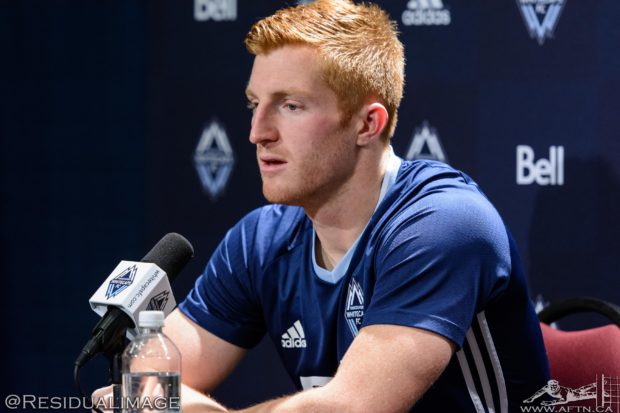 It was a chance for Vancouver Whitecaps to play at the world famous Yankee Stadium in New York city. Like many away opponents who have had the chance to play there, it was a game to forget for these ‘Caps.

By looking at the makeshift pitch in the stadium you could tell that the narrowness of the field is something it would take the team part of the game to adjust to. The full backs, who Carl Robinson likes to attack down the wing, had less room to do that, Kekuta Manneh would not have the space to try and run down the wing around the NYCFC defenders, and David Ousted would have to get his timing right on the crosses that would come into the box quicker because of how close the sidelines were to the box.

Before we put this game behind us and move on to the Cascadian clash next weekend with the Portland Timbers, let’s take a look at The Good, The Average and The Bad: Rotten Big Apple Effort Edition…

With 300 friends and family members in the stands for his homecoming game, the solid centre back really stepped up his game. With his usual pairing partner Kendall Waston missing the game due to his red card from last week, Parker was a leader in the back line.

He was calm, cool and collected when there was a scramble in the defensive box and stepped up his physical play with the NYCFC attackers.

Parker is on a nice run of games lately but look from him getting a rest in some of the upcoming games, maybe even sitting on the bench next weekend against Portland.

I will be the first one to admit I have been critical of Rivero’s lack of offensive output this season. I have called for him to be relegated to the bench to give him a much needed kick in the ass on more than a few occasions.

The argument I always hear is he does so much else right on the pitch other than scoring goals. Ultimately, all that matters is you score goals at his $900,000 DP striker salary. That is why he was brought into this team.

This game he was gifted a goal thanks to some hustle from Mezquida leading to a deflection and setting the ball up for him in front of a gaping goal. And still he made it interesting, knocking it off NYCFC keeper Josh Saunders. The great thing about soccer is sometimes by being lucky and getting an ugly goal is what a player needs to go on a goalscoring run. Look at what happened to Manneh against FC Dallas, he got a ugly own goal off a deflection and the same game he scored the 3-0 goal to put the game away for good.

Rivero even had a decent chance that he missed due to a bad first touch later on in the opening part of the game, before heading off early with an ankle injury.

Let’s hope he can go against Portland next weekend, as it looks like Carl Robinson will continue to hitch his wagon to Rivero starting if he is healthy moving forward.

Robinson has always been a big fan of squad rotation. When the season is as long as it is, with a short amount of turn around between some games, it is something that he has to do. Especially with three games in an eight day spell. But often, it can be a problem when you make too many changes at once.

Making three changes to the back four, one that is coming off a win and a draw, is rarely a change that you will see success with. His hands were tied with Kendall Waston missing the game due to his suspension from the two yellow cards he picked up midweek against Sporting KC, and Fraser Aird picked up a knock in training.

It might have been a good choice to leave a veteran like Jordan Harvey in the starting XI to help maintain calm and order in the back line. Pa-Modou Kah is a veteran but he is mistake prone at least one time a game and this game his mistake cost the Whitecaps the opening goal against by Villa.

Also when Blas Perez came in for the injured Octavio Rivero, it looks like Robinson asked Perez to play the false 9 role on the pitch. He was playing too far back in my opinion while being the lone striker on the pitch. Perez is great at the position when he has a striking partner up front with him, but when he is the only striker it just takes away space from Nicolas Mezquida, who excels in the central attacking midfield spot on the pitch.

A manager’s job is to put the players in the best position on the pitch to make them successful. I don’t think Robinson did that in this game.