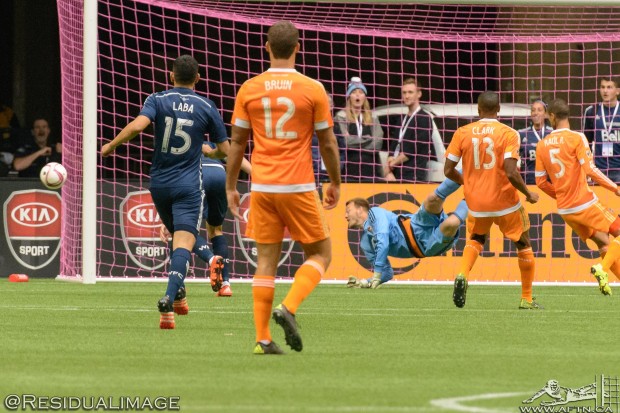 It’s almost been forgotten in all the Canada v Mexico hullaballoo this week, but Vancouver Whitecaps are at home in an important Western Conference clash against Houston Dynamo on Saturday night.

Who knows the reason why, since their starting line-up from last week’s win over Seattle has been decimated with the loss of four starters to international duty, and the already bare bones squad has injury concerns on key back ups.

It’s going to be a tough one for the ‘Caps handling that fast paced Dynamo attack. Here’s our preview.

Woo! The ‘Caps came back from Seattle with the first three points of the season. It surely was an interesting way to get the win, and we required a bit of luck in my opinion to get through that game unscathed. Even sweeter, it gives us the lead in the Cascadia Cup. Now that the ‘Caps have three points in the bag, they will be looking to get the first home win of the season, and that won’t be easy this weekend.

Vancouver will hopefully be riding high after the victory in Seattle. Although the win was not pretty, and they still have not scored from open play, there were still some positives.

Switching to a 4-4-2 formation, they seemed to be able to bring Blas Perez into the game. The long ball plays were much more effective with the huge Panamanian being difficult and giving flick-ons for other players. The backline looked much improved over the first two games as well! A question will be if they can keep that formation (and chemistry); with all the absences. It could be tough.

On the flip side, Houston Dynamo are coming to town as an offensive force. They have scored 11 goals in three games! I look for them to score, because they like to get forward and create, but they also will pounce on any chance the Whitecaps will let through. Houston’s backline seems to be in shambles, having let in 7 in those three games. So it may be possible that the Caps will finally score from open play in this game.

Certainly has the makings of a very open end-to-end encounter.

Robinson is going to have some difficult decisions to make this game, especially considering the amount of injuries (Dean and Teibert are still out, Kah should be ok but could still be out) and international absences (Parker with the US U-23, Waston and Bolanos are with Costa Rica, and Perez is with Panama).

The line-up will be hard to nail down, but so will the formation: does he stay with the 4-4-2 or go back to the 4-2-3-1? Perhaps he tries something more exotic, like jamming 5 in the back to try and stop the red hot Houston offence? There are many interesting things that could happen this week.

We will start with the formation. There was a spirited debate amongst the View from 202 lads this week! Does he stay with the 4-4-2, or change back to the 4-2-3-1? We shall discount any fanciful 5-3-2 formations as we don’t really have the players for that kind of formation this game.

What are the benefits of the 4-4-2? For starters, it looked solid, and brought Perez into the game while creating chances for others. Not only that, it was defensively solid against everything Seattle had to throw at it. However, most of the benefits of the 4-4-2 come from players that are not going to be there: Waston, Parker, and Perez. As for the people who could step in, Kah is either just recovered or still recovering from injury, and the rookie Cole Seiler is untested; in a pinch even the new signing Andrew Jacobson could perhaps drop back into that role. While up top instead of a target man, we could put the poacher Masato Kudo in for a full 90 minutes. As interesting as it would be to make Octavio Rivero have to play as the target man, he has not looked comfortable with his back to the goal.

Because I don’t think we have the players to play the 4-4-2, I suspect that the Whitecaps will revert back to the 4-2-3-1. It will give the defensive part of the game a bit of a boost with two defensively minded midfielders.

Starting from goalkeeper: Ousted will obviously get the start. He was great when called upon and there was nothing he could have done about Ivanschitz’s well placed free kick.

Up at the top, leading the line will be Rivero. He was okay against Seattle and I think playing with Perez alleviated some of the burden on him, however he should be on a tight leash this game. If he is not producing we should bring in Kudo and give him some quality minutes to show what he can do in the striker’s position.

With Bolanos out it will be interesting to see how the attacking midfielders are going to stack up. I absolutely loved seeing Morales as the deep-lying playmaker spreading balls all over the pitch. It uses his best strength, which is his long range passing. He was able to get enough defensive work in as well. But for this game he will slot back into the more roaming playmaker role in the center.

I didn’t like Manneh much in the last game; of all the ‘Caps he was the most invisible going forward. Perhaps it was because of his heavier defensive responsibilities, but it does seem that he has lost a bit of his pace or acceleration (maybe he is still suffering a bit of an injury). But given the lack of options we have, he should get the nod again.

As for on the other wing, look for the ‘Bug’ to start this game. Hopefully he has regained some of his fitness by Saturday. Be on the lookout this game for Froese (who may be a doubt and has been training off to the side at times this week), Bustos or Kudo to come in as sub on the wings. This could be an opportunity for them to get some minutes.

As we move back, things get interesting. It will depend on how absences and injuries play out. One thing is for certain: Harvey and Aird should be getting the start this game. Harvey looked good on both sides of the ball in getting forward and defending. Aird should be applauded for upping his game so well (he made four tackles and was switching and communicating with Waston superbly). He was also picking his runs forward and was not out of position as much as in the first game.

Next will be the defensive midfielders. Laba should definitely be there (congrats to Laba on being voted as 2nd Most Underrated player in the MLS in the ESPN players poll!) He played better, but I feel there may be a bit of learning curve for him with the 4-4-2, so he should feel more familiar in this role.

Now it gets very interesting. It depends on who is injured or not: if Kah can play he should be starting at center back with the rookie Cole Seiler. However if he is out then I would not be surprised to see Andrew Jacobson start there. There is even an outside chance of Harvey moving in to the middle of the defence and Adekugbe coming in at left back.

If Andrew Jacobson starts there we could see Froese starting next to Laba, if he is good to go. I would not mind seeing what progress he has made. With his surging runs, hopefully we can add an extra body to the attack.

However, if Kah is healthy I would look for Jacobson to be the box-to-box midfielder starting next to Laba. Because of the backline being somewhat thrown, it will be very important to have the defensive midfield working well to contain any attack to the top of the box. They will also be called upon to make sure Will Bruin doesn’t get the ball in any dangerous areas from which he can start an attack.

Speaking of Houston, if we look at the team, they are currently without their star playmaker Maidana. That said, it hasn’t stopped them from putting balls in the back of the net! Lots of the play they have had in the offensive side of the field is going through Will Bruin. He comes deep, gets the ball, makes a pass, then will get in the box and put away any opportunity he gets. Not only that, but he can act like a target man and bring down balls. Another dangerous player could be Andrew Wenger, he has also been great these first three games. If he switches to Aird’s side we could be in for some trouble. He likes to cut in and shoot, but he can make smart passes as well.

Burin, together with the rest, are riding this hot goalscoring streak so far. They don’t mind playing wide with crosses whipped in, nor do they mind cutting in and taking shots from a distance. Right now it appears there are many ways they can score (even off of set pieces). But for all these goals they score, they are still having some trouble in the back. They are letting goals in off of set pieces (which the Caps have been great at this season), and are terrible at protecting a lead.

This game may just come down to who can put more in the back of the other team’s net (I would bet on Houston doing that), or who can organize their defence better (normally I would be on the Caps’ side, but we have a number of question marks in the backline right now).

Will the makeshift backline hold against a hot Houston team?

Just who will be the centre back pairing: Kah/Seiler, Kah/Jacobson, Kah/Harvey or is Kah not even able to go?

Does Kudo get a first start and if so, will it be as a right winger?

Will Bruin. This man is on fire, 3 goals and 2 assist in 3 games. Can this be his breakout year into stardom and does the Whitecaps defence have enough strength and discipline this week to hold him off?