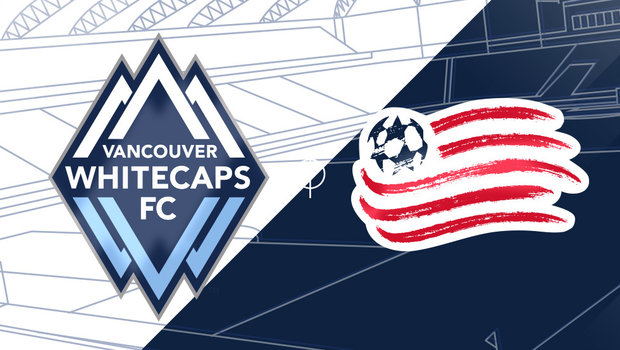 Soccer is back at BC Place this weekend after a few days off for the Vancouver Whitecaps players!

Vancouver finished off the pre-break fixtures with a resounding 3-0 win against Ottawa Fury to advance to the Canadian Championship. That game will live long in my memory, it was spectacular right from the second minute when we won the penalty to get things going. Octavio Rivero and Nicolas Mezquida were in great form, and Paolo Tornaghi of all people was in the ‘Man of the Match’ discussion. It was hard not to get a little carried away as we went into the Copa America break. That’s what this sport can do to you.

You can see why many fans are optimistic as we get the MLS season moving again on Saturday at BC Place.

New England have not been performing consistently this season and sit third from the bottom in the Eastern Conference, albeit only a couple of points off the play-off places. Their form has been somewhat stuttering of late; while they have beaten Seattle and Chicago in recent weeks, they have losses against LA and Dallas sandwiched in between those good results.

What this really tells us is that two teams could show up on the weekend: Good New England or Not-So-Good New England. It’s worth noting that the Revs went to extra time midweek before coming out on top against our old friends the Carolina RailHawks. Hopefully they are nice and fatigued by that 1-0 US Open Cup win.

The Revs play the lesser seen 4-1-4-1. It may sound like a conservative tactic at first, but on its day it can be very difficult to deal with.

The four midfielders tend to push high up the field. The dynamic play of Nguyen, Rowe, Fagundez and Agudelo drop in and out of the gaps between the midfield and the defenders, before turning and causing all sorts of problems with through balls. Getting these players consistently into these pockets of space is a big reason why this club has been to a MLS Cup Final in recent years.

This can be hard to play against as it can’t be solved by simple man marking. A well drilled zonal system is needed to efficiently combat the barrage of short passes. Not many MLS teams can defend, let alone play a complex zonal system. To make matters worse, if the short game isn’t working, they have one of the most proven MLS target men in their ranks: Kei Kamara.

Will it be weird with Kamara? I was quite excited about his prospective transfer to Vancouver, but the more I thought about it, the more I thought it might not be a good fit. Kamara is a prickly character, not something you want in a young team that is building an identity in a market that doesn’t hold back the criticism. Kamara hasn’t scored a MLS goal since making the move to New England.

Despite the lack of goals from Kamara, he is a very real threat. He is deceptively fast and unbelievable in the air. We need our two centre backs (likely to be Tim Parker and Andrew Jacobson again with Kendall Waston starting the first of his two game suspension) to be alert to both aspects of his game. It can be a dangerous game, seeing as their midfield can be so fluid that the centre backs could get drawn to them, thereby freeing up the striker Kamara. The midfield will need to be compact and intelligent. Matias Laba will be key to closing down out of possession.

Who to play alongside him? I would favour Russell Teibert. He can close down the spaces around Laba very well and could counteract the fluid midfield four. With Pedro Morales also suspended, Nicolas Mezquida should get rewarded for his fine performance in the Canadian Championship in the number 10 role. Kekuta Manneh and Cristian Techera would be my favoured wingers, but Christian Bolanos could also start if match fit after his side exited the Copa America at the group stage. Robinson is likely to give him a little more rest and start the Costa Rican on the bench however.

Up front, with Octavio Rivero suspended, it’s a toss up between Erik Hurtado and Blas Perez to start up front in our 4-2-3-1. They are the only options left with Masato Kudo still out injured.

Perez missed Panama’s last Copa America match through suspension, so it well rested and was in excellent form in the tournament, scoring twice in his country’s win over Bolivia. Will Robbo give him the nod to start. He should, but again, he may choose to rest him after his travels and keep him as a sub around the hour mark. Hurtado and Manneh have a good understanding, so the ‘Caps may choose to exploit that.

The Whitecaps game plan should be to control the midfield by moving the ball quickly when in possession. This side can hurt an opposition that are careless in possession.

It would also be nice if nobody got sent off. Maybe that’s asking for too much!

Can the Whitecaps be effective in and control possession?

Will the ‘Caps manage to get through this game without adding to their suspension woes?

Will Robbo be too devastated by the Welsh defeat to England to coach?!

Lee Nguyen – don’t judge a man by his hair, Nguyen can be very slick on the ball

THE VIEW FROM 202 CREW’S PREDICTION: