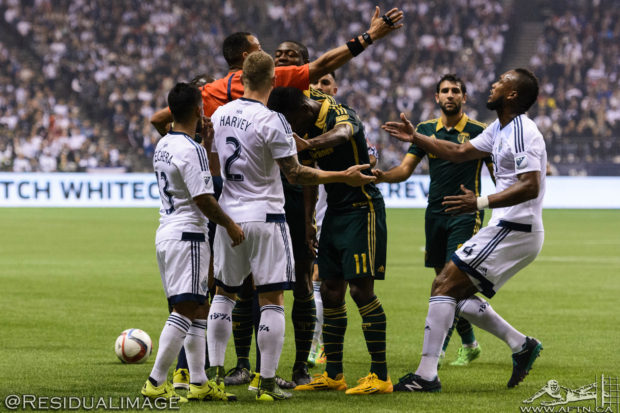 Vancouver Whitecaps are coming off a tough week after dropping points at home to Sporting KC and their loss to New York City FC. Will they be able to bounce back? It certainly would be enjoyable to get some gloating rights over Portland (the current MLS Cup Champions). And with the way both teams have been playing, who knows which team will turn up on either side.

Vancouver are coming in to this one off a hard week. A tie at home, and a loss away. It could be argued that their largely rotated backline was always going to be a dangerous gamble, and this time it didn’t pay off.

On the plus side, the ‘Caps have seemed to figure out how to score from open play, doing it twice (technically)! It has been a mixed bag, so the ‘Caps will look to make sure they want to bounce back in front of the BC Place faithful and secure some precious Cascadia Cup points.

Portland is coming into the game with a draw on the road against the ever dangerous Revolution and a home win against a TFC side looking to make a Supporters Shield run.

Portland has continued to try and hit teams on the break this year, and so far the results have been mixed. But they always seemed to get good results last season traveling to BC Place. Last year’s playoffs were not pleasant for us Whitecaps fans. Hopefully that is some motivation for the Whitecaps squad this time around.

This year, and in a way since the playoffs, the Timbers have been looking to hit teams on the counter. They prefer to get the ball centrally to Darlington Nagbe, then they let him make space for others. However if that doesn’t work they have lightning quick wingers to hit you if your fullbacks press too high (warning to Fraser Aird!). They have Lucas Melano, Dairon Asprilla, and mercurial former Whitecap striker Darren Mattocks (who will be motivated to show he has a scoring touch).

Defensively, the Timbers will likely set up very deep in their own end. They will rely on the experience and physicality of Nat Borchers and Liam Ridgewell to make sure they won’t concede. By sitting deeper they will hope to open up more space behind the Whitecaps for a deadly pass, or a fullback pushed too high that they can take advantage of. Plus they have Diego Chara to patrol in front of the back line.

The job got a bit harder for the Whitecaps with Kekuta Manneh being told to sit out by the MLS Discipline Central Politburo. Not much we can do about that. But this reduces some of the nice pace and his recent production out of him.

I really think the backline is a no-brainer of Fraser Aird, Kendall Waston, Tim Parker and Jordan Harvey all starting. We showed in NYC what can happen when you take a gamble and change the chemistry of the backline. The ‘Caps were on the back foot for large parts of the game, and really only were in the game due to a goalkeeper error; their second was thanks to Manneh’s pace (which we won’t have). Part of being on the back foot was the poor defensive understanding between all the new pieces.

One thing to note is the Timbers have an injured first choice keeper, so New Zealander Jake Gleeson has been stepping in. So far he has looked like a wall, stopping everything. They may just try to ride a hot keeper, coming off a MLS Player of the Week performance.

David Ousted continues to be the best player for the Whitecaps; he will get the start. Not even worth mentioning really!

Because we lack the pace, and there are still questions about Pedro Morales’ health, I actually think it would be best to play Nicolas Mezquida in the attacking midfield role. If we don’t have pace, Morales’ long balls will essentially be wasted because we can’t seem to get Octavio Rivero the support he needs, so the midfield needs to be closer to him, if he even recovers in time from his ankle injury.

Mezquida has done this, plus they seem to have some chemistry, so let’s keep this going and see where it can take us. Also I would note that Mezquida is much better on the defensive side of the ball, harrying and harassing ball carriers in the back. Dallas a couple of weeks ago punished Portland for that; we should try and emulate that with Mezquida and Rivero’s work rate to create some good turnovers close to the Timbers goal.

For the midfield I would continue to go with Matias Laba and Andrew Jacobson. Both will need to be on their game to battle the likes of Diego Valeri and Nagbe. Seeing that they are each defensively-minded, this may also help prevent any of the breaks that Portland likes to get.

The wings should be Christian Bolanos and Cristian Techera (in place of Manneh). Bolanos has been getting better and better in recent games and he is going to need to be at his best to help the ‘Caps win against the Cup-winning Timbers.

Will Pedro Morales be able to play and if so, will Carl Robinson go with both him and Nicolas Mezquida in the starting line-up?

Will the ‘Caps be revved up to show up the MLS Cup Champs?

Will Octavio Rivero recover from his ankle injury and lead the attack or will Masato Kudo get another chance to show why Robinson signed him?

Darlington Nabge – dynamite on the ball. He’s going to punish you if you don’t shut him down, or keep him off the ball.