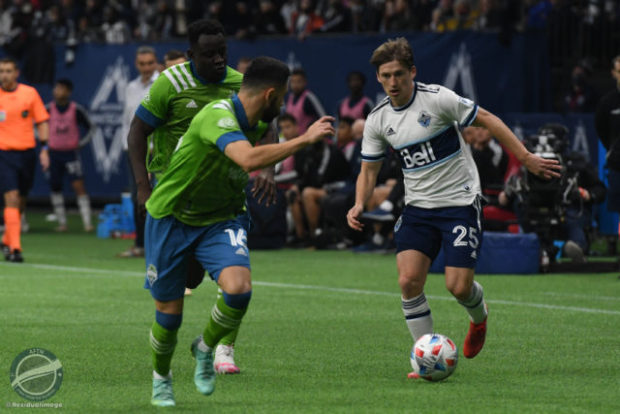 Can you feel it? The change in the air. The sense that it might be worth being a little optimistic. The jingling of the playoff bells heard faintly on the horizon. Yes, after an absolutely horrid start to the year the Whitecaps have slowly started to climb the standings and are now just a single point outside of the playoff places.

The fact that there is still over half the season to go means there is still plenty of time for things to change for the better or for the worse. Hopefully, with an increasingly full squad, it can be the former for the ‘Caps. Tuesday night will be a steep test, on the road against Seattle.

This means that (knock on wood) in the next couple weeks Vanni Sartini will be able to choose from more or less the full squad that the club has assembled, which will be a good test as to what kind of potential this team might have for this season.

Cubas won’t be starting against Seattle, but he will be starting soon. And the new formation tweak from the last couple games, moving from what was usually a 3-4-1-2 to more of a 3-1-4-2, would allow Cubas to slot into the number six role. That position is currently occupied by Florian Jungwirth, who while not a long-term solution there has provided an unexpectedly solid presence in the middle of the park.

The most interesting question with this tweak is where exactly Ryan Gauld lines up, whether as part of the midfield trio or as one of the front two. When he came off the bench in the last match against RSL it was the former, which I feel would be the best move. He works enough defensively to play a little deeper (especially with Jungwirth or Cubas covering for him) and having more attackers ahead of him gives him more options to drive the play forward.

With Lucas Cavallini wrapping up national team duty Monday night in Honduras, Brian White will be starting up top. Unless Gauld is up there next to him it’ll be either Dájome or Déiber Caicedo helping lead the line. Caio Alexandre, fresh off his return to action after around a year, will be battling Sebastian Berhalter for.one of the starting spots in the middle of the park.

At the back, until Blackmon returns the most likely trio is Ranko Veselinović, Érik Godoy and Jake Nerwinski. Javain Brown is also an option, as well as an option for wingback, although Marcus Godinho has had some decent performances there as of late and Ryan Raposo has been on his best run of form in his ‘Caps career.

Looking at the hosts, Seattle has gotten off to a slower start to the year, as we’ve become accustomed to seeing. They currently sit 11th in the West, one point behind the ‘Caps but with two games in hand. They have not played since May 29th, when they beat Charlotte 2-1. Since they were bounced out of the US Open Cup in a penalty shoutout over a month ago they’ve won three of their last four matches in MLS play.

The Sounders have not been firing offensively to the level you might expect so far, with just 15 goals on the season. Newcomer Albert Rusnak is still yet to record either a goal or an assist, and Raul Ruidiaz and Jordan Morris share the team lead in goals with just three.

This is the second Cascadia match for the Whitecaps, and if they are to get their hands on the cup this year, they need a result in this one after losing to Portland earlier in the season. Coming out of the international break and continuing the brief run of form they had before it would also be great to see.