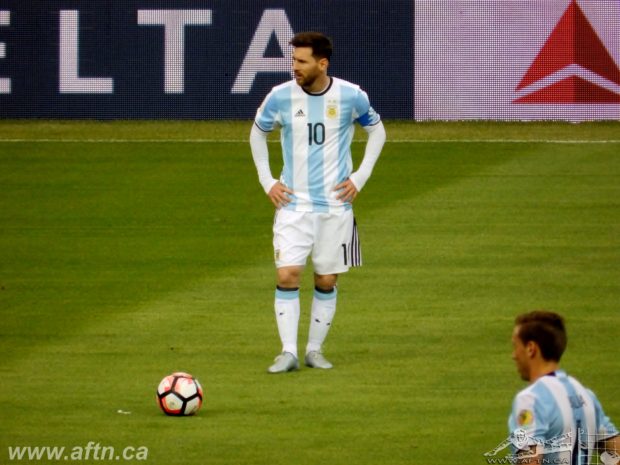 Tuesday evening wasn’t the first time that Lionel Messi has played a game in Seattle, but it was the first time he’d played a competitive match there, and an excited 45,753 crowd eagerly came along to Century Link Field to see it.

Messi has come to Cascadia once before, in 2009 for a friendly for Barcelona against Seattle Sounders. He played the first half that day, scoring two goals before being subbed off at the break, his job done for the night.

Seeing a player like Messi play in a meaningless friendly is one thing, but to see him in an actual meaningful match is another. Well sort of meaningful in this case.

By the time Messi came on this time around, the game was already well over as a contest, with Argentina dominating proceedings against Bolivia with three unanswered goals and an 85% possession stat. Incredible, one-sided stuff.

It was a subdued crowd. They cheered all three Argentina goals enthusiastically and came to their feet in anticipation, especially behind the goal, whenever the team got near or in the box. Bolivia were schooled in that first half and people were watching something of a footballing masterclass.

But as clinical a performance as Argentina put in, the vast majority of the fans were pretty nonplussed. They were just there to see one thing, or rather, one man – Messi.

Argentina coach Gerardo Martino had said earlier that his plan was to play Messi for some part of the match. The fans expected that and tickets were sold accordingly.

But…. putting your star player on in a game that was already over as a contest at the half, was a risk. He’s coming off a back injury, it’s a new grass pitch, the game was getting chippy. Martino though has no qualms, doubts or second thoughts about all that though and true to his word, Messi came on at the start of the second half.

“Regardless of the result, regardless, after the first half he knew that he was going to play for 45 minutes,” Martino told reporters after the match through a translator. “He’s growing compared to the last game, because last game he played 30, today 45. He’s getting more and more confident. That’s what we were going to do regardless.”

Messi had missed the opening group game against Chile as he recovered from a back injury suffered against Honduras in a build up match before the tournament began. That no doubt disappointed many of the fans in the near 70,000 crowd in Santa Clara.

But he made his tournament debut four days later in Chicago in front of 53,885 fans, playing for less than half an hour, scoring a hat-trick and grabbing an assist on a fourth goal. The appearance against Bolivia was more to do with getting him up to full match fitness in preparation for a start in the quarter-final against Venezuela in Foxborough on Saturday.

“I think that having Leo on the bench, and with the difference in the condition that he was able to come in, was different to against Chile,” Martino said. “He was not able to play at all. He didn’t have his shoes on or anything.”

And so true to his word, Messi came on at the start of the second and the stadium, which had been eerily quiet for a lot of the match, suddenly erupted into life, as you can see below.

The crowd stayed that way for the whole of the second half. Sections that had been sitting stood. Those that weren’t standing got up every time Messi was on the ball, which was a lot. Cell phones and cameras were held up constantly. The game had transcended from a football match to a one man show. It’s was all very interesting to watch it play out first hand.

It’s hard to relate what it must be like to have that reaction, that anticipation, that expectation every time you take to a football pitch. The weight on your shoulders must be huge. I’m sure the salary help but what kind of personal and mental toll it takes on the player would be an interesting analysis.

Martino says Messi isn’t fazed by it. He takes it in his stride and has now become just a part of his everyday life. Welcome to the Messi Show.

“This is what happens,” Martino said of the Seattle crowd’s reaction. “People want to see him. People pay all over the world to see him. He has to deal with that. Sometimes he has to play or sometimes on the bench, but he has that obligation to fulfill and follow through with the fans who are paying for him to be there. So he understands that and he lives with that.”

How well he lives with it opens up a whole different discourse, but Messi certainly put on a show for the crowd. There was the free kick that was tipped over, the amazing ball control and the constant danger. No goals, but there was this.

It was offside and he’s been accused of being disrespectful, but the crowd lit up when he did it. Even the Bolivian goalkeeper Lampe said he’d have hit any other player that did that to him.

I’ve never been one to get caught up with the individual talents of one player. It’s a team game. I’d not pay to go see just one guy, like some of the fans do at BC Place when opposition players come to face the Whitecaps. But that said, it was a joy to watch Messi on Tuesday night, and be able to get down the front and see it all play out up close. You got totally caught up in the rest of the crowd’s excitement.

The roadshow now moves on the Massachusetts. Another packed house is expected. It’s been great for the tournament and it’s great for those fans that see him. The challenge that MLS, USL, NASL and others now have is how, if at all, do you turn that enthusiasm for seeing just one man into getting along to see your local team every week.

That one’s for another day.