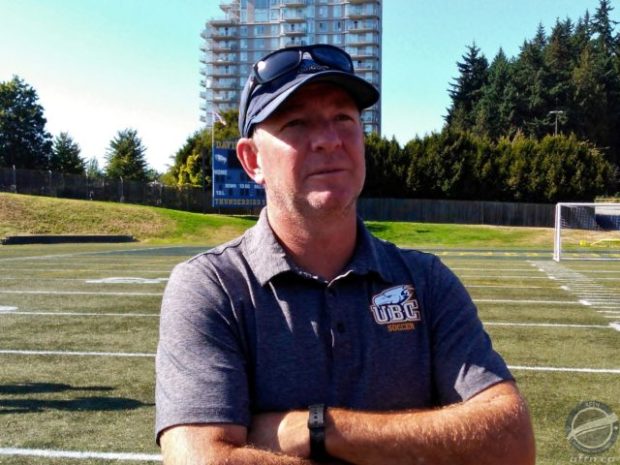 UBC Thunderbirds got their quest for a 14th national title off to a winning start this past weekend with a pair of victories over Canada West Pacific Division rivals.

Mike Mosher’s men kicked off the new college campaign with a 2-0 win at the UFV Cascades on Friday night before returning home to see off Trinity Western Spartans 3-2 in a closer than it should have been encounter at Thunderbird Stadium on Sunday afternoon.

“Two wins against two divisional opponents, rivals, and you put yourself in a very good situation,” Mosher told reporters after Sunday’s win. “That’s what we’ve been able to do the last several years. Get our wins early on, get a little bit of a buffer, and history has sort of shown that a lot of teams take lumps out of each other. If we can keep getting our three points and pull away, then great. But it’s a good start.”

Second half goals from Victory Shumbusho and Logan Chung had seen UBC secure the three points against Fraser Valley on Friday, and when Sean Einarsson had blasted them ahead in the 35th minute against Trinity Western on Sunday, you expected it to be more of the same against a team coming off a heavy 3-0 loss to UVic Vikes in Victoria two days previously.

But full credit to the Spartans, who fought back to level with a wonderful goal from Tristan Torresan just three minutes later, then take the lead five minutes after the restart though a close range Caleb Jemmott header. Those goals finally lit a spark under the Thunderbirds, who came storming back to level from Mackenzie Cole in the 68th minute and then grab a winner from Ryan Arthur with 11 minutes remaining.

A somewhat satisfying come from behind win, but Mosher wasn’t happy that it took so long for his team to get some fire in their bellies.

“It was good character,” Mosher felt. “We battled back to get the result. Disappointing that we got into the situation that we did, down 2-1, but I’m happy with the effort in getting back.”

While happy that his team showed “some decent urgency” after falling behind, Mosher, who is now in his 24th year as Thunderbirds head coach, was disappointed that it had to even come to that, keen to see more of that urgency from the beginning and not just when chasing the game.

That Spartans game did at least provide UBC with a strong test to start their season, something often missing as they go through the regular season with some big victories. It was a much needed test for the Thunderbirds after a challenging preseason in which they struggled to find competitive opponents, a test which hopefully will set them up well for the tougher end of the season and the playoffs.

“Absolutely, it shows your character, some resiliency” Mosher agreed. “We want to get good games. It was a bit of a challenge this year getting as good of games as we would have hoped for [preseason] and we’ve gotten in the past, just with NCAA Division 1 and Division 2 both pushing their league back by a week and with us starting early, there was not an opportunity to get some of those good games like Simon Fraser, Seattle unfortunately pulled out on us.

“Some of those types of games they just weren’t readily available this year and it could probably continue going forward. Getting challenging games in preseason is always important, but we’ve kind of rode through this weekend and two different types of games, but we’ve got six point and move forward.”

It’s been another offseason of change for Mosher, with some big pieces moving on, but some well known names, both coming back in to the program and joining, with a wealth of experience behind them.

Defensively, there’s two important new faces to the UBC squad for the 2019 season, although two very familiar names to football fans in the lower mainland. 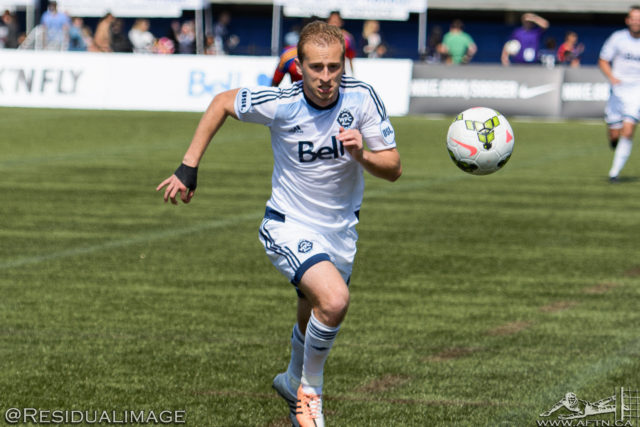 Former Whitecaps Jackson Farmer and Jordan Haynes (pictured above) have joined the Thunderbirds, bringing with them experience at USL and national team level, while goalkeeper Chad Bush returns to the ranks after a year away from the program.

Their experience will be crucial for a UBC side boasting ten first year players and only five seniors. The annual story for the Thunderbirds over the last couple of years has been a strong regular season then a disappointing run at the nationals. It’s been hard to pinpoint a reason as to why that has been, but Mosher is hoping that adding in a veteran presence may help change their fortunes this year.

“I hope so,” Mosher told us. “I thought Jordan was maybe the best player on the field [against TWU]. His energy in the second half up and down, and he got both assists. The experienced leadership from both of them can be instrumental through the year and hopefully into the nationals.

“We want to be stingier defensively. Disappointed we gave up two goals, but we’ve had a good group each and every year over the last many years, but you get to the nationals and all the games are tough. Hopefully that added experience will help us if we get there.”

At the other end of the pitch, Mosher has lost 21 goals with the departure of strikers Caleb Clarke and leading scorer Kristian Yli-Hietanen, who hit 9 and 12 goals respectively, while assist leader Zach Verhoven left college to sign professionally with Pacific FC in the CPL.

That’s a lot of firepower to try and replace and a lot will be expected of both Shumbusho and Cole now to step up and try and fill those shoes. But Mosher is more looking at scoring by committee rather than just relying on one player to come up big throughout the season, and with five different scorers in their first two matches, so far so good.

“Hey, if one guy steps up then great,” Mosher mused. “But I do think that we’ve got a lot of weapons. We can get goals from a lot of places – Ryan Arthur, Tommy Gardner, Nick Fussell, Mackenzie Cole, Sean Einarsson – those are all pieces that I think can contribute and there’s more beyond that. If somebody steps up, terrific, but I expect us to score a lot of goals and I do expect it to be a little bit by committee, or I hope.”