Finally, amateur soccer will be back on the pitches across Vancouver Island and beyond!

The Vancouver Island Soccer League (VISL) is the Island’s largest amateur Men’s soccer league, and there is a full slate of games to get the year started this weekend, with everyone just excited to get back into action, after the stop/start nature of the past year.

Here is a snapshot of the Week 1 games for our top flight – VISL Division 1. 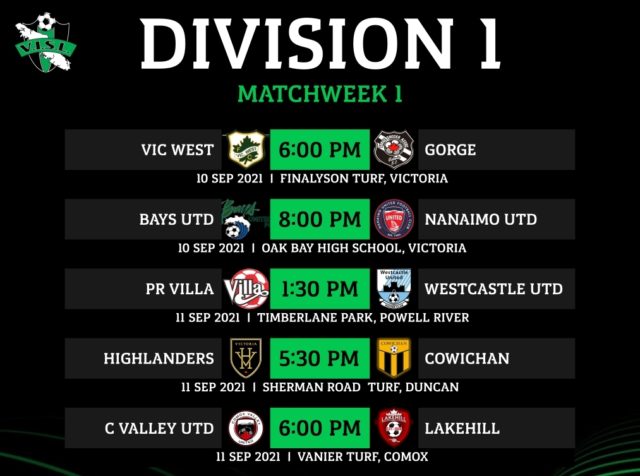 Starting the year off is the VISL’s oldest team, Vic West, hosting Gorge FC on Friday evening at Finlayson.

Vic West are celebrating their 125th Anniversary, and have made a concerted effort to showcase their top team. Some are calling Vic West the early favorites to top the division. The Greens look to have a strong squad with some Pacific FC influence. The Black n White stripes will have a tough start to the season, but will come out battling.

The second match of the season (and night) has Bays Utd hosting Nanaimo FC at Oak Bay High. A special match as this game will also serve another purpose – it is also the McGavin Cup Final!

Both teams had advanced to the Final, and wanted the start of season fixture to have even more meaning. Both teams look strong early, so this should be a great match up.

Saturday sees Powell River Villa hosting Westcastle at Timberlane Park in Powell River.
Both teams will be young. This will be a good test for both squads as they will need to work hard to maintain a solid position in the top flight.

Another north of the Malahat match up sees Victoria Highlanders playing at Sherman Road Turf against Cowichan.

Cowichan are definitely going through a rebuild year, and will be in tough against the academy squad of young kids that train almost every day. The Highlanders will be a top team this year, and will give plenty of teams trouble because of their youth, speed, and skills.

The final match up of the weekend, another up-Island fixture, sees Comox Valley hosting Lakehill.

Juan de Fuca has the opening weekend off.

Get out and enjoy some of the nice weather before we slip into the rainy season. Support your local teams responsibly, and enjoy grass roots soccer.