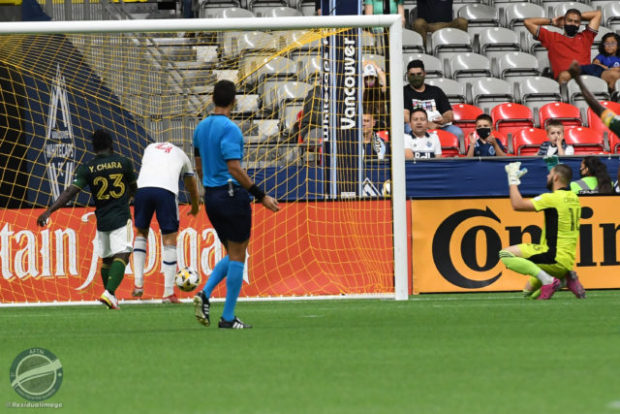 An own goal midway through the second half would lead to the demise of Vancouver Whitecaps’ 10 game unbeaten streak, as they went down to a 1-0 loss to their Cascadian rivals Portland Timbers at BC Place on Friday evening.

The deciding goal came 21 minutes into the second half when Ranko Veselinovic directed a Felipe Mora shot into his own net. Disappointment was etched all over the face of the Serbian centre back and it was a big blow to the Whitecaps’ playoff hopes.

The Timbers carried the majority of play in the opening stages, their best chance falling to Mora five minutes in but he blasted his attempt over the net from a good position ten yards out.

Despite settling down the ‘Caps gave up another chance in the box on a counter attack but this time Dairon Asprilla was not able to get enough on his header which was easily snagged by Max Crepeau.

A couple of flicks from Brian White around the the 40th minute mark would be the Whitecaps best chances of the opening half. It was another flat first half performance, and yet again, the ‘Caps looked like a different team after the restart.

There was some back and forth between the two teams with some more intensity in the first 20 minutes of the second half, with Cristian Dajome fired up and causing issues for the Portland defence. But Vancouver couldn’t turn their possession and play into the opening goal.

And it was to prove costly soon after when Veselinovic’s poor play in the 66th minute put the ball into his own net and the visitors ahead, leaving Vancouver with a lot of work to do if they were to salvage anything from the game.

After falling behind Vancouver increased their urgency with their best chance on target in the 77th after a corner was cleared and sub Deiber Caceido unleashed a fierce shot from outside the box that beat Timbers keeper Steve Clark but was blocked off the line by Claudio Bravo.

That was to be the closest Vancouver came to levelling things up, and although the Whitecaps poured more pressure on in injury time, which produced some scrambles in the Timbers box, they couldn’t get any clear shots on goal, and Portland saw out the game and headed back down to lower Cascadia with what could prove to be a huge three points in the playoff picture.

Except for Caicedo’s shot that was cleared off the line, the ‘Caps were unable to test a Portland keeper who most consider to be their weakest part of the lineup. Even their clear advantage in earning corners (10-0) were unable to create dangerous shots on the Timbers goal.

With the loss and the end of their unbeaten streak the Whitecaps complete their four game home stand and now make their way back on the road traveling to Colorado taking on a dangerous Rapids side. With every point at a premium now, there is little room for error and dropping three points at home to one of your playoff rivals could prove to be the first nail in the Whitecaps’ coffin this season. 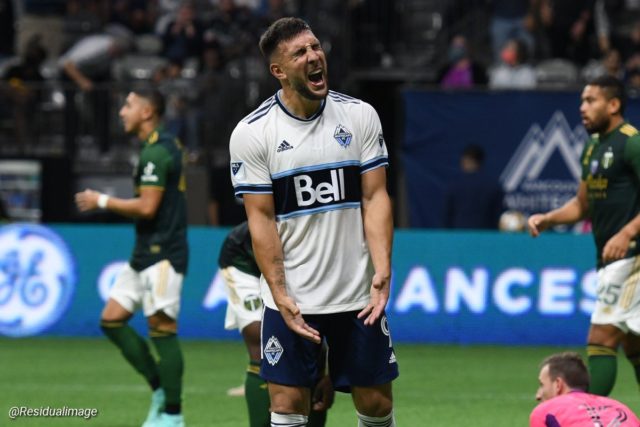 “It was a really tough game and we knew that they’re an experienced team, so you know the tackles but also kind of losing time. We knew that it was going to be a battle. We fought well, it was entertaining for the people too, unfortunately we didn’t score at the end, but the push that we did at the end showed that the team not only is in a good moment technically and tactically, but also physically.”

On not scoring in the first half:

“I think it’s an issue in the sense that sometimes we need to take a slap to create momentum, it happened last time with Austin, it kind of happened today, actually it was much better in the beginning of the second half when we were 0-0. We need to work on that, I think to have more awareness that we are a good team, we don’t have to be scared to try to go at them from the beginning, and try to be really aware that we can make it. The performance like tonight showed us that we could make it at the end of the season.”

“First half it’s mostly a game that is played in the midfield, you know it’s a midfield battle. Then second half, it became a little bit more transition where we were pushing to get the tie at the end, and then for them, they’re a good team and counter basically. It’s a team that will hurt you on counters and then some small details. The goal is unfortunate because the shot, I don’t even know if the shot is on target to be fair, I don’t think it’s coming into the goal area, it’s just traveling across so it’s a hard spot to be in, and it’s unfortunate. Then we push to get the equalizer and we had our moments, we had our chances, we didn’t put them away and that’s the thing. We lost tonight and we have to basically have a nice week of training, hard week of training, and then go to Colorado and get the points.”

On the message at the end of the match:

“Tough game for us. We had chances, but we really couldn’t finish tonight. At the end of the night, they had some luck. They had, I think, by my count only three chances and they just got lucky and got their goal.”

“We have to look at the errors we’re making at the back, work on those, and keep working on our offensive shape up top. We have to go back to the intensity we’ve been showing in previous games and having that mentally to be able to push guys forward. We’ll keep working on those things.”