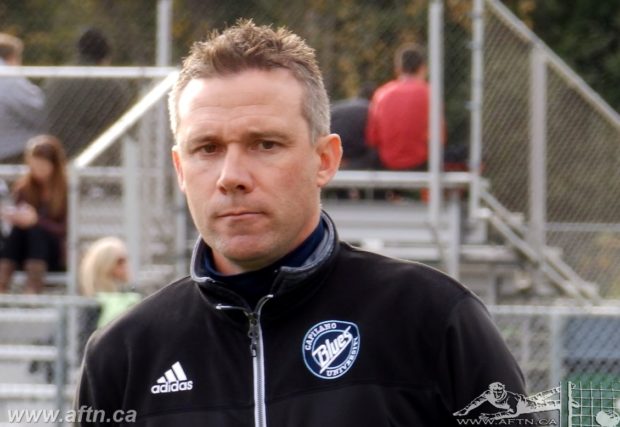 Fourteen seasons into his head coaching career at Capilano University Blues and Paul Dailly’s drive for success is as strong as it’s always been.

Dailly watched his side lift back to back PACWEST titles at Burnaby Lake on Saturday night, seeing off a spirited fightback by Douglas College Royals before coming away with the 4-2 win.

Capilano looked to be coasting having established a three goal lead by half time, but they allowed a ten-man Douglas side to come storming back and reduce the deficit to one before Keith Jackson fired home the assurance goal six minutes from time.

The victory and the silverware naturally delighted Dailly, but he was less than happy with his team’s laboured second half performance and knows they will need to defend better if they are to make an impact again at next month’s Canadian College Athletics Association (CCAA) nationals in Alberta.

“The game could have been over at the half as far as I’m concerned,” Dailly told AFTN after the Blues Championship win. “At 3-0 we were coasting, but we told them at the half it’s not over and the next one’s important.

Dailly has assembled a very talented squad at Capilano. The seeds were sown with last year’s PACWEST Championship and a run to the CCAA Championship game, and his side have continued to grow and look even better this time around.

Last year’s PACWEST title was the Blues’ first since 2008. That one had a lot of meaning for the former Whitecap, but to now go back to back takes that to the next level.

“It means a lot,” Dailly admitted. “It means a lot for the players. We’ve got a great group of guys this year. Same as last year. I’m just happy for them. Ecstatic for them. It’s always nice to be on the winning side, especially in a game like this.” 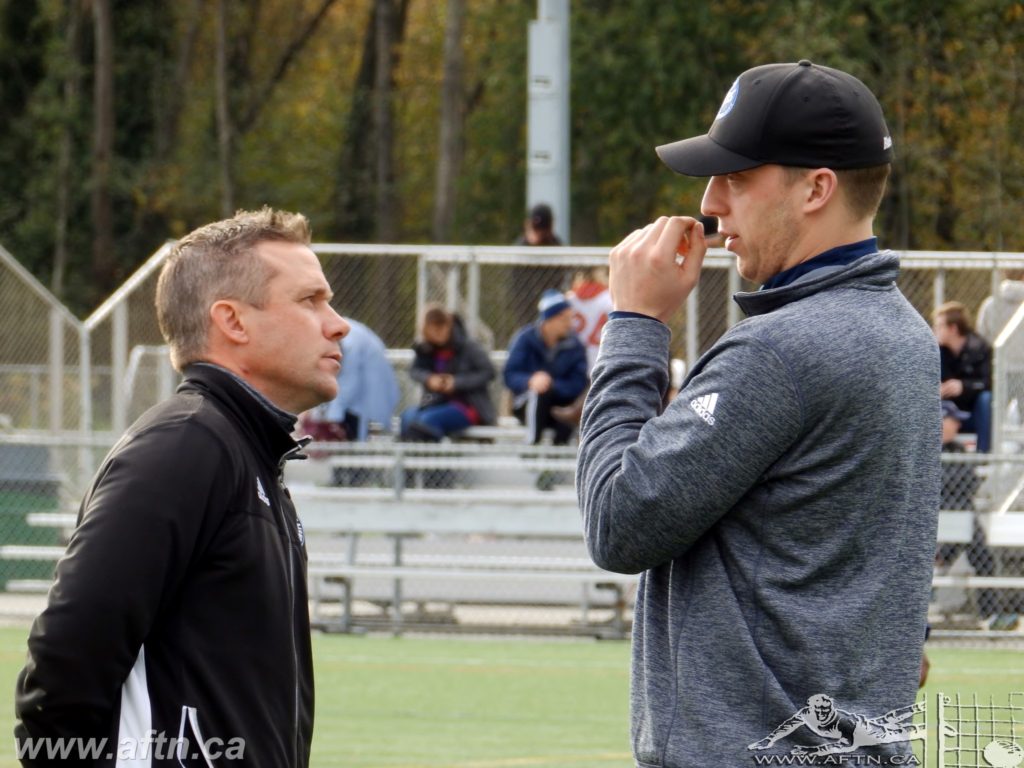 It’s been a fantastic PACWEST season for Capilano as a team and on a personal level for Dailly as a coach.

The Blues went undefeated over the regular season, going 10-0-2 and letting in only six goals along the way and scoring 34. They hit nine more over their two playoff matches, with PACWEST leading scorer Keith Jackson adding another four to his tally and taking his season’s goals to 15 so far.

Jackson was one of four Capilano players to be named to the PACWEST Conference All-Star team, and Dailly picked up PACWEST Coach of the Year honours for the second year running.

“You never expect to be undefeated, I don’t think,” Dailly told us. “Or hope for it. Now that it’s happening, it’s been fantastic. You’re almost looking for a little setback early on where you can regroup and say alright, we’re not quite as good as we think we are.

“But credit to them. They’ve kept their eye on the prize and haven’t got too far ahead of themselves.”

Capilano now have a week off to prepare for the CCAA national championship in Fort McMurray, Alberta. The Blues will be looking to lift their first national title in eight years, and their seventh overall following their successes in 1988, 1990, 1991, 1996, 2003, and 2008.

Those last two Championships came with Dailly at the helm, and with back to back CCAA titles as a player for Capilano himself in 1990 and 1991, he certainly
knows what it takes to get the job done on the national stage. That experience, along with the 170+ appearances he made with the Vancouver 86ers/Whitecaps over nine seasons, will be crucial to his young side.

A number of his squad also got a taste of the nationals themselves last year in Saint-Lambert, Quebec. It’s an experience they’re looking to learn from and one that has left them out for a little revenge after losing the Championship game 5-3 on penalties after holding the top-seeded Humber Hawks to 0-0 over 120 minutes.

This time around Capilano head into the nationals as second seeds, once again behind Humber, but they’ll be heading to Alberta full of confidence after their achievements already this season.

“Confidence is sky high,” Dailly admits. “It should be. They deserve it. They’ve played well all season long. We’ve got a bitter taste from last year when we lost in the national final out there. There’s a number of them that were there last year and they know what it takes now to get to the next level.

“So obviously we want to go out there and win it but we’ve got to take it game by game. The first game’s going to be the toughest one.”

Capilano kick off their quest for another national title on Wednesday November 9th, with the Championship game set to take place three days later on Saturday November 12th.