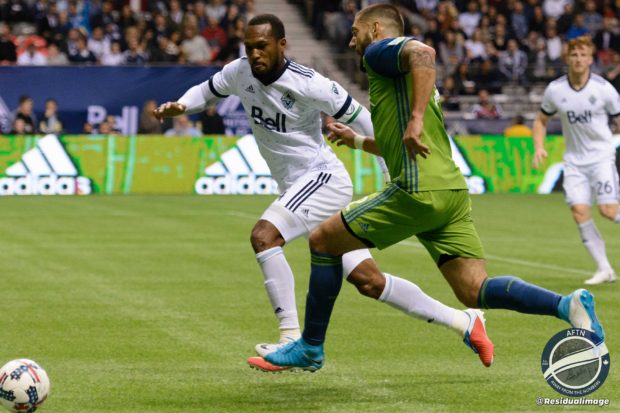 Vancouver will continue their journey down the MLS Cup Playoffs road when we face an all too familiar foe from Seattle at CenturyLink Field on Thursday night.

The defending MLS Cup Champions will have a tough challenger to face. With a 0-0 bore draw in Vancouver the stakes are very high in this leg. It’s do or die for both teams. This is a game that Seattle must win, by any scoreline. If it is a tie or the Whitecaps come away with the win, then the Sounders are done for.

What makes this game even more interesting is when you look at the records of the teams. Seattle has been fantastic at home this season. They are unbeaten in 13 games in MLS. That is a fortress.

The Whitecaps are going to have to find a way to create more offensive pressure if they want to find a crack in the fortress they can exploit. It gets even more intimidating for Vancouver when you realize we have not beaten Seattle in their house, or found the back of the net, the last two meetings there going back to last season.

Whether Robbo can get them to be more creative is doubtful. This team has a style and it is going to stick to it through thick and thin – sit back, give up possession, soak up the pressure, and hit on the counter. This is certainly a game where they will need to lean on that style if they want to find a result.

We know that Robbo likes to rotate the squad, but is this the kind of game that allows that? There could be some knocks for the Whitecaps players. Robbo said that Cristian Techera and Yordy Reyna were “likely to start on the bench” again after picking up knocks in the win over San Jose. Is this real or is it a ruse? We’ll see at kick off time, but if we want to get a result we need to get the best players out on the field this game. If there’s any way they can start, they have to.

I think that over the last couple of games Brek Shea has looked dangerous and it is never a bad idea to have another tall, strong, fast player out on the wings. Dangerous on the counter and a set piece threat, he showed against San Jose that he can make clinical passes to set up players, grabbing two assists to Nicolas Mezquida. I would like to see him start ahead of Christian Bolanos.

Although Bolanos brings something different, I just don’t see him being the difference maker we need. If we want to get a bit more possession then playing Bola would be needed, but is that even in the gameplan? Shea has been as direct as you can be and if the ‘Caps are going to concede possession, you may as well have him run like a gazelle to take advantage of that space.

If we are going with physicality on one wing, we need some creativity on the other and if fit to start, Techera is the man. He scored an amazing free kick against San Jose and he has great set piece delivery (a key for any ‘Caps win in Seattle). But can he play from first kick or will we see the ‘Caps knuckle down and try and keep themselves in the game before unleashing the Bug late on?

Speaking of Hispanic flair, the need to have Reyna on the pitch for as long as possible was never more evident than in Sunday’s first leg. His creativity and dynamism, and his commitment to defense were sorely lacking last game. That’s not to slag Nosa Igiebor, but it’s a tough task to have your first games be in the MLS Playoffs.

If both of them can go, Fredy Montero has a new threat. His ability to play with Techera and Reyna are what makes this counter attacking team tick. Again, you saw on Sunday the isolation the Colombian faces without his two attacking cohorts on the pitch alongside of him, taking some of the offensive weight off his shoulders.

These three are the Whitecaps main goal scoring threats. If they are not starting the Whitecaps are not going to have a lot of options, or hope, for getting goals. They are the top three scorers for the ‘Caps and it was pointed out that when they start together, no team has beaten the Whitecaps. That is not a coincidence. It was plain to see in the first leg the ;Caps had no ideas going forward. This trio are the brain, central nervous system, and muscle of the Whitecaps attack.

Behind them we need to have Aly Ghazal and Tony Tchani manning the defensive midfield positions. Thank God that Ghazal only got away with a fine for that headlock, because the MLS Disciplinary Committee has been harsher on lesser things this year. Thankfully though, there seems to be a bit more of consistent approach to fining hands on faces, rather than extended suspensions.

The backline has seen Jake Nerwinski continue to be a force. He loves to get forward, and if the Whitecaps score a goal I would not be surprised to see him set the final pass to set it up. Tim Parker and Kendall Waston continue to be rocks at the back, and hopefully one of them can also get on the end of any set piece that the Whitecaps get.

Marcel de Jong has looked fantastic so far on the other side of the central defence and his passing has been looking better and better. It’s also worth noting that the Nerwinski/De Jong full back pairing is different from the Williams/Harvey on that struggled in September’s 3-0 loss and adds a different dynamic to what was seen previously from Vancouver.

The goalkeeping conundrum is interesting but it looks like Stefan Marinovic has won that job for the rest of the playoff run, so we can put that to bed now.

Considering how strong Seattle can be, they may just risk some of their recently injured players, like the battling midfielder Osvaldo Alonso. They have the creative hurricane that is Clint Dempsey and Nicolas Lodeiro. They will be looking to make something happen and use home field advantage. They may just try to get through by repeatedly attacking either of the Whitecaps fullbacks. I back Nerwinski and de Jong to take care of them though.

Whether forced or unforced with the Reyna and Techera knocks, will there be any rotation?

Can the ‘Caps be creative on the counter and generate offence?

After being blanked on Sunday, can the set pieces become deadly again?

Clint Dempsey – Back from suspension, where he can seemingly do pretty much what he wants with little punishment, can he have an impact? He is the MLS poster boy. Need I say more.

Nick: 1-1. We may steal a goal off a counter, but Seattle will get a goal in their castle. Still enough to get to the next stage of the playoffs though.